To write about Seamus Heaney feels somewhat of an empty feat, he of so many words and I of so few but sure, here I am trying. In our family Seamus is spoken of like another family remember, his quips and musings repeated at gatherings like a shared memory that we never tire of hearing. 'Digging' is a firm favourite of ours as it is amongst most families in Ireland who identify with the audible descriptions of our ancestors who toiled the land before us while we, the fortunate ones, escaped the fields,

"By God, the old man could handle a spade"

While I struggle to resurrect the words to describe the impact Heaney's work has had on me, I'll settle for telling you all about the wonderful museum, HomePlace, that is dedicated to his life's work and his legacy. My Granny and Aunties had been to HomePlace earlier in the year and had raved about it for months afterward. The extensiveness of it is what impressed them most, so much so they didn't even have time to visit the upper floor as they had scheduled tickets for a talk given by Jennifer Johnston not long after arriving. 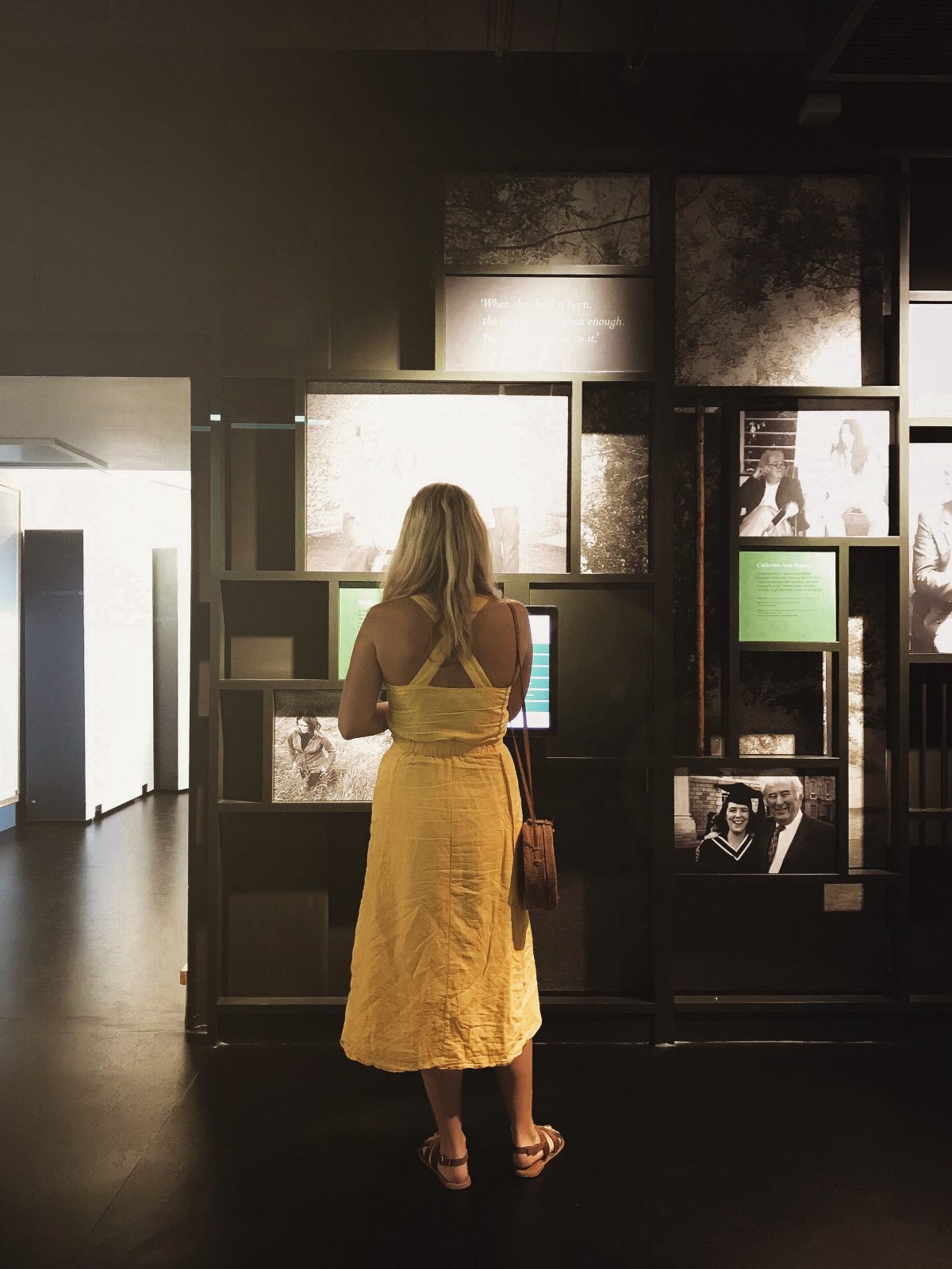 After hearing so much about the museum from my family I knew I had to darken its doors eventually and when Ireland's Blue Book invited me to go the morning after our stay at Ardtara, well of course I leapt at the chance. To be amongst his work on the very bit of land that spawned him and the words that inspired him felt important so off we went to drive the 15 minutes up the road to Bellaghy. 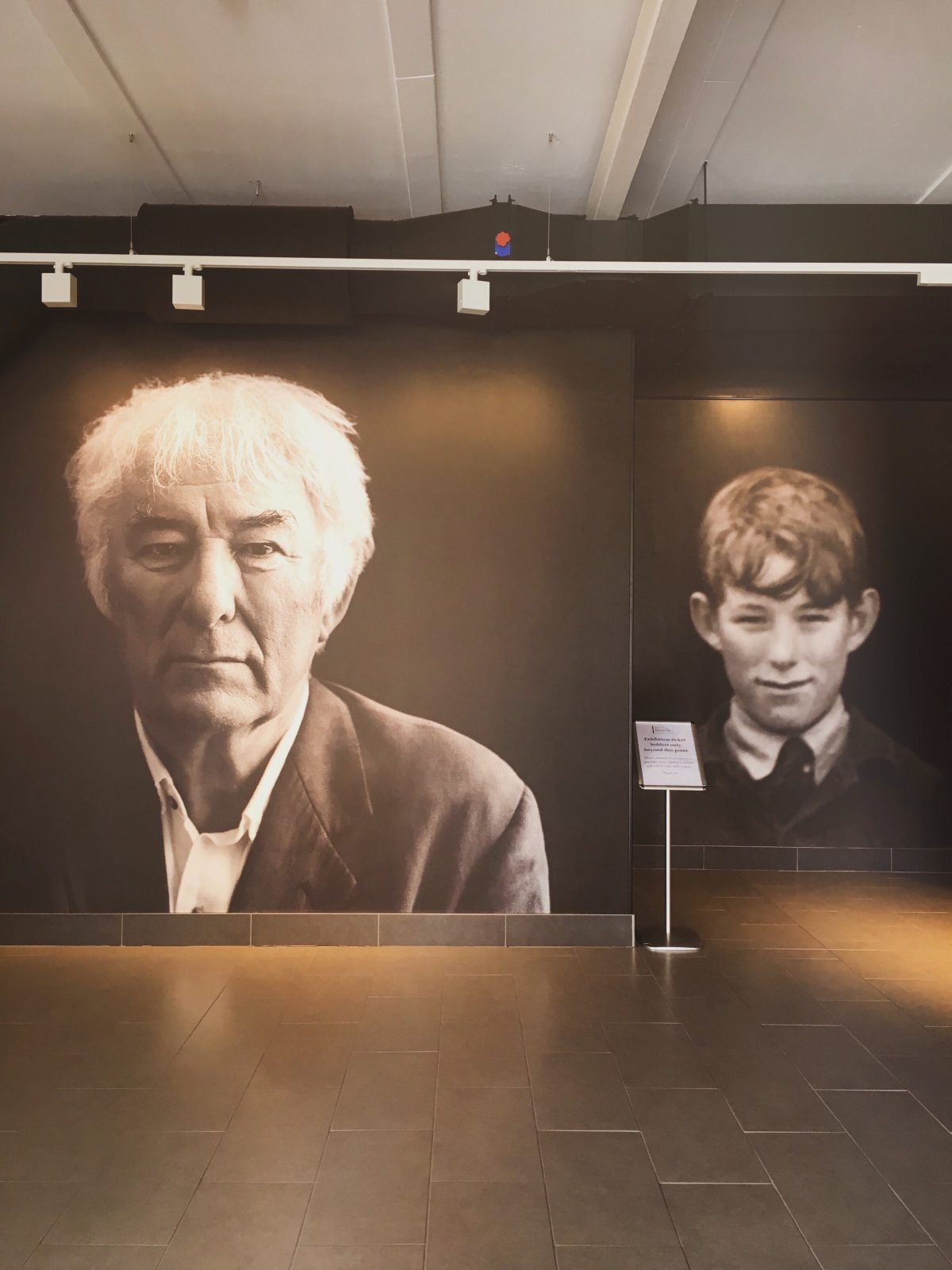 When walking through the doors of HomePlace you are greeted by a portrait of Seamus himself in his later years with another old photo from his youth placed just behind close to the words:

"I rhyme to see myself/to set the darkness echoing"

To read Heaney's words is one thing but to hear his own poetry spoken from his own mouth, forming the words he himself had written, is another thing entirely. And yet, before even knowing what his voice sounded like it was as if I was already reading his poems with that same deep gruff voice that hadn't lost it's Derry drawl; it was warm and familiar. As we walked around HomePlace we were prompted to listen to many of his poems read by Seamus at various parts of the exhibition like Midterm Break when we revisited his childhood, Route 101 which he wrote for his daughter and In The Attic, one of his final poems. 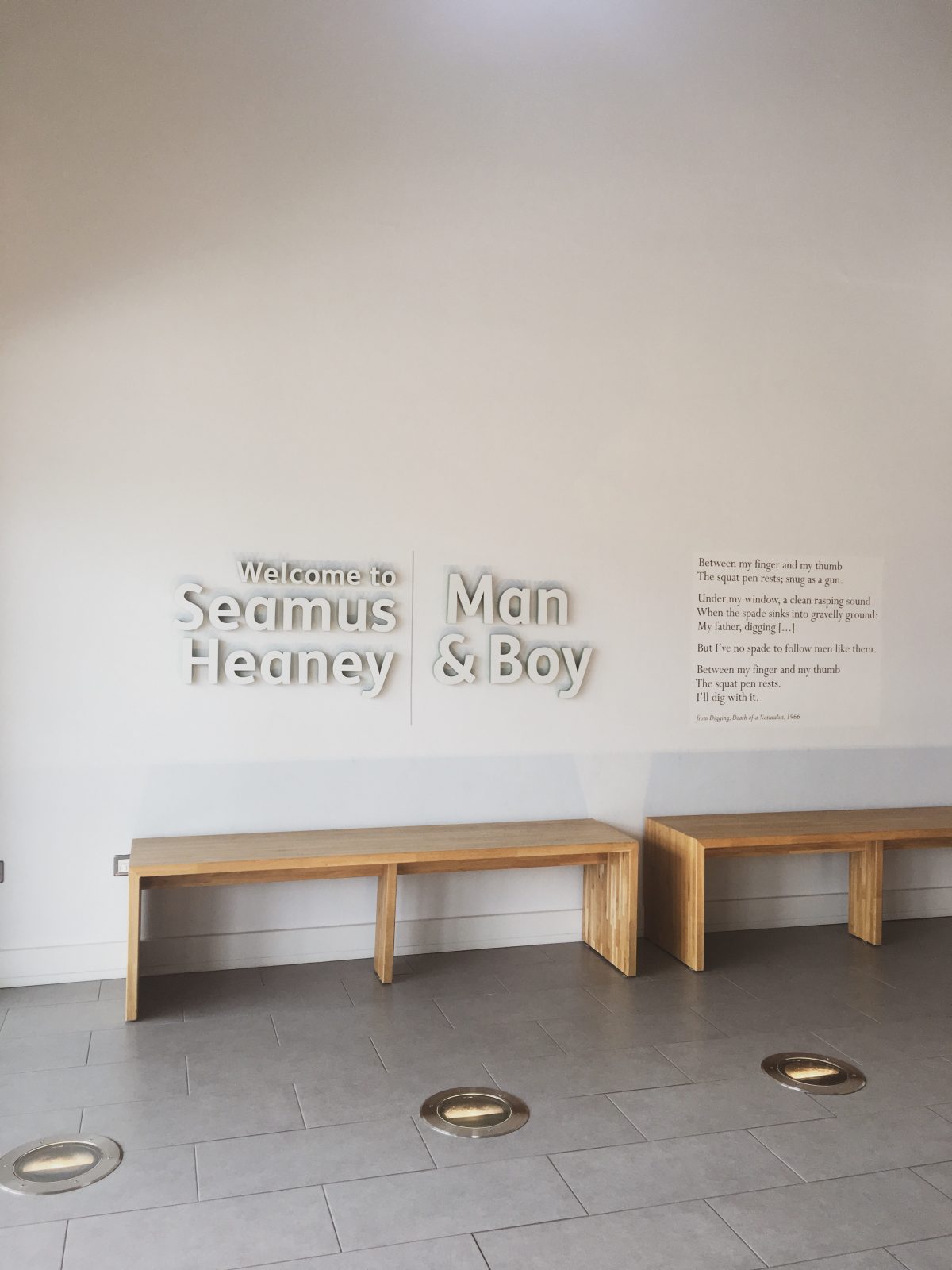 There was so much of his work that I hadn't read before and what struck me most as I listened and watched the videos of fans who have been influenced by him (ranging from famous figures to schoolchildren) was just how accessible Heaney's work is. It has no airs or graces but rather it's its very earthiness that enables any reader from across the board to feel the weight of the words. The ordinary is celebrated and the truth pours out in torrents making it impossible not to see yourself or others you know in them.

“Walk on air against your better judgement”

What perhaps isn't as well known is how harsh a critic he was of his own work. On the upper floor of the museum you can stand in a room that mirrors the attic where Seamus spent his time writing at home, skylight and all. In the replicate you can see copies of work Seamus corrected and re-corrected even after it was published. He never stopped editing and even criticised previous work in later poems.

"But when the slates came off, extravagant Sky entered and held surprise wide open"

Seamus' use of language has the capacity to transport so many of us back to memories we maybe thought were lost forever and HomePlace provides the most beautiful journey to take us there. However I wasn't just left lamenting for my own youth after pouring myself over his poems; what I also felt was a real surge of gratitude to this man who provided us with so much. From watching old footage of him filmed in the days after he won the Nobel Prize in 1995 to reading the last words he texted to his wife right before he unexpectedly passed (Noli timere, Latin for "Don't be afraid"), I was so moved by the gift he has given so many and also the man who was behind the iconic words. 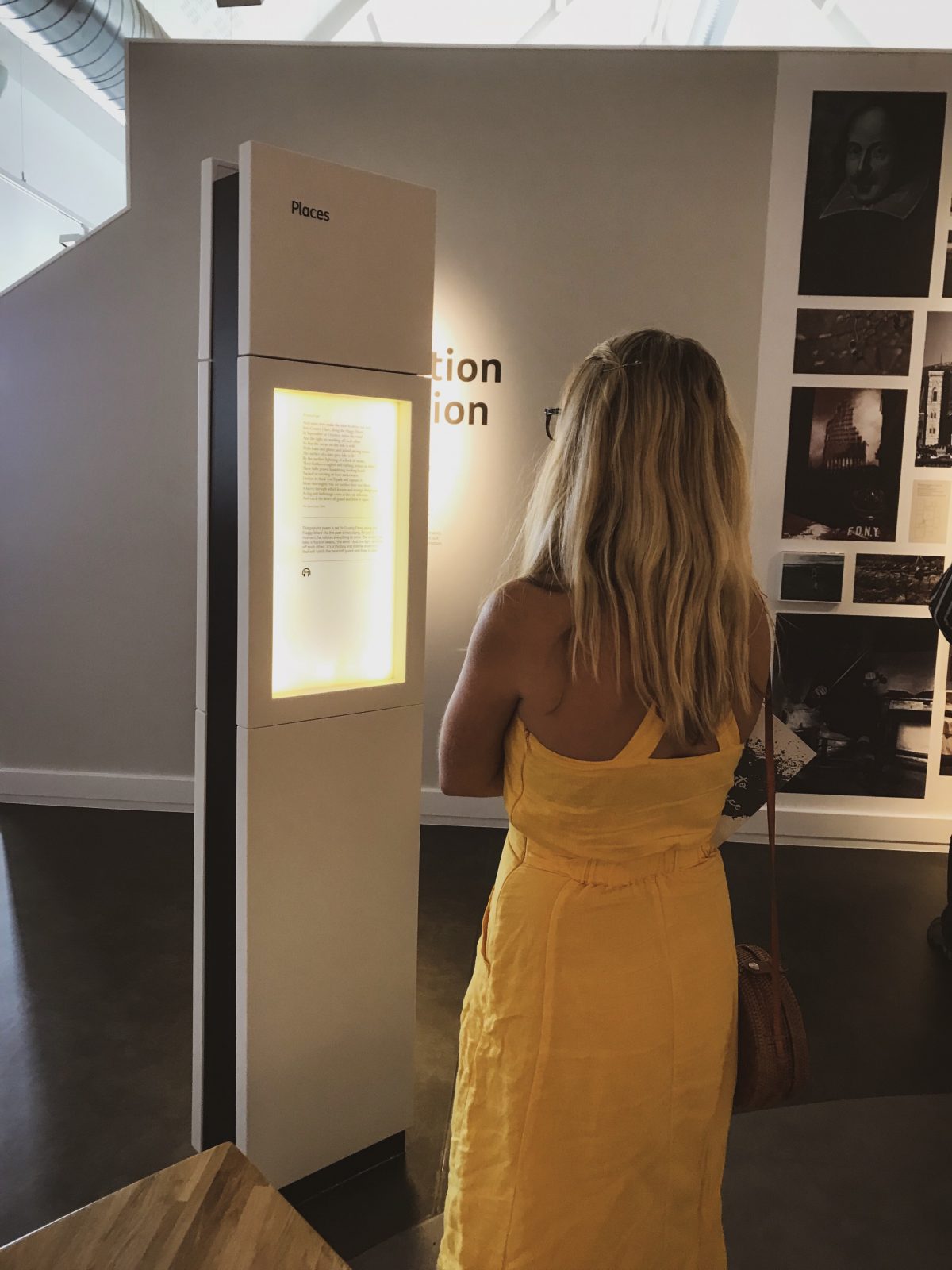 You might not know a lot of Heaney's work save for a line or two but that shouldn't stop you from visiting HomePlace. For any of us that were reared in Ireland it should be a national necessity to walk the grounds that inspired poems that have dominated Irish literature and the most important poet and wordsmith of our own lifetime. As I left HomePlace I was thinking of my Granny who has encouraged my love for poetry and reading throughout my adulthood and who has been struggling with illness the last few months. One poem stuck out the most that reminded me of her and how lucky I am to have had all those small moments with her by the stove in her kitchen, especially those moments shared in silence as I watched her finish the Irish Times crossword by the window and the light falling around her,

When all the others were away at Mass I was all hers as we peeled potatoes. They broke the silence, let fall one by one Like solder weeping off the soldering iron: Cold comforts set between us, things to share Gleaming in a bucket of clean water. And again let fall. Little pleasant splashes From each other’s work would bring us to our senses.

So while the parish priest at her bedside Went hammer and tongs at the prayers for the dying And some were responding and some crying I remembered her head bent towards my head, Her breath in mine, our fluent dipping knives– Never closer the whole rest of our lives. 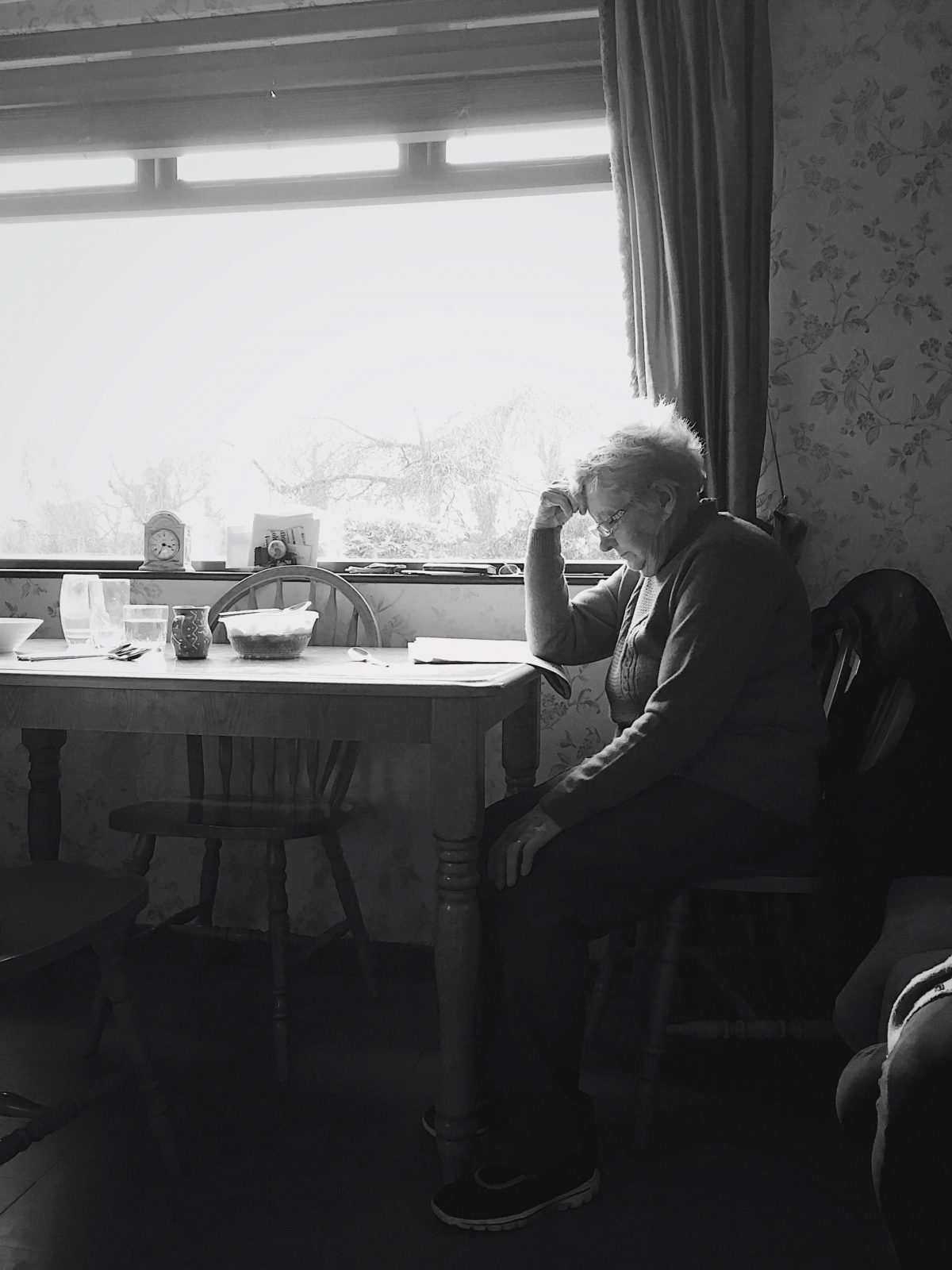