Stepping in to Spring in Connemara

It was Friday last week when we found ourselves making the 5 hour trek to Connemara. We'd deliberated over the trip for a while because it was a fair jaunt to go for only two nights and since Andrew is a freak when it comes to devaluing his car he worried that his precious might suffer with the distance (is this a guy thing or what?!). What convinced us though was our desperate need for a change of scenery and there is truly nowhere else for scenery in Ireland but Connemara! So off we went with the car packed and lovingly checked over by Andrew (she gets treated nicer than me sometimes) with podcasts at the ready to keep us occupied while we made our way south west. 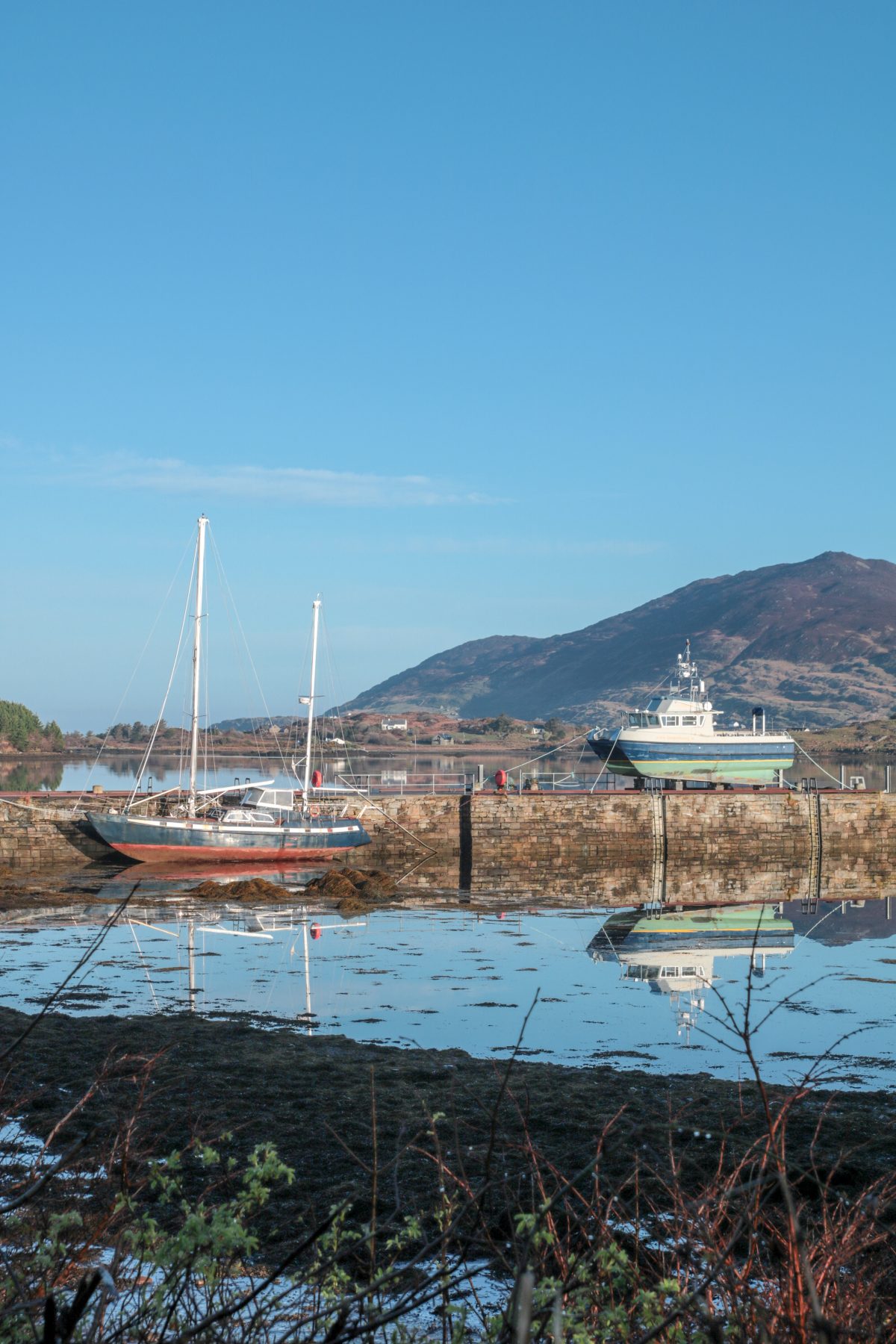 We had been invited down to Connemara by Ireland's Blue Book who I had worked with before when I had visited their beautiful Castle Grove property back in February. They have a collection of 54 historical houses, castles and manors scattered across the most romantic locations in Ireland and they had asked us to visit Rosleague Manor House, a pink ivy-clad piece of gorgeousness found just outside Letterfrack on the banks of Ballinakill Bay. 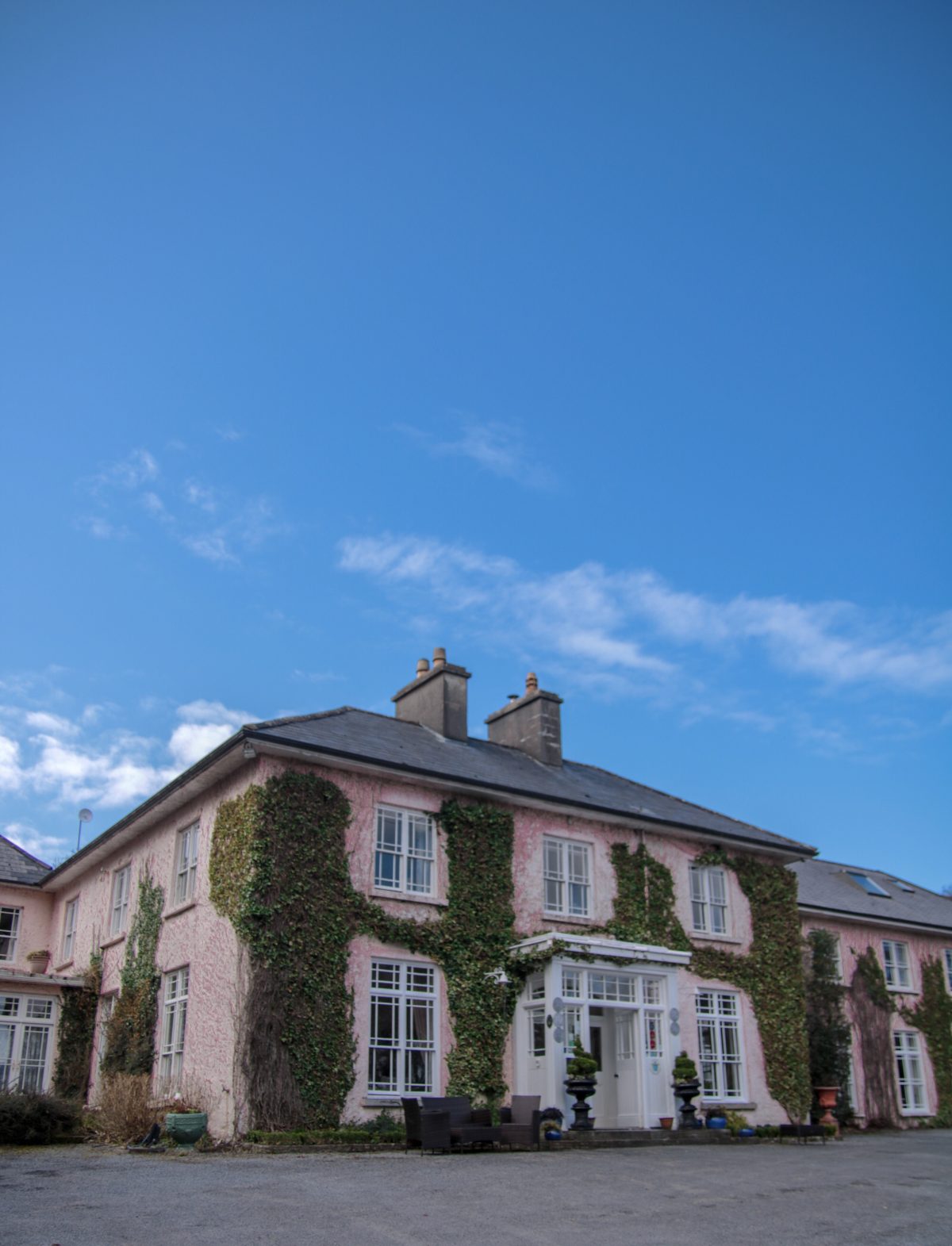 Before our trip we tried to plan for all sorts of weather since Connemara is well known for it's unpredictable climate. You might as well forget any sort of forecast checking because it seems to change every hour and you kind of just have to roll with the punches be it rain, hail or sunshine. We hadn't our hopes set very high coming in to Co. Galway that evening since the wind was howling through every gap in the car and the rain was lashing against the windows making the mountains look like sad brown smudges. Andrew wasn't too impressed after having driven half the day but I had this doggedly annoying positivity that we might get a glimmer of sunshine, even a pocket of blue sky would make it all worthwhile! 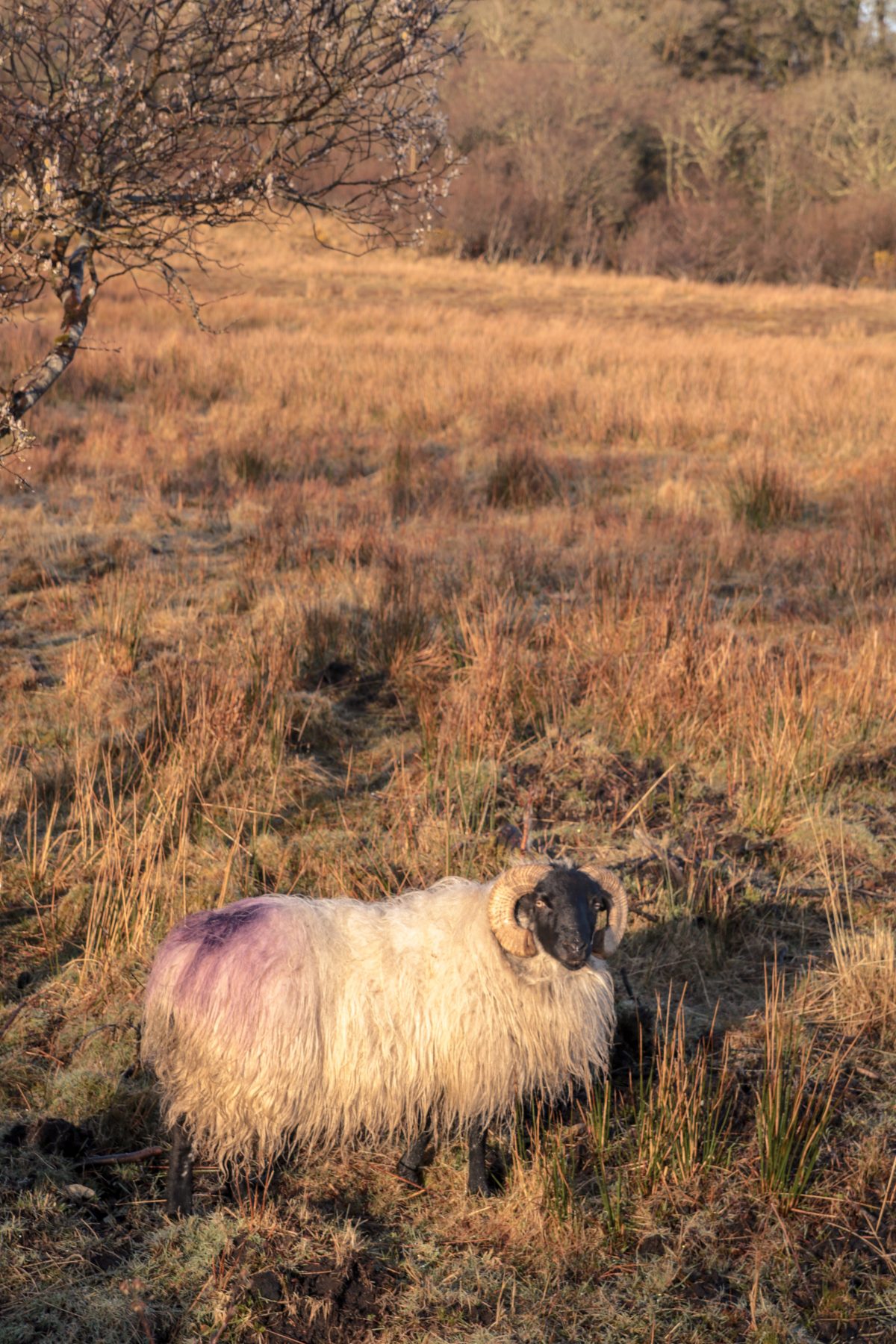 We finally arrived at the manor just after sunset (or at least we thought so since we hadn't seen the sun since we left Fermanagh) and were met by Mark at reception, a third generation owner and member of the Foyle family who took over the house 50 years ago back in 1968. Mark is incredibly warm and seeing how knackered we were from the drive, took us off to our room and organised a table for us to eat once we'd rested our bones for a minute or two. 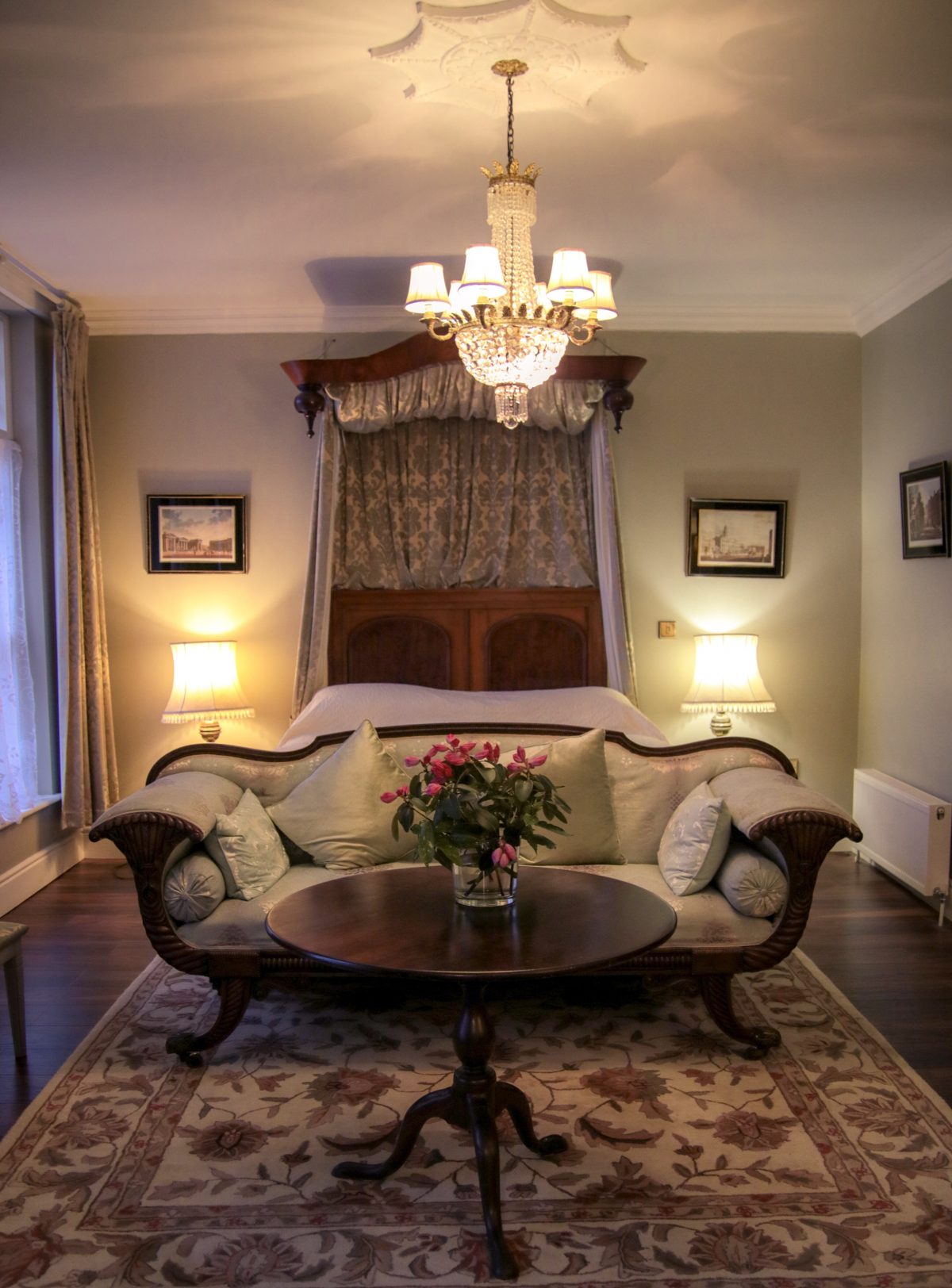 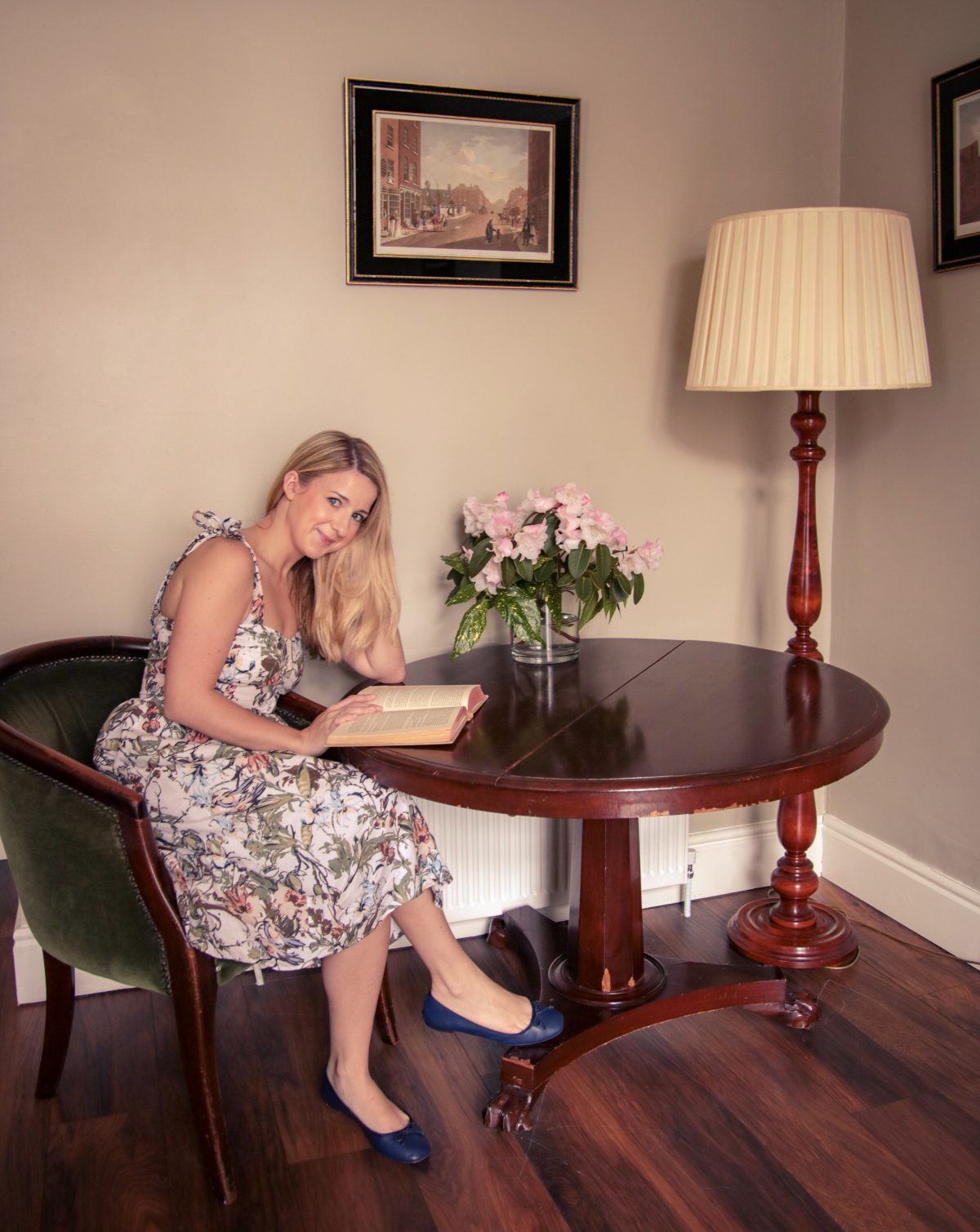 The room wasn't so much like a bedroom but more like a small apartment (my university flat was definitely smaller) with beautiful French windows that opened up to a private patio overlooking the bay. I looked at the huge bed and wanted to collapse in it immediately because who doesn't need to sleep at least one night of their lives in a curtained bed?? But we had dinner to eat first so we dragged ourselves to the dining room which, to our sweet relief, was surprisingly casual given the surroundings.

We settled back and ordered some French wine before tucking in to some local dishes. The manor restaurant takes advantage of the landscape surrounding them so all their dishes include the freshest ingredients from the doorstep. I went for the monkfish and Andrew opted for the Connemara lamb rack which we practically inhaled after a day on the road. Feeling very relaxed after a few glasses we went all the way and ordered desserts; creme brûlée for him (always if it's on the menu) and for me a chocolate piece of deliciousness that I can't remember the name of (it sounded French!) along with caramel ice cream - YUM! 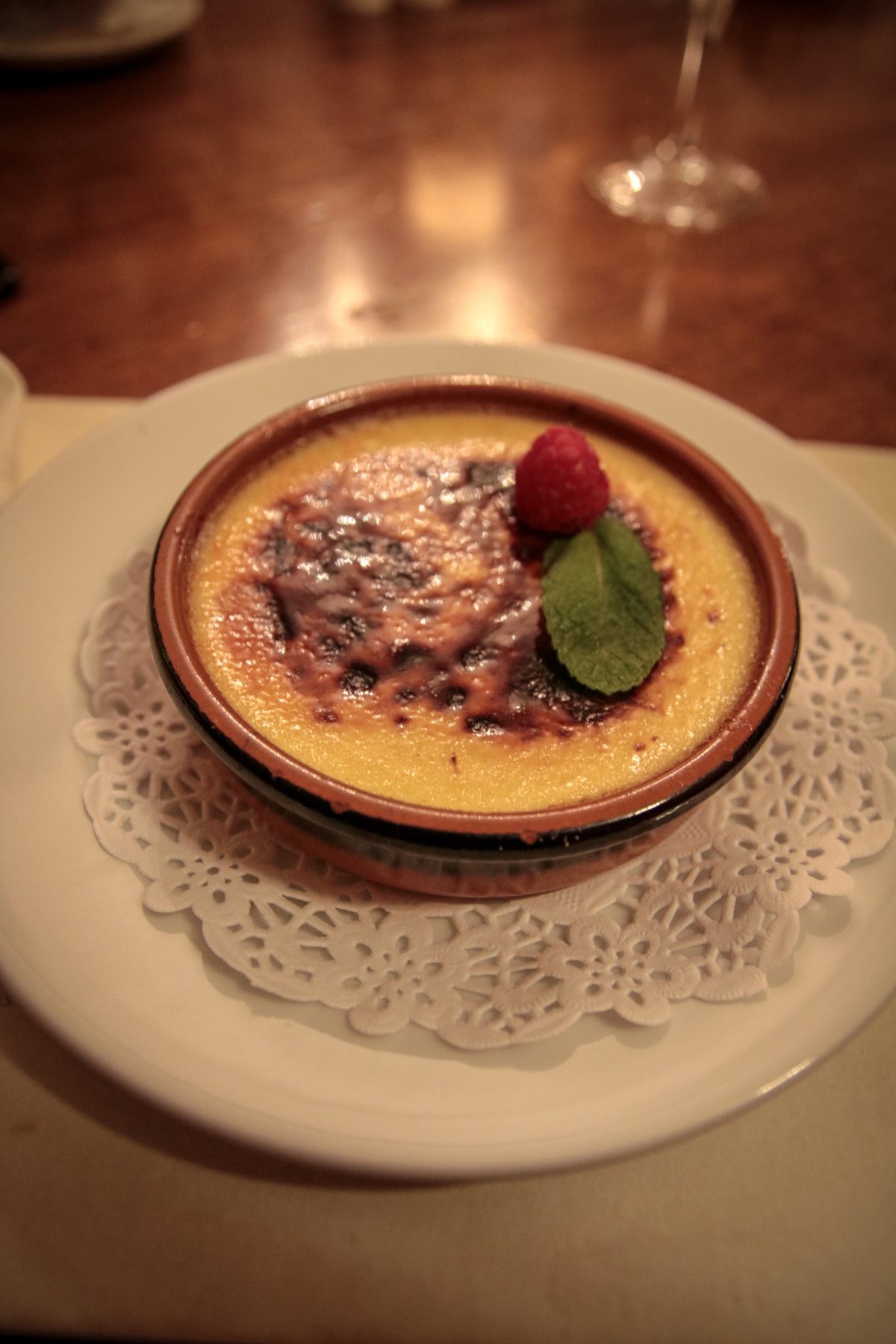 We trotted off to bed after we licked our plates and pretty much passed out as soon as our heavy heads hit the freshly plumped pillows. Having fallen asleep so early, I woke up just after sunrise much to Andrew's annoyance. I think his least favourite trait of mine is the fact I wake up early when we're supposed to be on our "holidays" while he wants to savour the lie-in as much as possible. My argument is I find quiet mornings to myself the biggest luxury of a holiday and when I woke up to see the sun beaming through the curtains I couldn't contain myself! 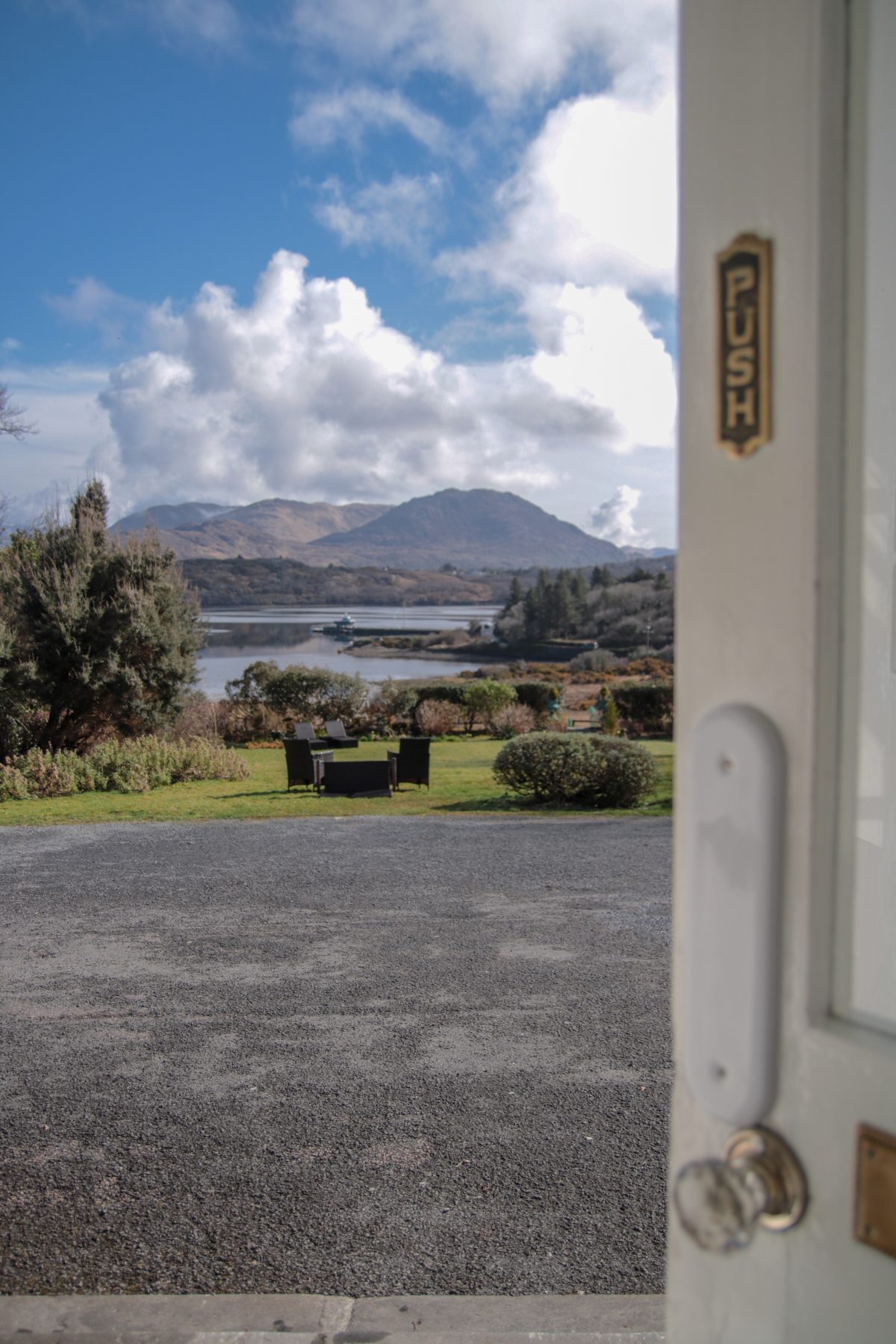 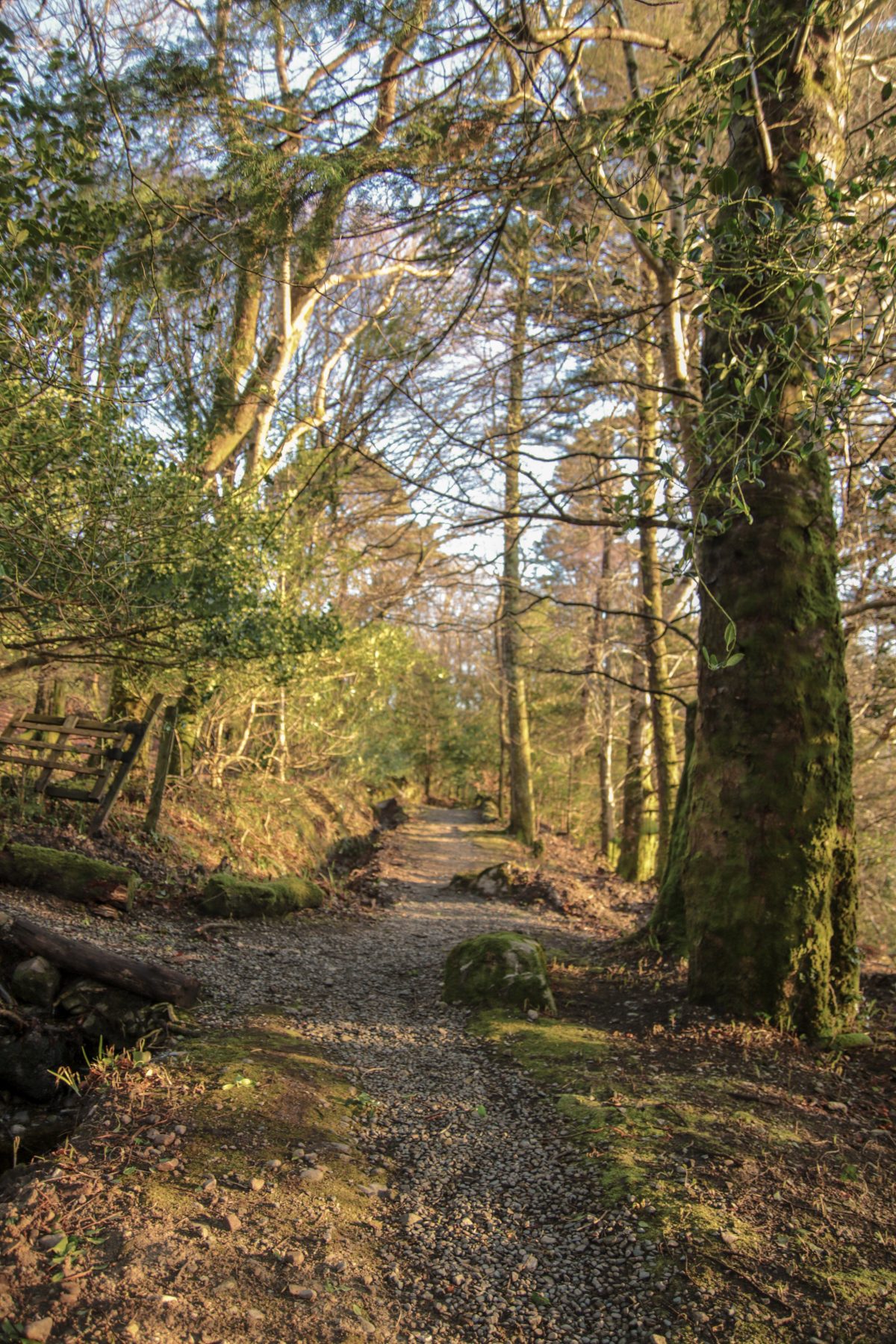 To give the man some peace I threw on some clothes, grabbed my camera and opened the french doors to explore the grounds of the house. I found a garden path that took me down to the bay and followed it as the golden light of sunrise bathed everything around me. When I reached the water it was like glass, the mountains reflecting like a mirror. I was dumbstruck for a few minutes as I tried my best to soak every second in because I had it all to myself and that felt so special. 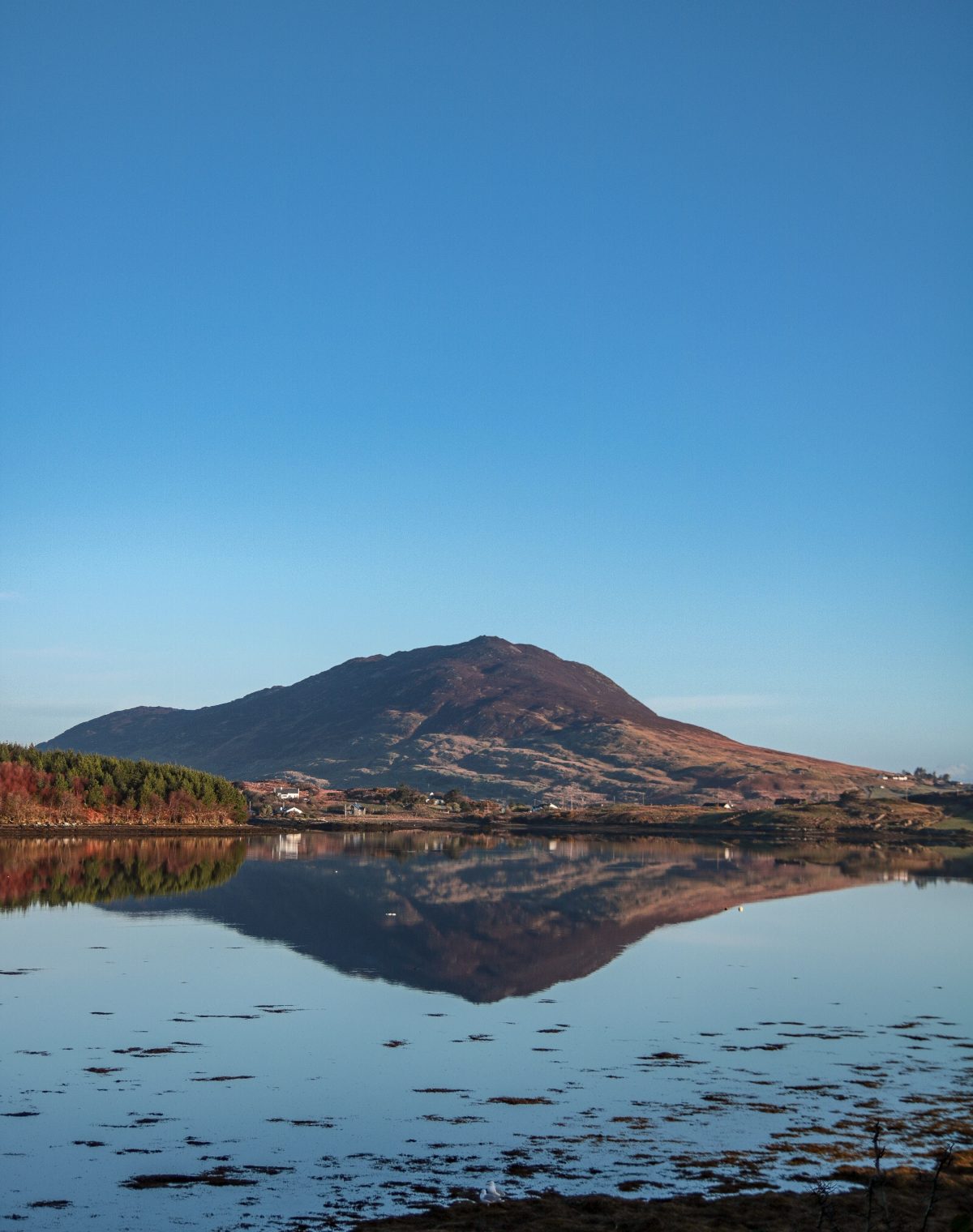 I watched the mist rolling across the far side of the bay for a while and kept walking along the beach to take a few photos. I was wearing pumps (rookie) and nearly lost them a few times in the beach which technically was more bogland in parts. I did as best I could to walk around but suddenly came to a stream that was pouring in the bay which was blocking my path. I was determined to see more of the view and I must have been still been half asleep because I just walked on through the stream like a complete eejit asking for a good dose of pneumonia! 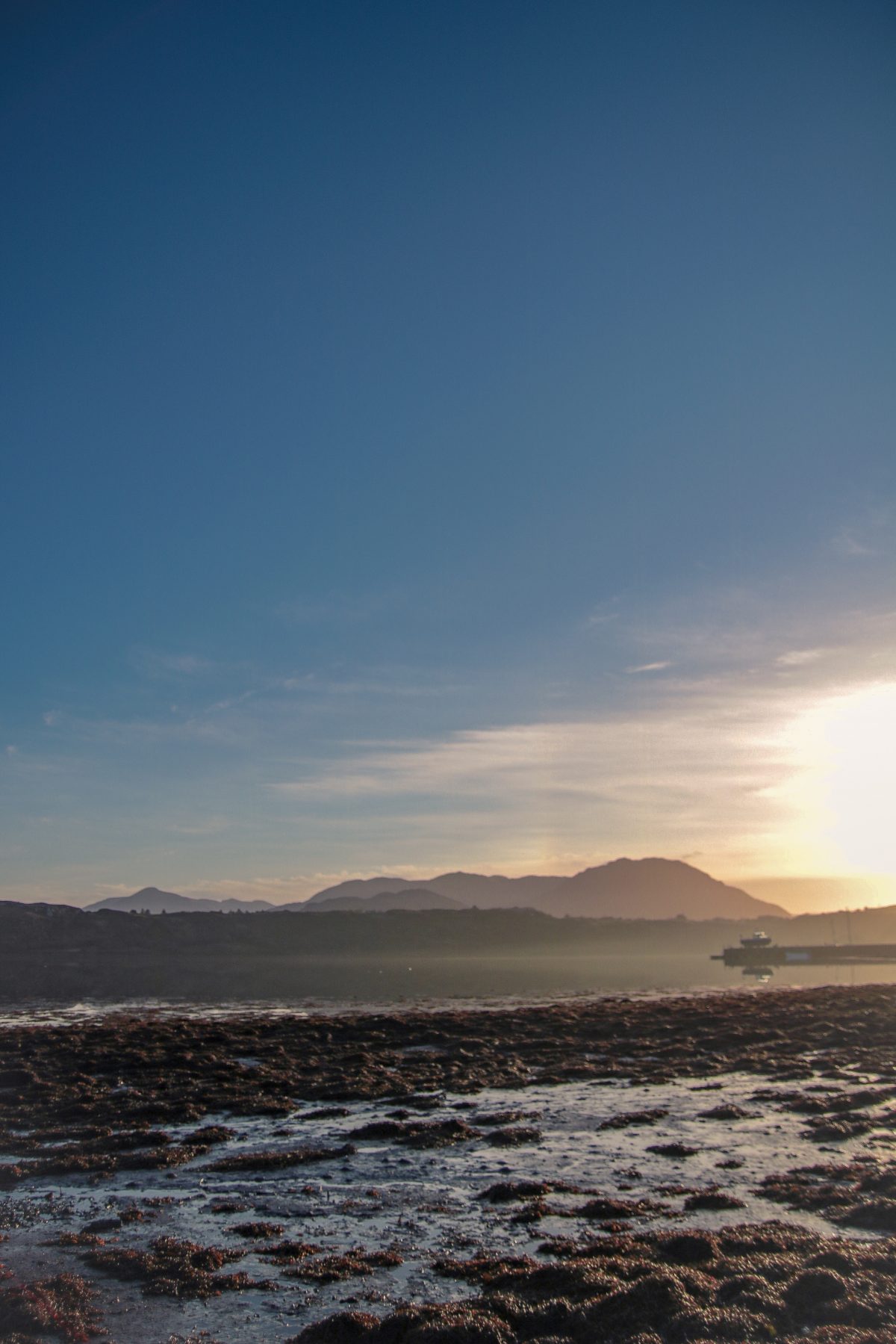 It wasn't so much cold as physically painful but I continued on because I'm a nutcase and tried to convince myself that this is what real photographers do. Or at least people with half a brain anyway. Wiggling my toes to bring them back to life I walked on round the bay and stood for about an hour in complete quiet, listening to the soft sounds of Connemara and smiling up at the blue skies that looked to be staying for the day. It's times like this that I'm glad I'm a morning person. 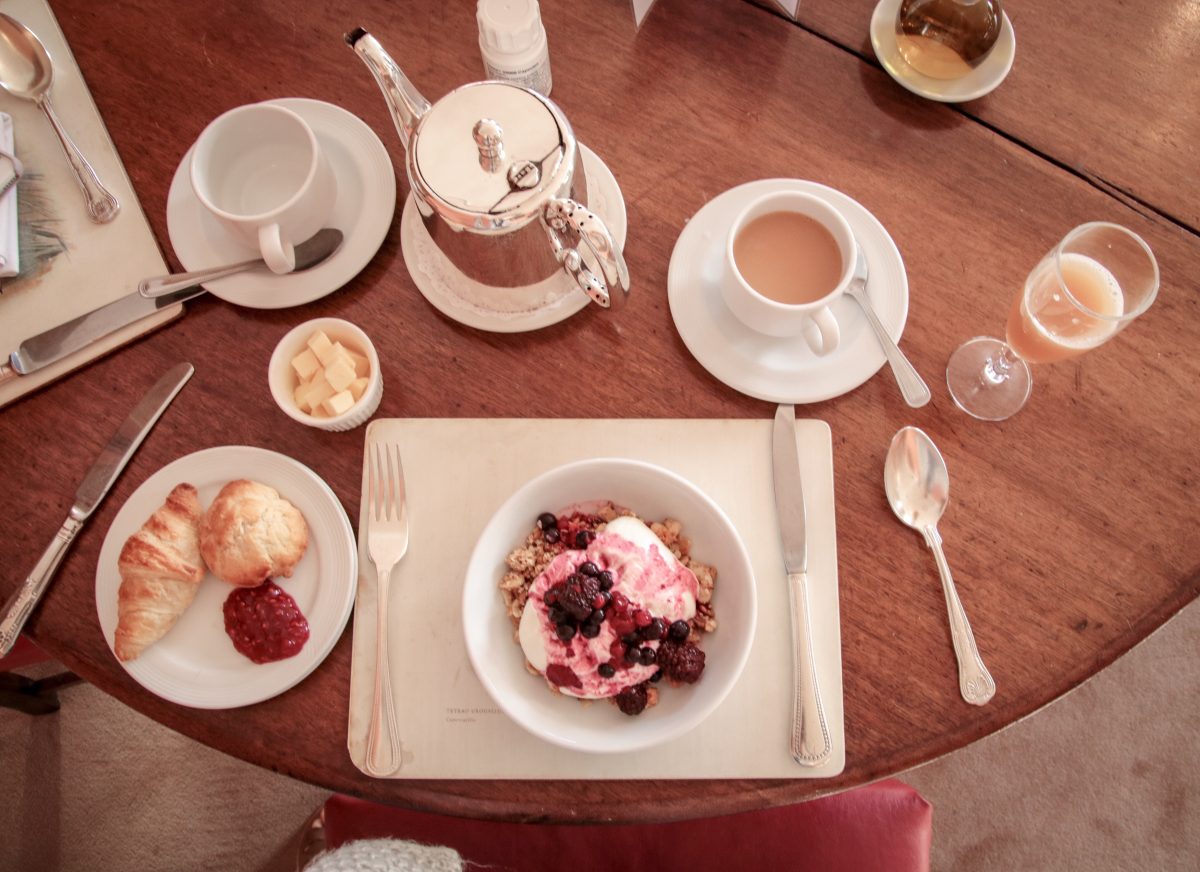 Eventually I realised I needed to head back and get a hot shower to warm my wee hooves and after that I tucked in to breakfast which consisted of the following: 2 x croissants, granola with yogurt and berries, local salmon with scrambled eggs, local apple juice and lots of tea. While I was making my way through my feast (while Andrew was still tucked up in bed) I noticed that the same staff were serving me as the night before. Over the course of the two days the people who worked there became so familiar it was as if I joined a small family in this beautiful big house. They would chat away to us, filling us in on local favourites and where we should head off to. Even the guests became familiar (and as the hotel is dog-friendly, their pets too!), with one particular German couple being my favourites. Later that evening I would walk past them on the front lawn where they had parked themselves facing the harbour with a beer to watch the sun go down. They called out to me, "We are like a couple from the 1930's!" as they both laughed together. My heart fell to pieces. 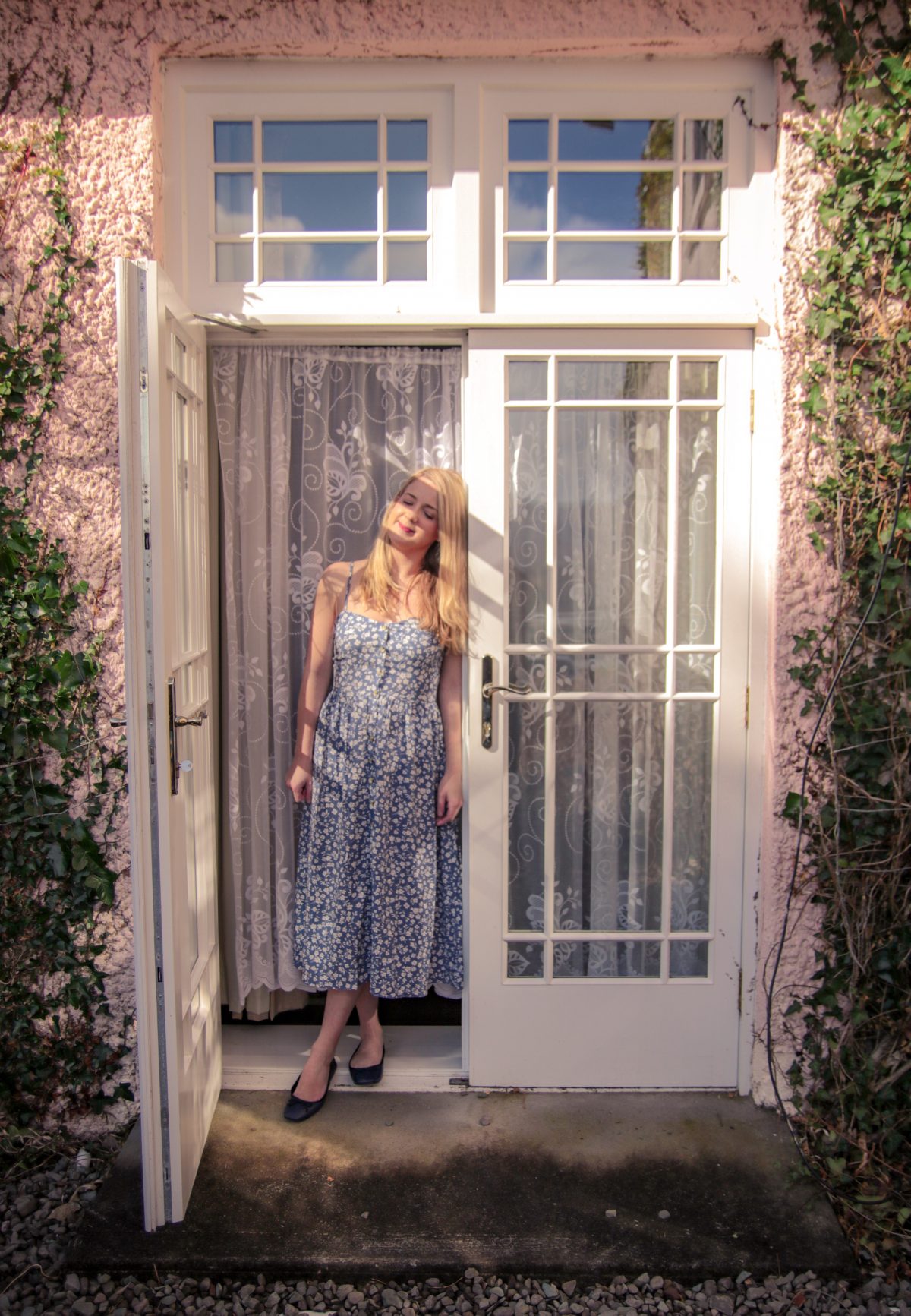 The rest of the weekend was spent exploring the beaches and roads of the countryside while we thanked our stars for the change in weather. Connemara truly shines when the clouds decide to part. l mean literally shines as the brown landscape dazzles gold in the sunlight. The colours that were muted on our arrival became saturated and I understood why so many poets and artists and writers have used this land as their muse. It awakes the dreamer, the wild restless soul seeking for something to make them feel alive. At the very least it made me feel so lucky to be able to call this island home and to have the bed at Rosleague to sleep in after a day of adventure. 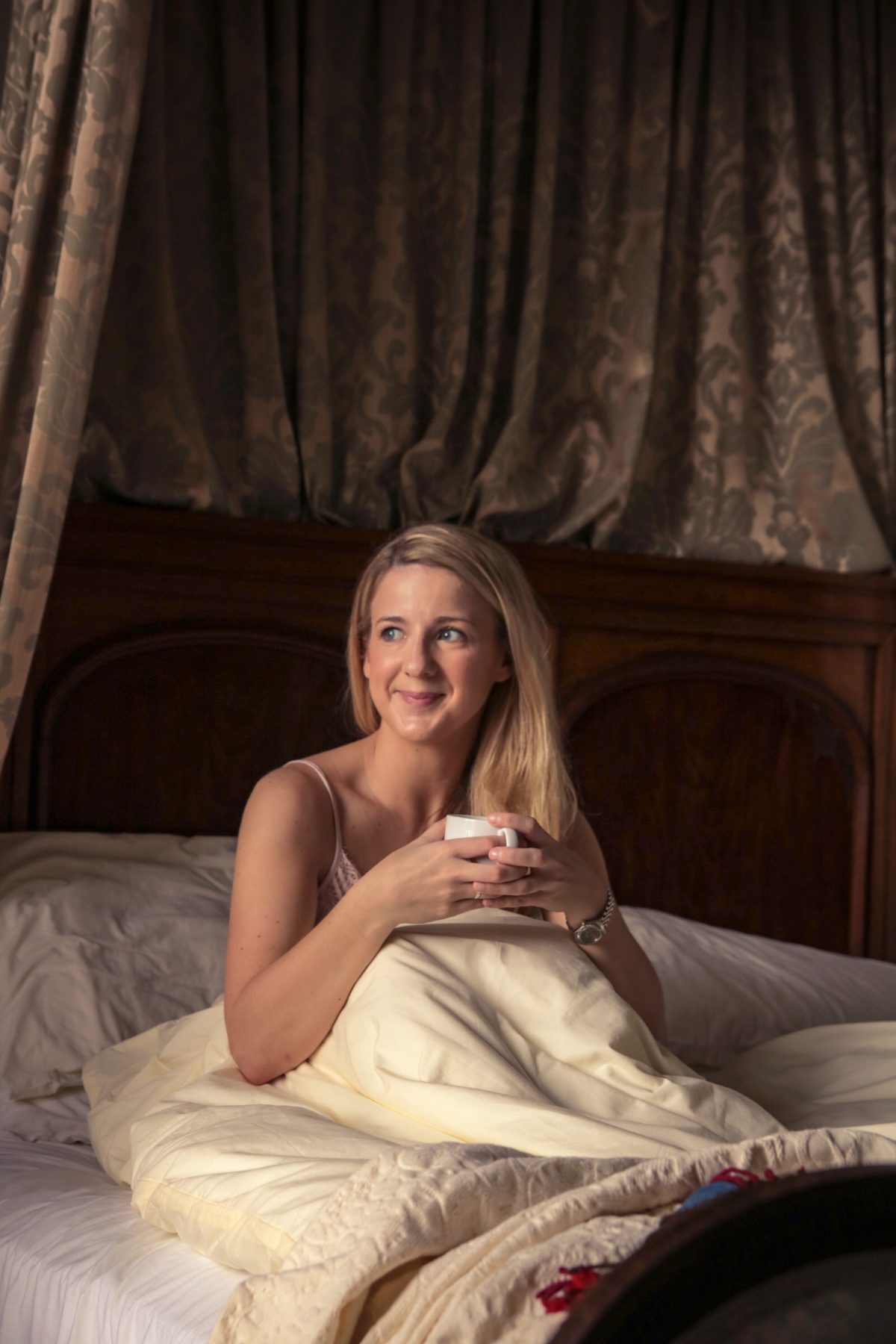 I would massively recommend using Rosleague as your Connemara base if you ever find yourself tempted by an escape to the wild Atlantic coastline. I can genuinely say that we'll definitely be back again and I can only hope that we have the sheer luck to have blue skies the next time too! I'll be posting more photos of our trip including all the secret and no-so-secret beaches we managed to squeeze in one day but for now enjoy some of our memories from Rosleague and the grounds we explored while we were there. 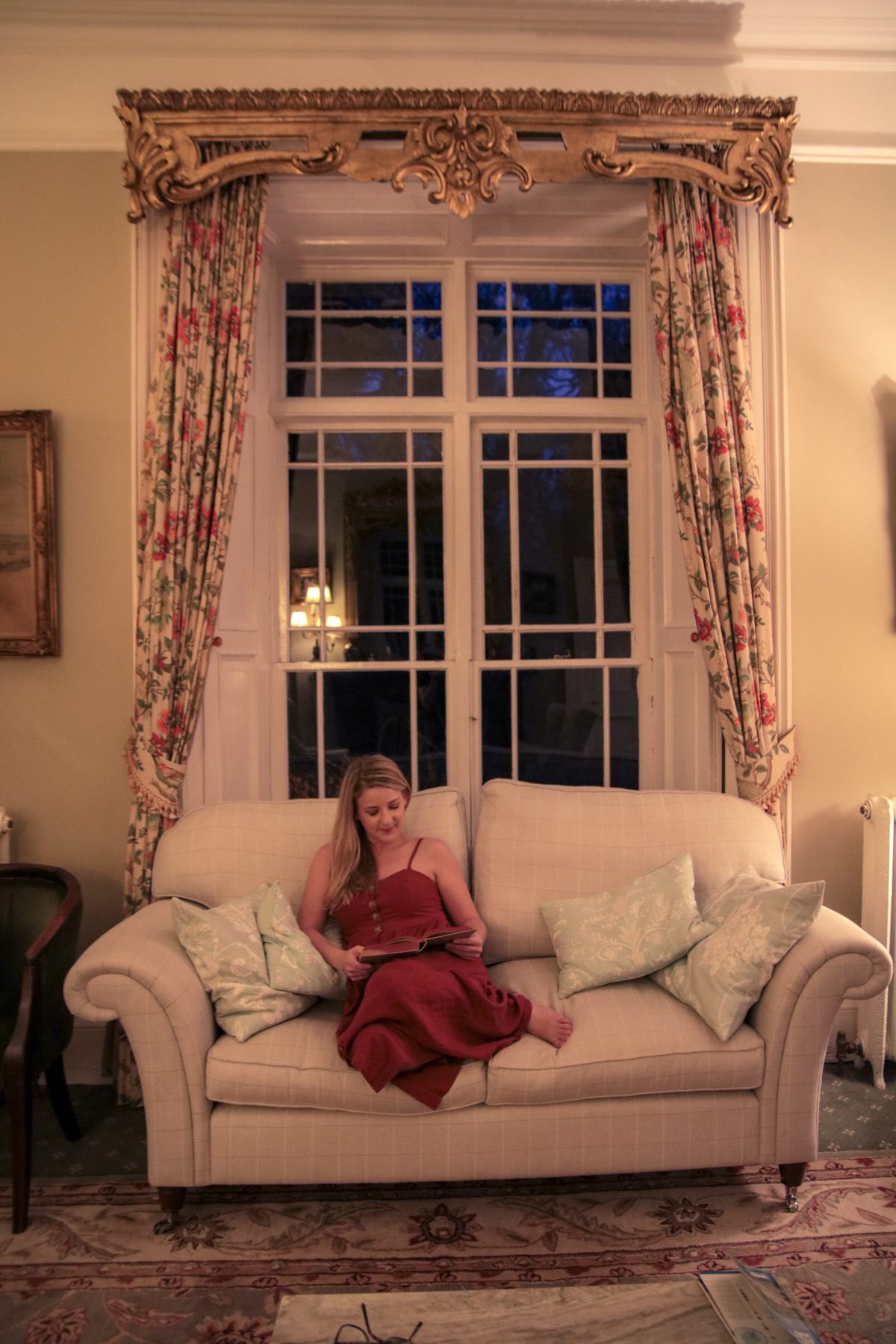