There are some moments in life when the littlest of things can seem so deliciously self-indulgent. Moments that feel almost laughable at how gorgeously simple they are. Drinking a cold glass of wine in a hot bath. Spending a long morning curled up in bed with breakfast and books. Sitting on the back step to soak in the last golden light of a blissful day. But do you know what I recently discovered to be the ultimate summer indulgence? A staycation at a luxury hotel a stone's throw from my house! 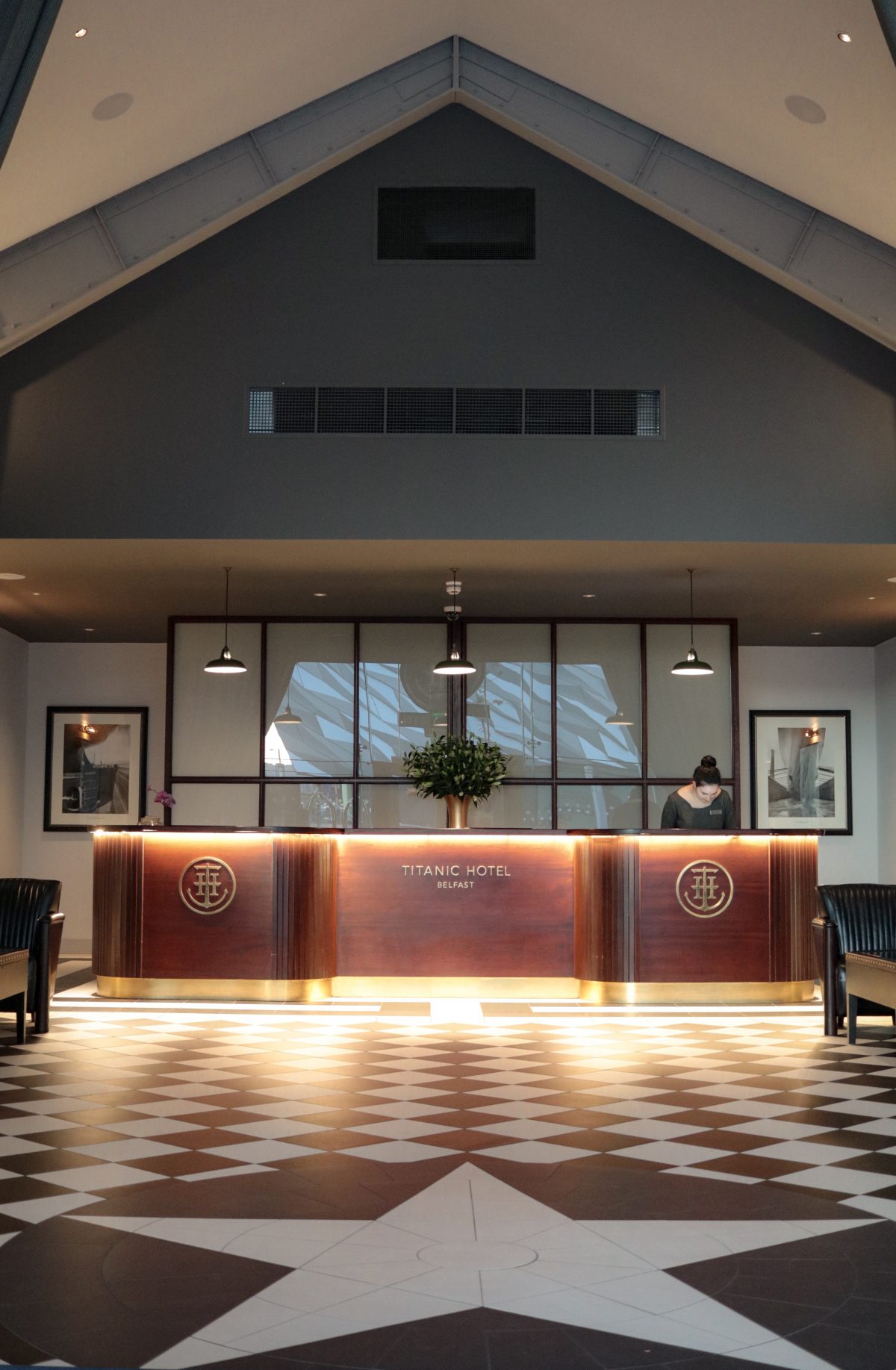 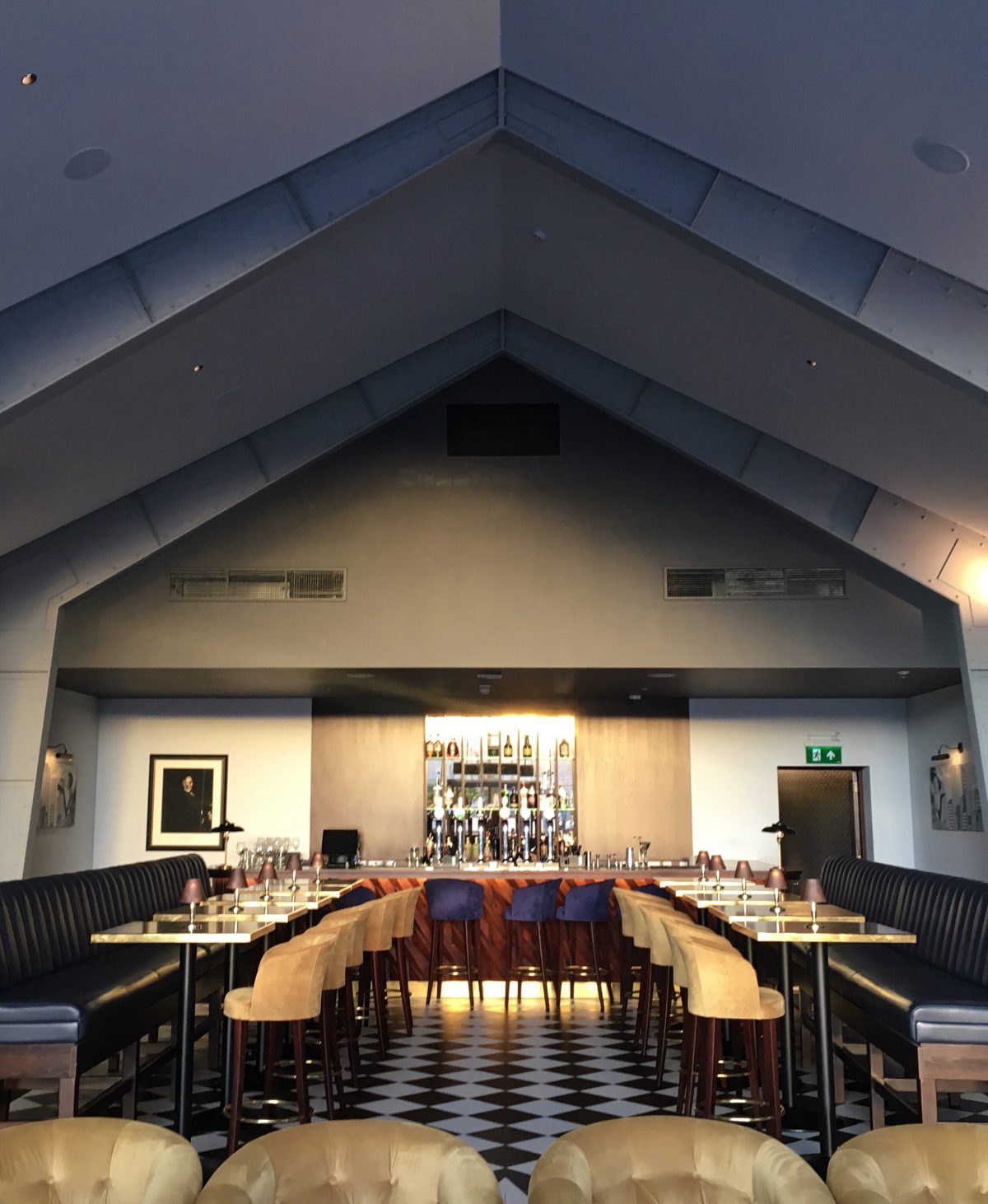 Titanic Hotel Belfast is really the dream hotel if you want to experience the old and new of Belfast. Despite only opening in September the hotel has helped transform the Titanic Quarter in to the tourist haven it is today and has encouraged a multitude of businesses to spring up around it. As a local I have witnessed the impact the hotel has had but would never have dreamed I could play tourist there so when the lovely folk from Titanic Hotel kindly invited me to experience my very own staycation you bet your Jack Dawson I jumped at the chance! 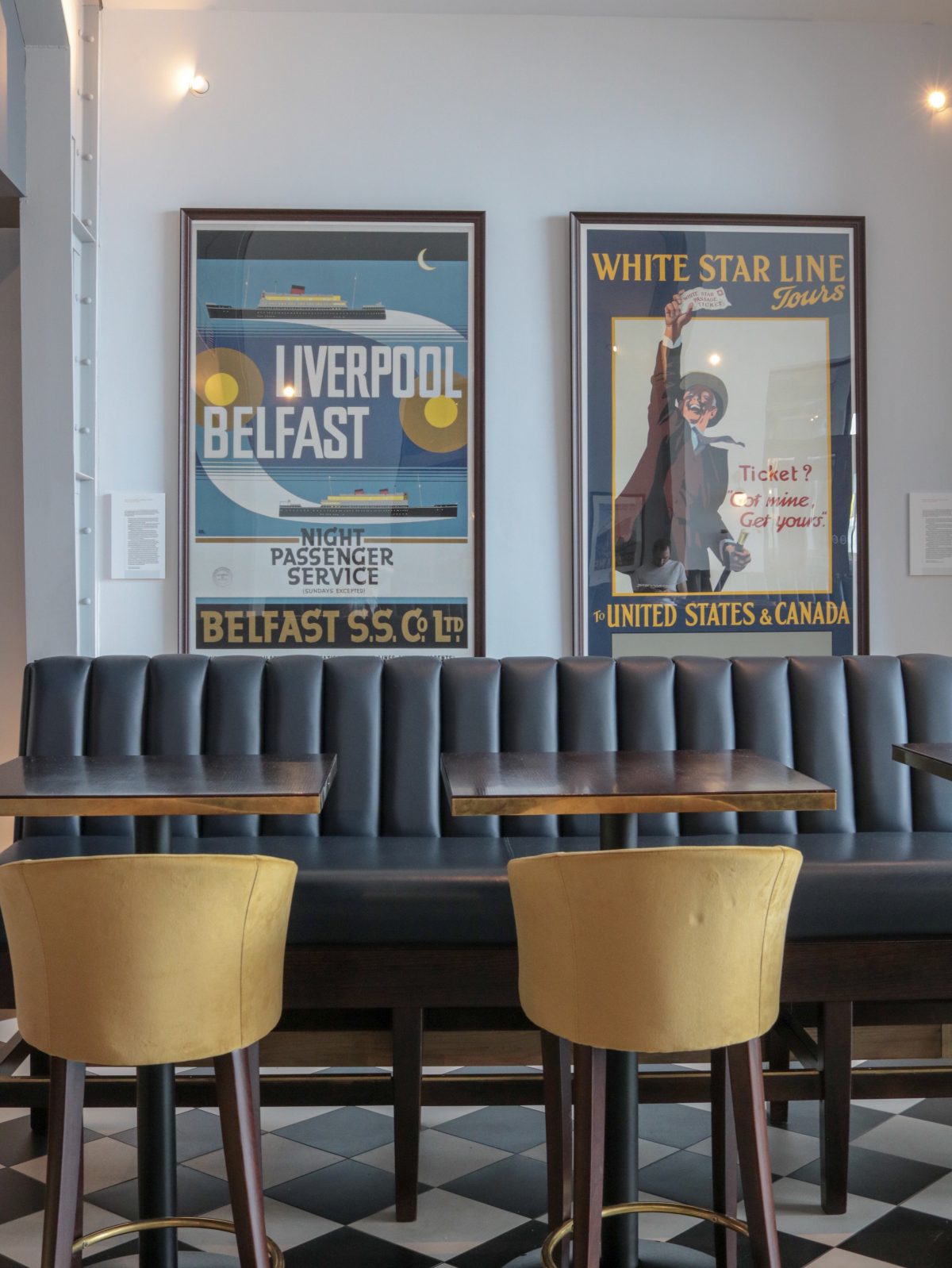 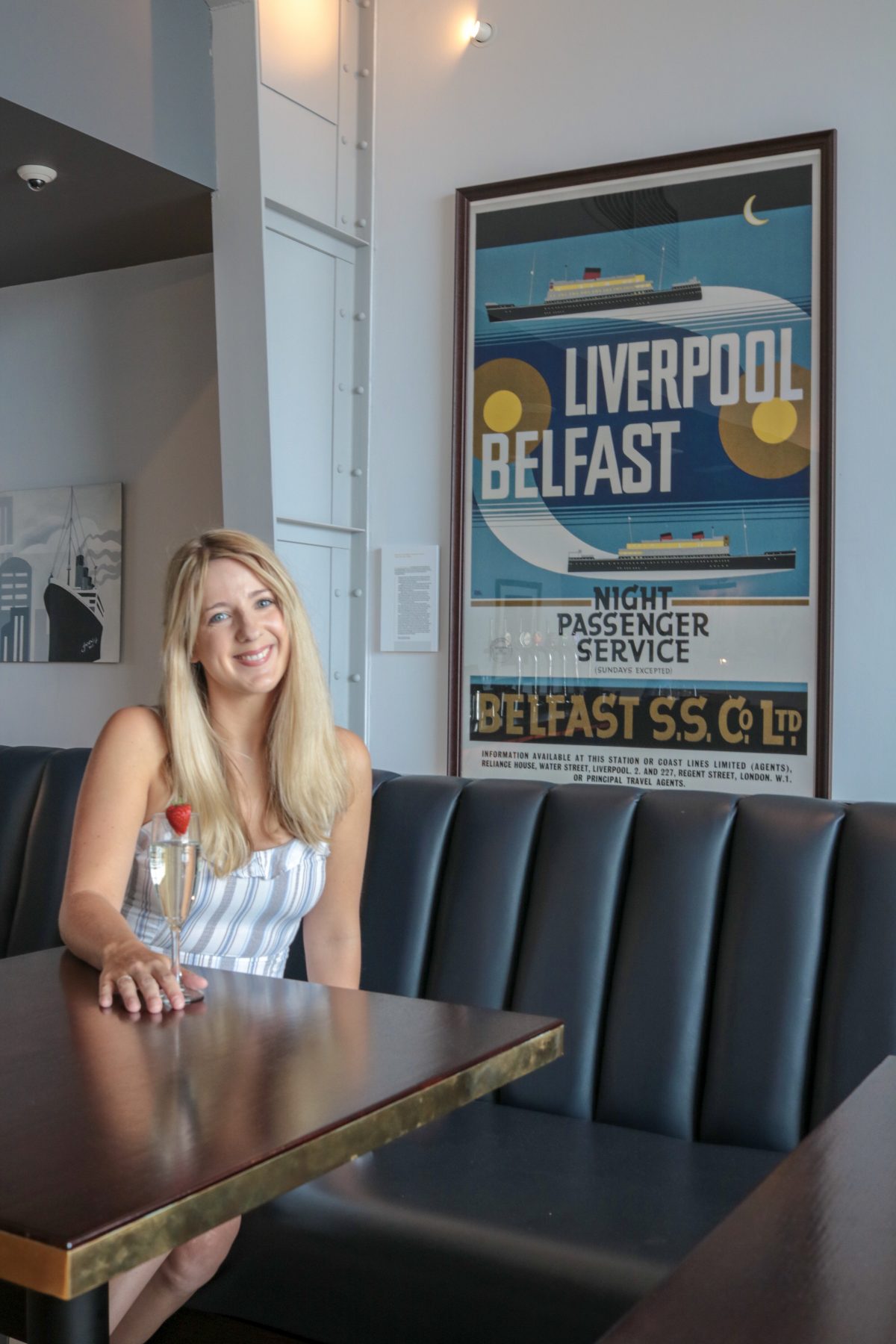 Driving the 0.8 miles from our wee house in Sydenham to the hotel was a strange journey since it's the route I take every day from work but as soon as I walked through the huge glass doors I instantly felt a million miles from home. The staff welcomed us both like we were newcomers to the city which was a real treat and made us both feel like we really were on holiday. What surprised us even more though was the level of detail in every inch of the building. Belfast's history poured out of every corner and it's charm out of each and every one of the staff we met. 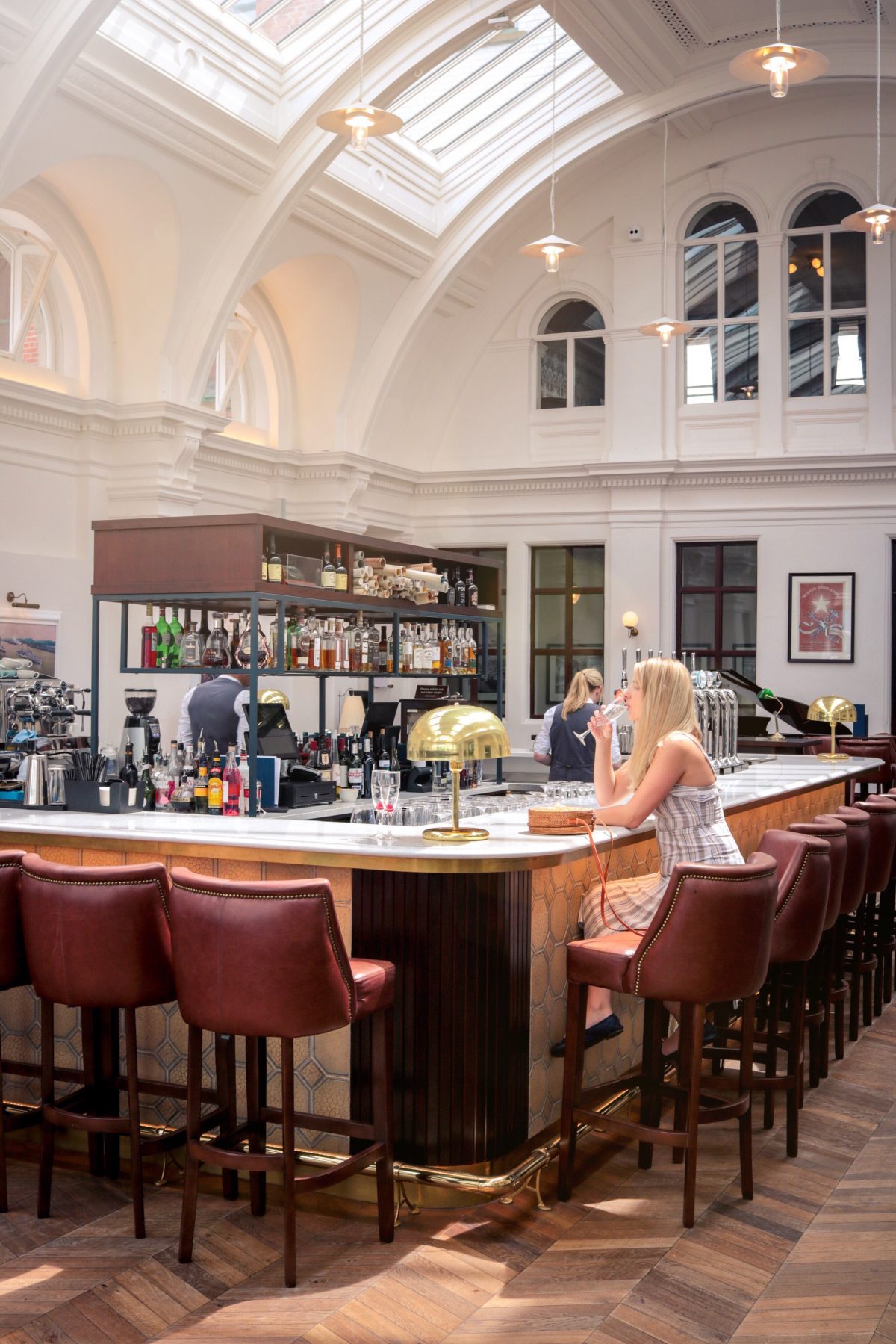 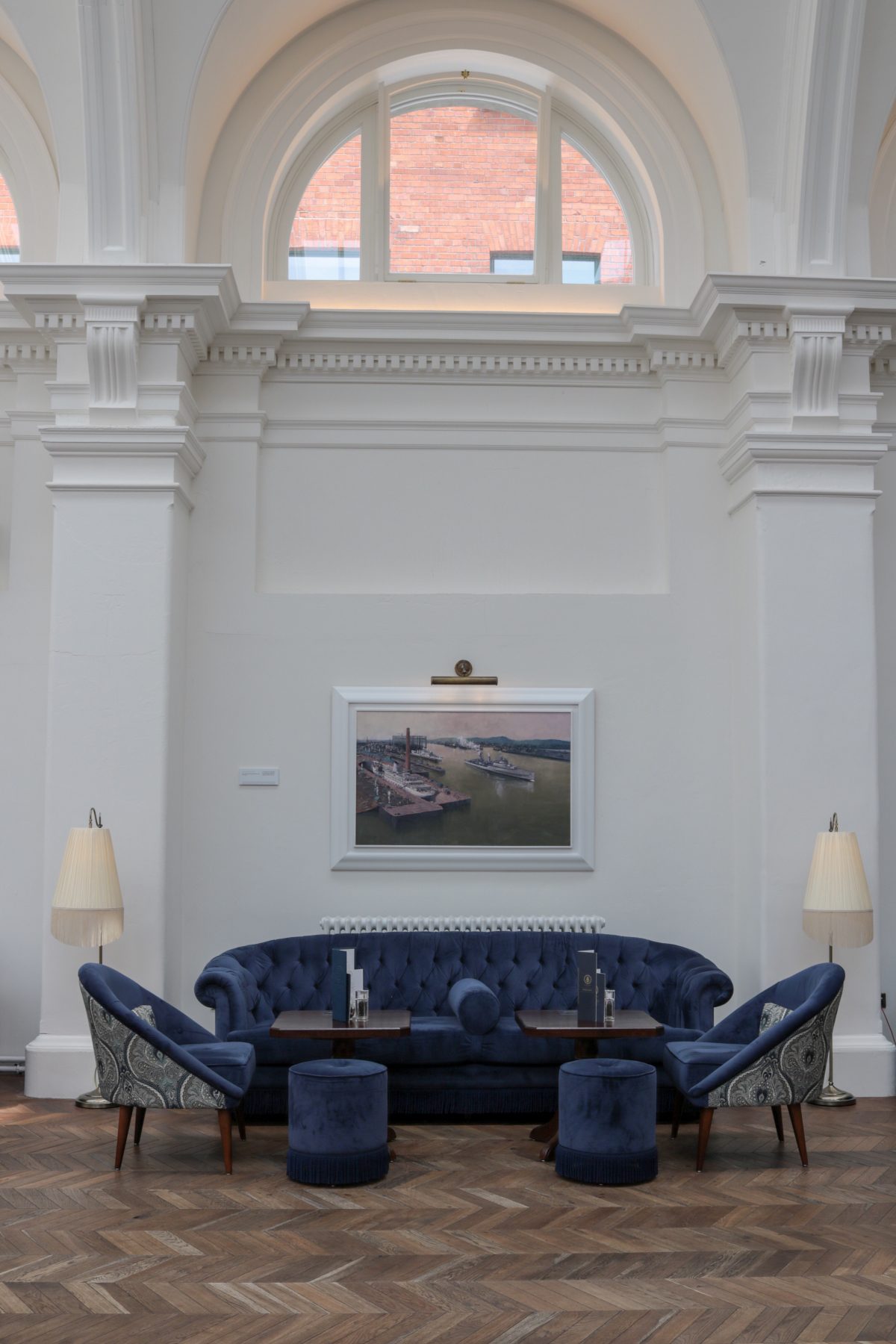 Authenticity has obviously been crucial in the success of the hotel. In a city that has received flack for milking it's Titanic connections, the Titanic Hotel has managed to strike a balance between celebrating the past and welcoming the future of Belfast. The building itself was once the bustling headquarters of Harland & Wolff, the shipbuilders who turned Belfast in to an economic empire in the early 20th century (and whose yellow cranes still form the city skyline today) and it's unique features have not only been conserved but celebrated throughout. 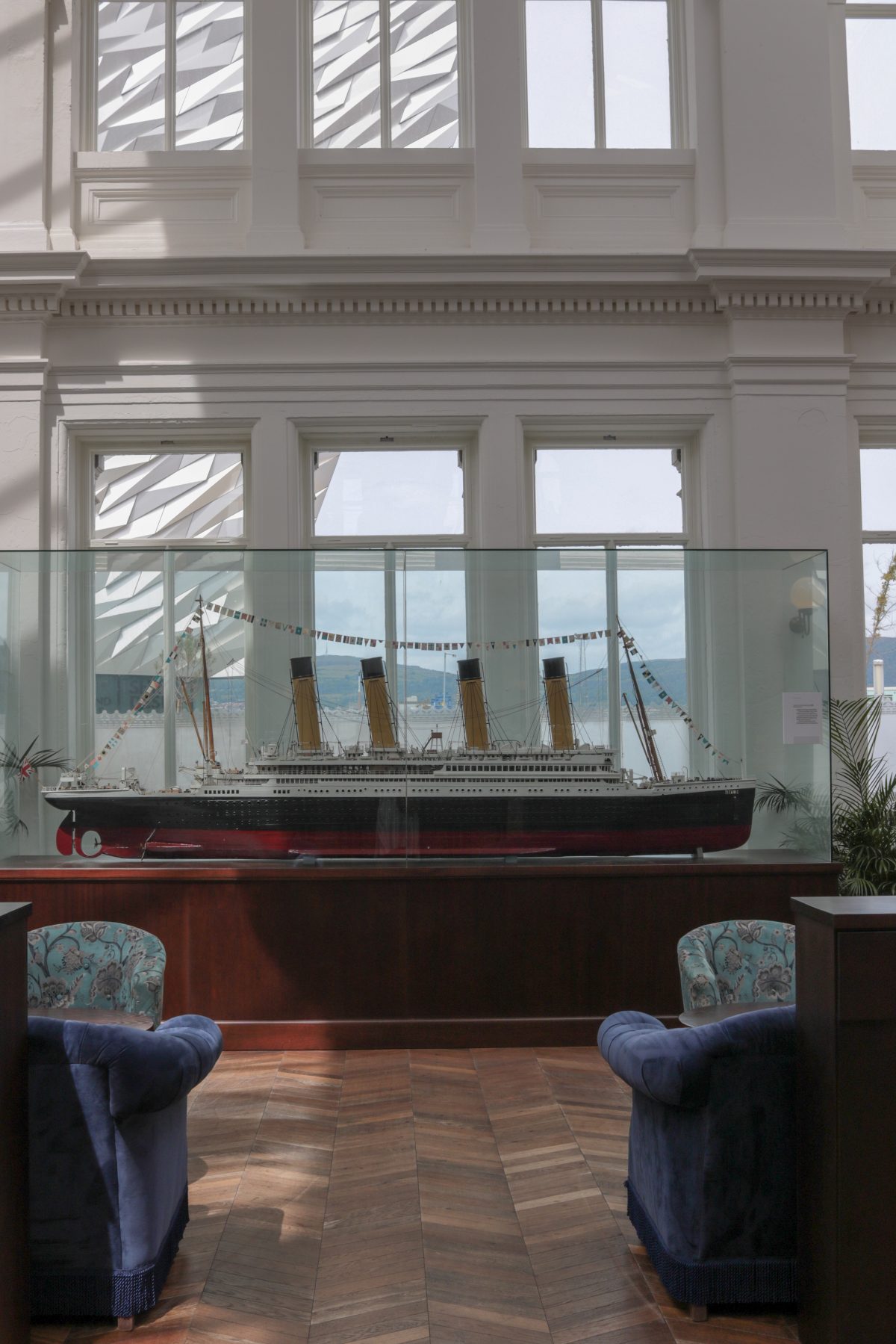 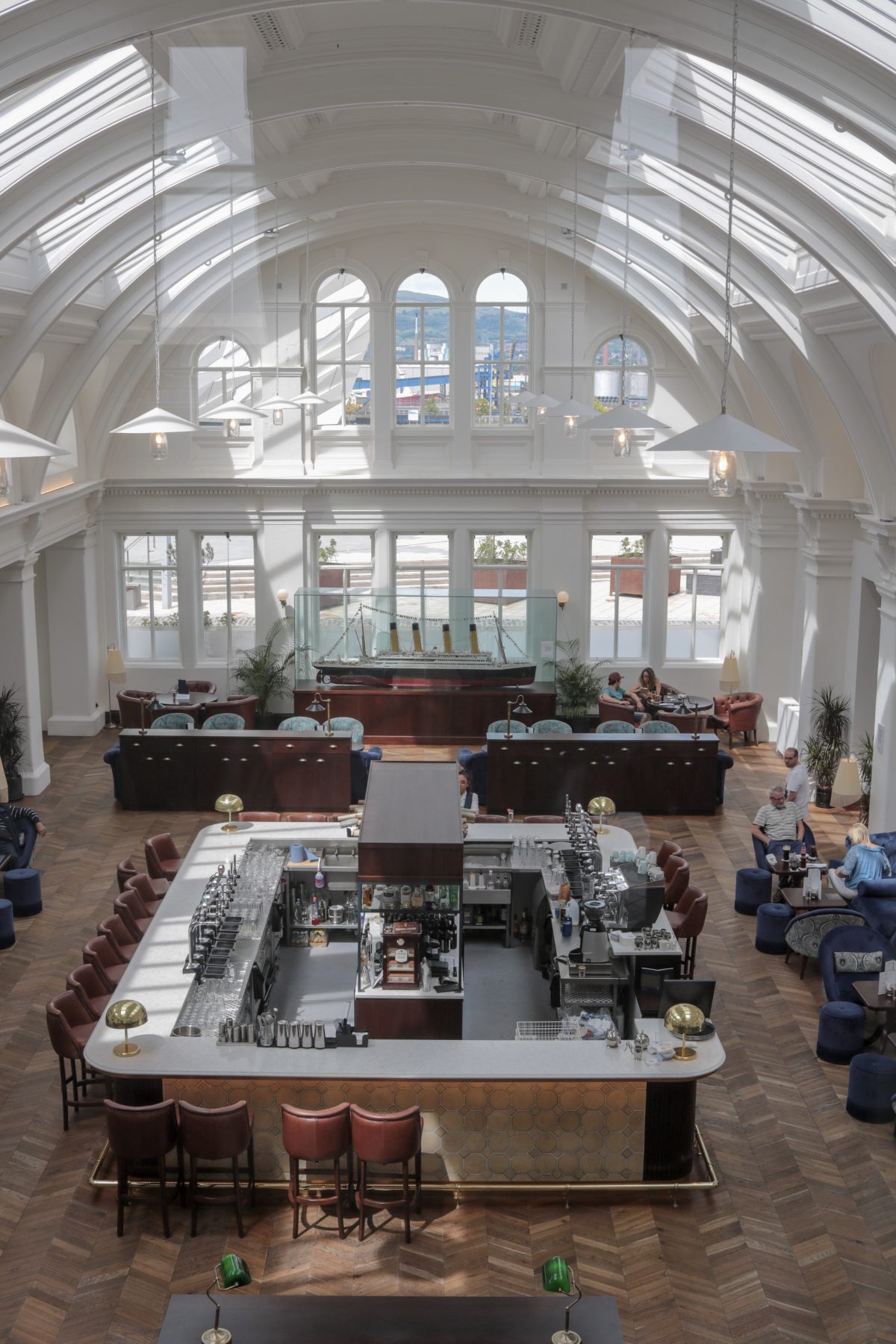 While the Titanic is the shipyard's most famous commodity, hundreds of ships were designed in the Drawing Offices of the building that now act as a function room and a bar in the hotel today. The Victorian barrel-vaulted ceilings have been preserved and updated with skylights allowing natural light to flood both rooms making them an absolute dream to photograph (while drinking cocktails of course). In fact, the tiles that decorate the front of the bar are the same tiles that were used in the Turkish baths of the Titanic (and were found in dusty boxes while the building lay derelict!). 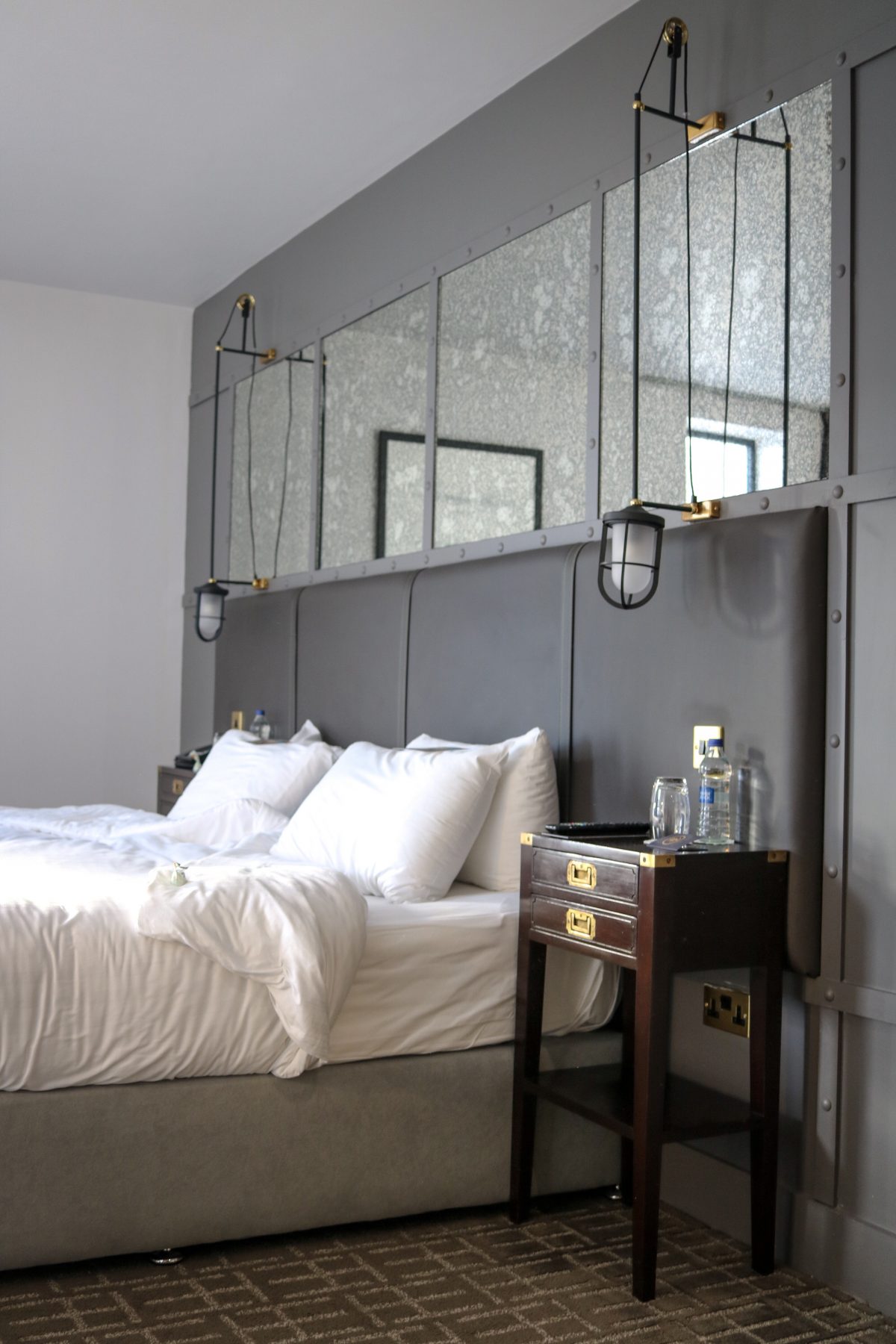 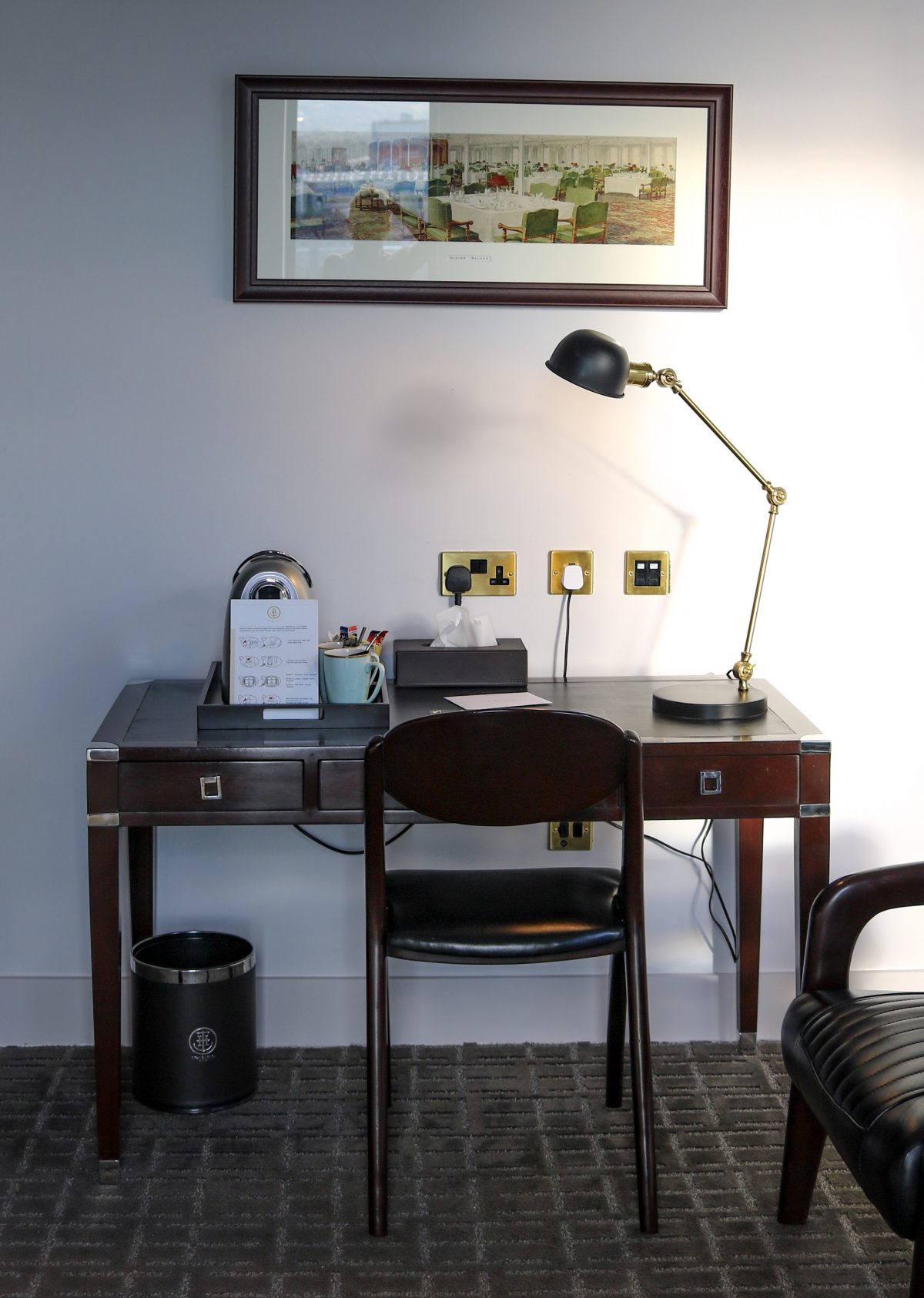 After checking in we were shown to our room by Paddy, a bell-boy who knew more about the building's history than most tour guides. He was even generous enough to give us a quick tour of rooms that hosted key moments in the past before he clocked off; the Presentation Room where plans were dissected and bought (and where you can enjoy Afternoon Tea today), the old telephone exchange which acted as the communications hub for the shipping offices (and where the first call announcing the sinking of the Titanic was received) and the original staircase decorated with the flax flower to commemorate Belfast's textile industry. 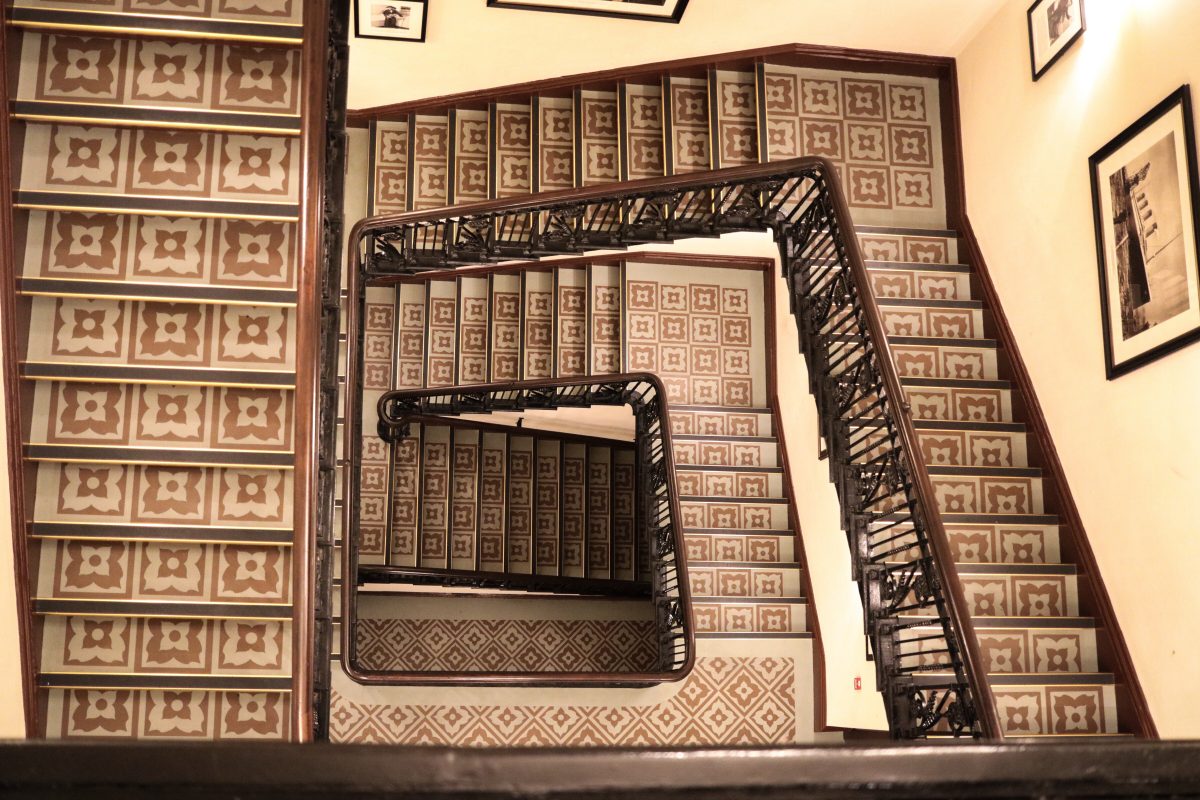 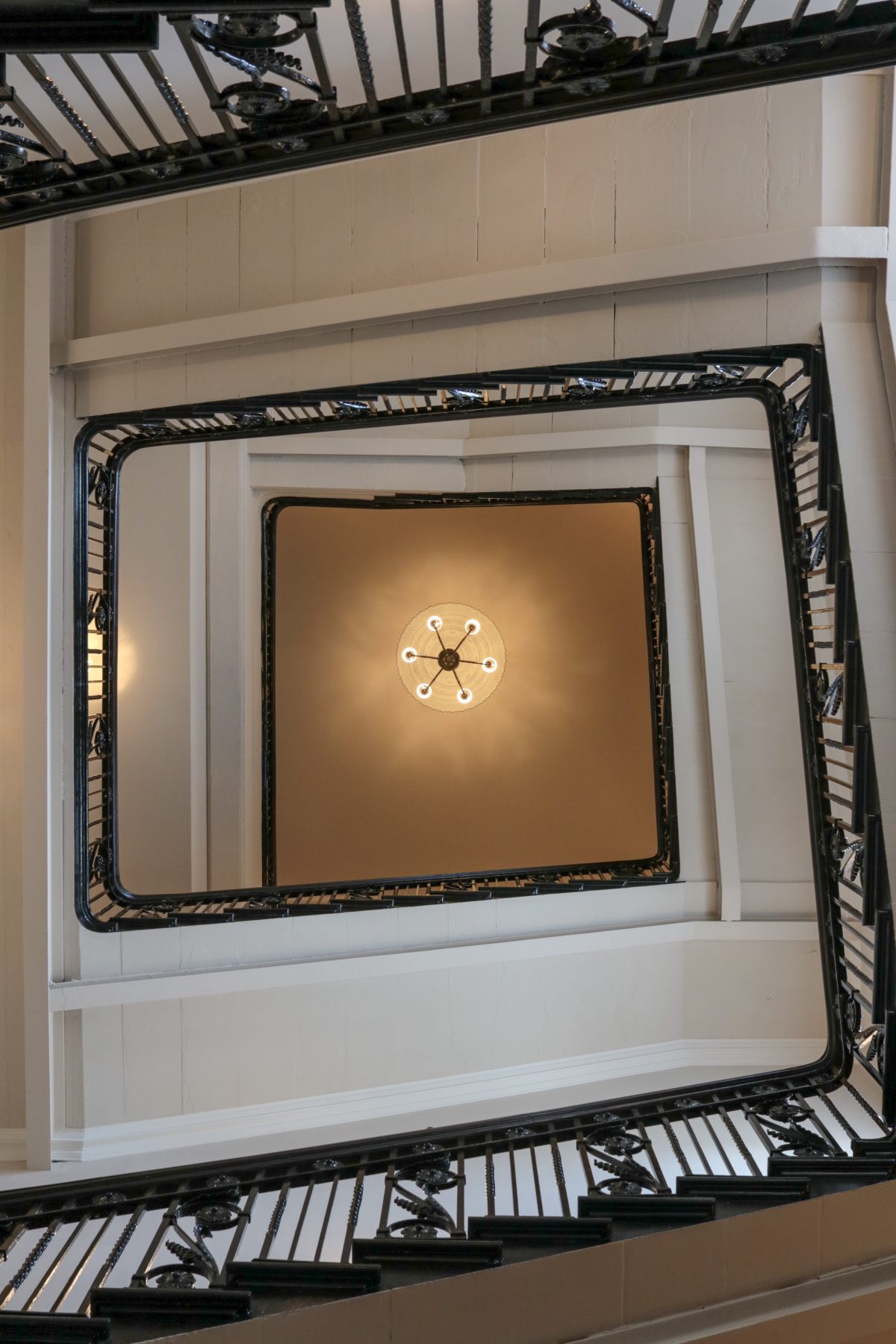 While artefacts and paintings line the corridors of the main building, upstairs the design cleverly shifts. The halls are long and dark and the doors to each room are bolted like that of a ship. Inside the room the style is very much art deco but with subtle nautical accents that doesn't feel too try-hard. We were lucky enough to stay in room 401, a spacious suite looking out to the sharp lines of the Titanic Museum (named the top tourist destination in Europe in 2016) as well as the shipping channel and Belfast hills. 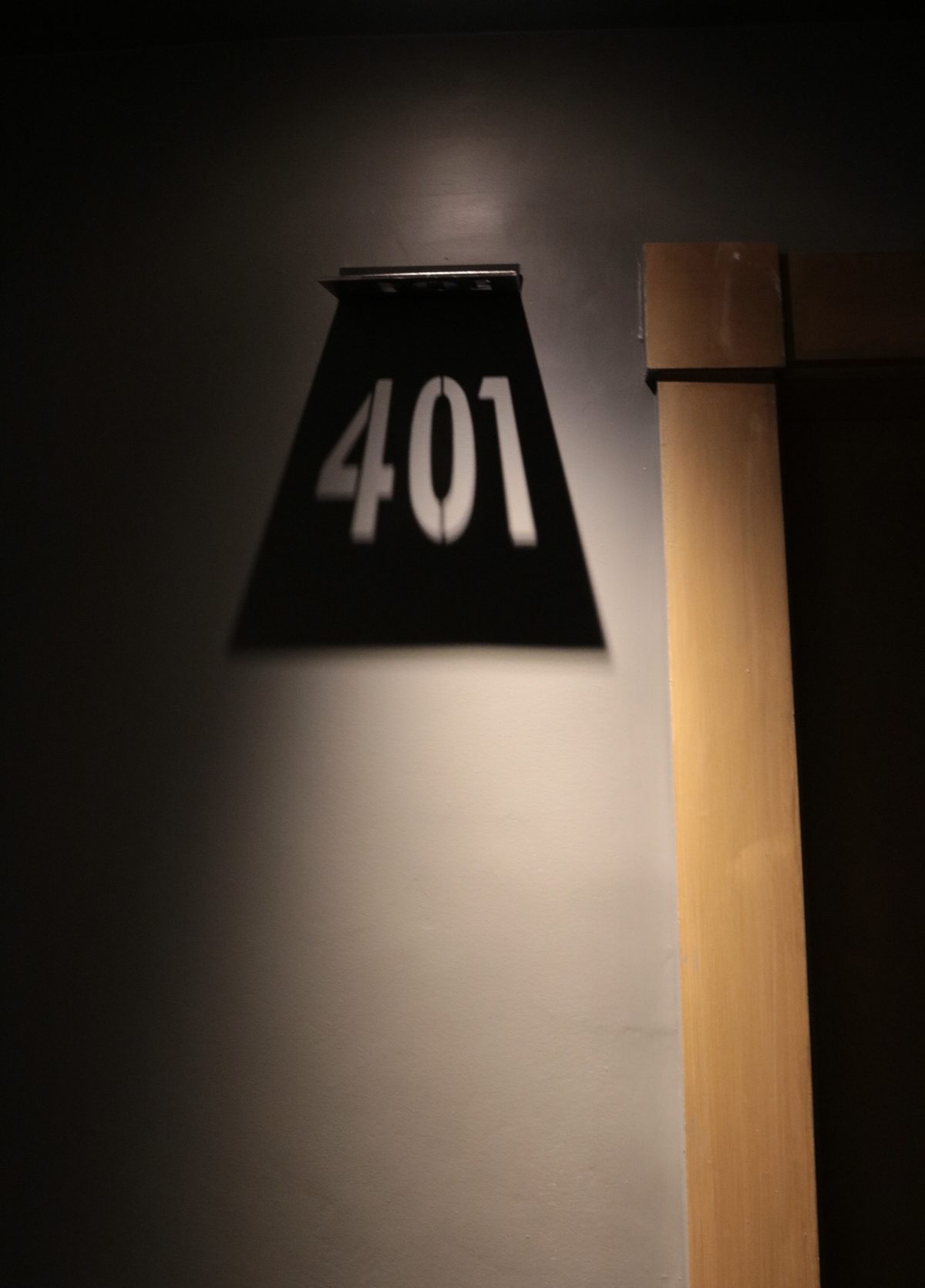 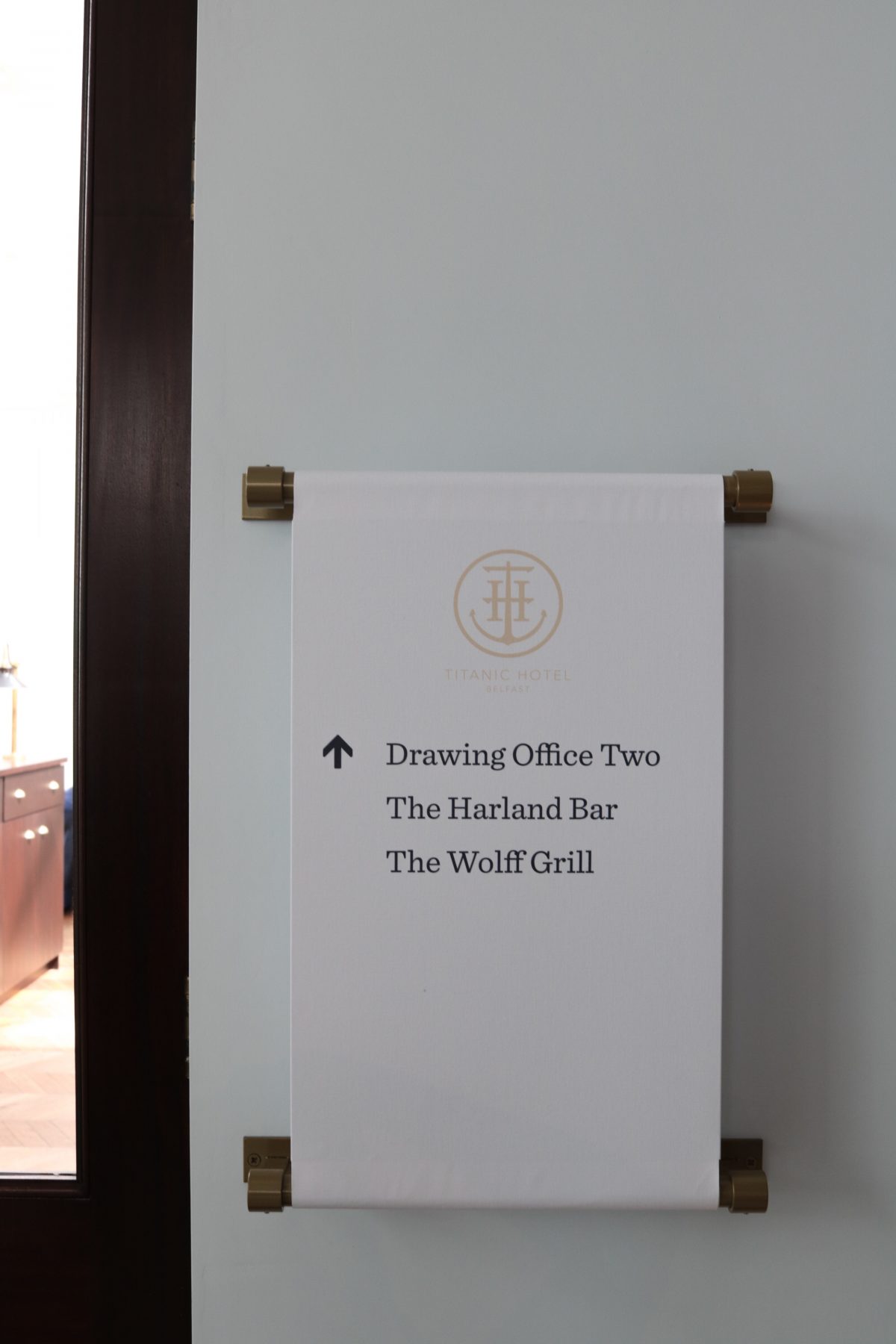 It was tempting to cosy up here for the night and watch the sun set over the mountains but our bellies were rumbling and the Wolff Grill was calling. The fine dining restaurant of the hotel is another interior design feast for the eyes and was drenched in the evening light as we were shown to our table. The menu boasts local ingredients that were kindly explained by Norbert our waiter, an absolute gem of a man who had both of us laughing and grinning all night. I started off with cod & caviar (if you don't mind) while Andrew went for arancini balls; both very delicious and both wolfed down faster than I'd like to admit. We both went for beef for main (we were on our holidays after all), a decision neither of us regretted. Full to the gills we decided to share dessert, a white chocolate pot with homemade peanut butter fudge which we almost licked off to finish but decided not to for fear of judgement from Norbert (although I'm sure he would have loved that). 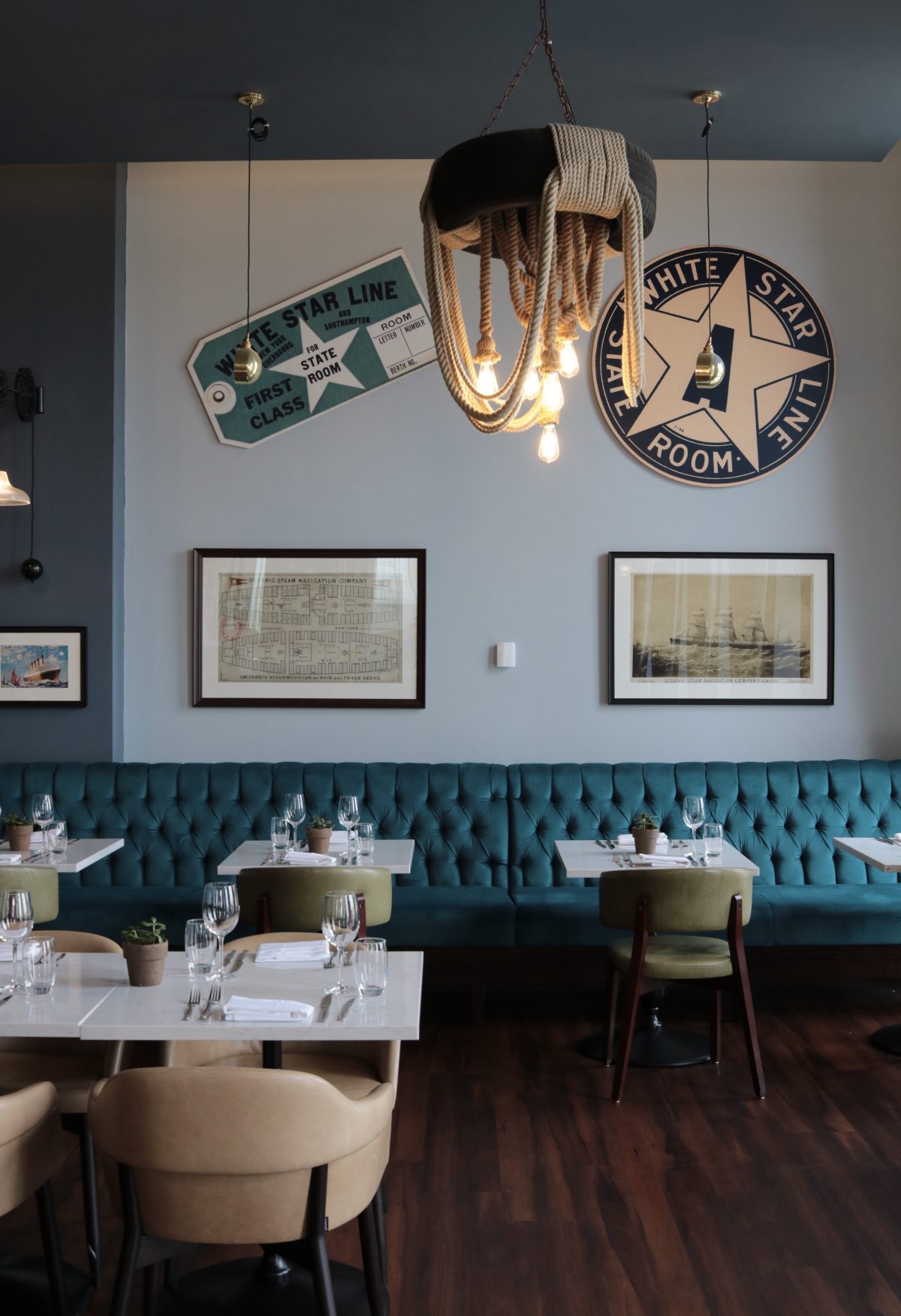 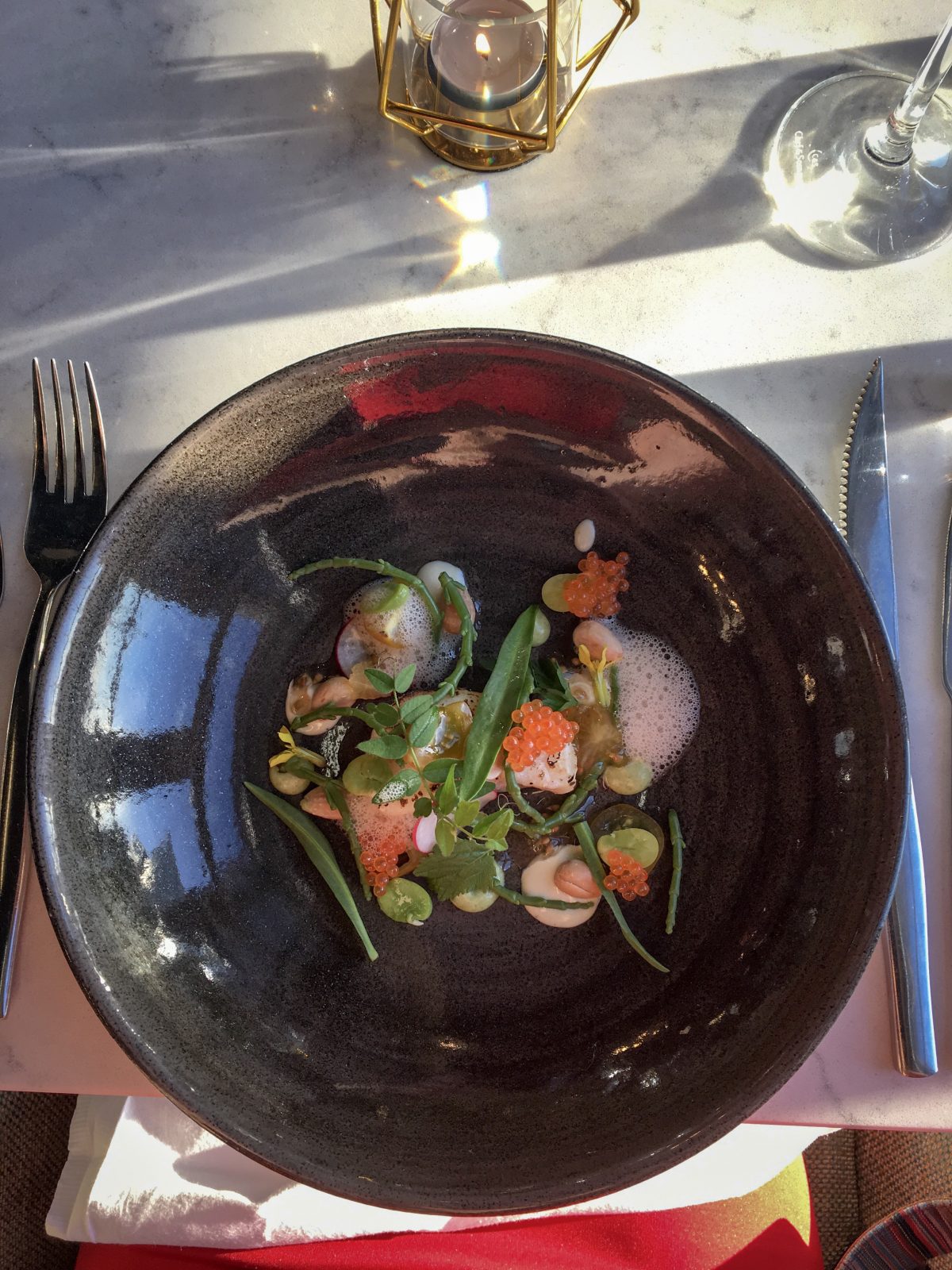 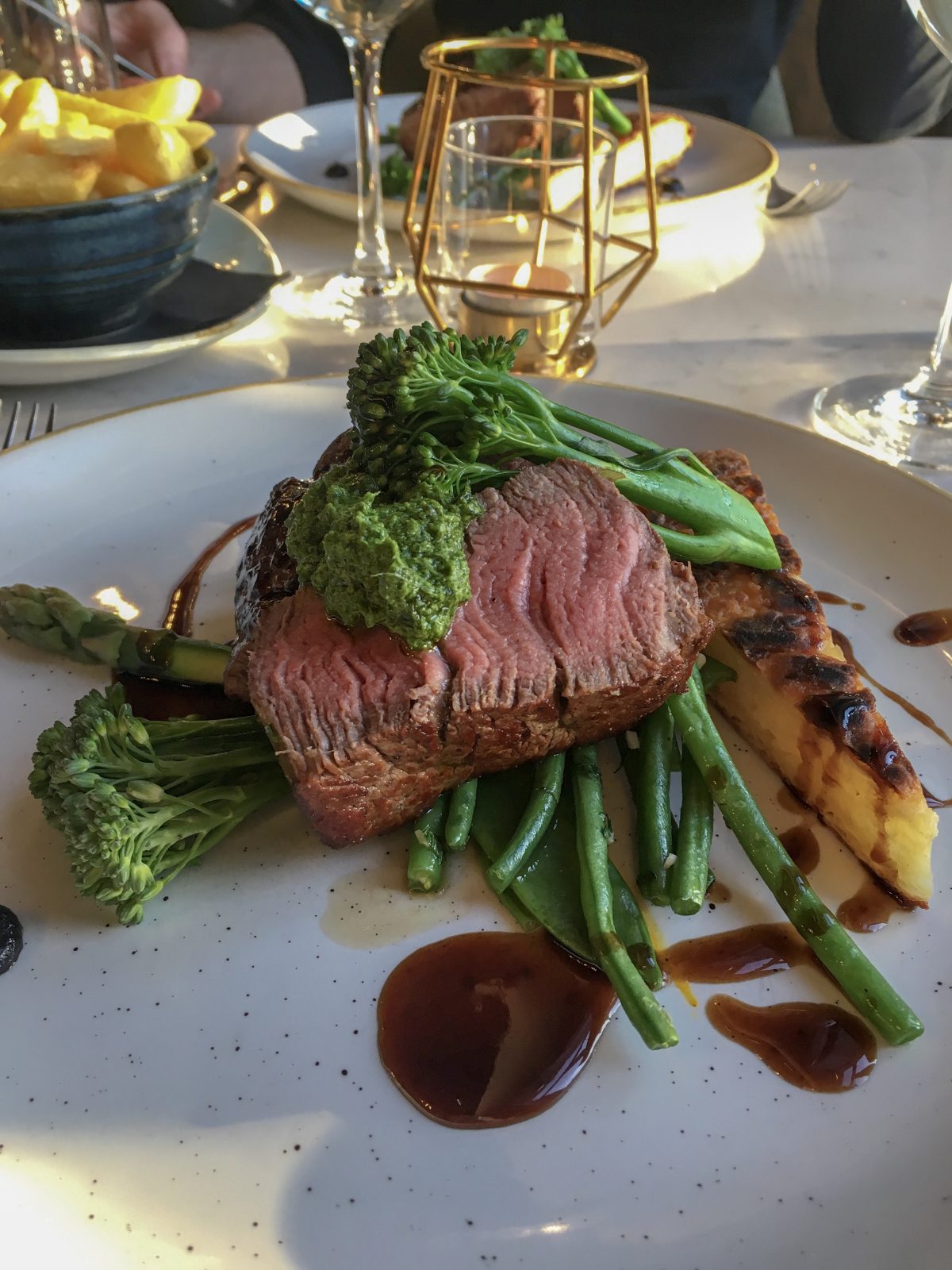 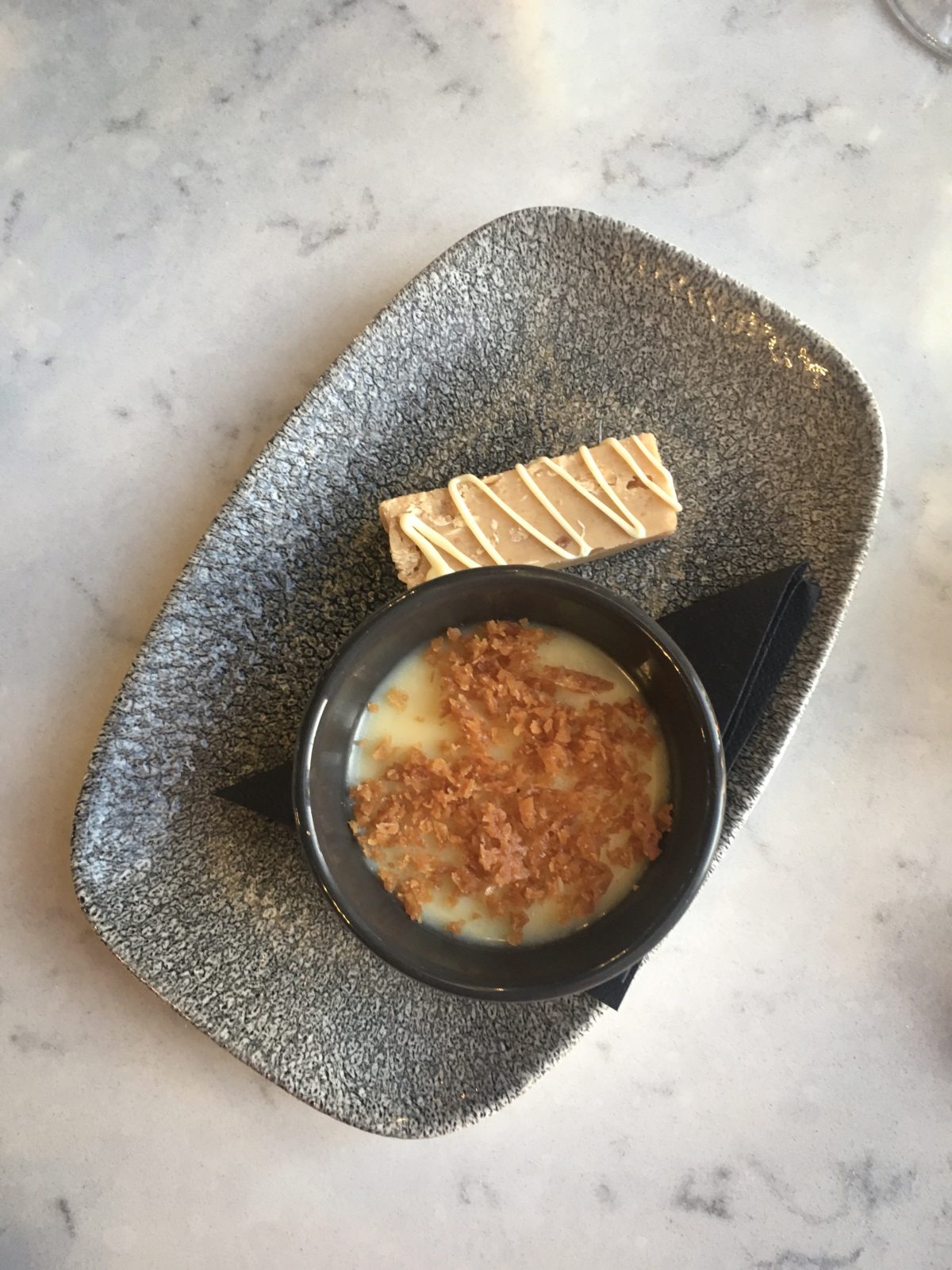 After dinner we waddled out to the slipway for a dander and to watch the sun set. I had worn my fancy dress and thanked the heavens I wore Spanx even though I could barely breathe and needed to sit down after a few steps. Once the sun had gone down we found ourselves at the bar with the speciality cocktail list in our hands. The bartenders clearly liked to experiment and encouraged us to let them make us something off the menu (although the Jack & Rose did sound delicious). We were treated to the tastiest drinks (Andrew particularly loved is strawberry-decorated delight) and parked ourselves there for an hour or two chatting with other guests until even the Spanx couldn't contain me. 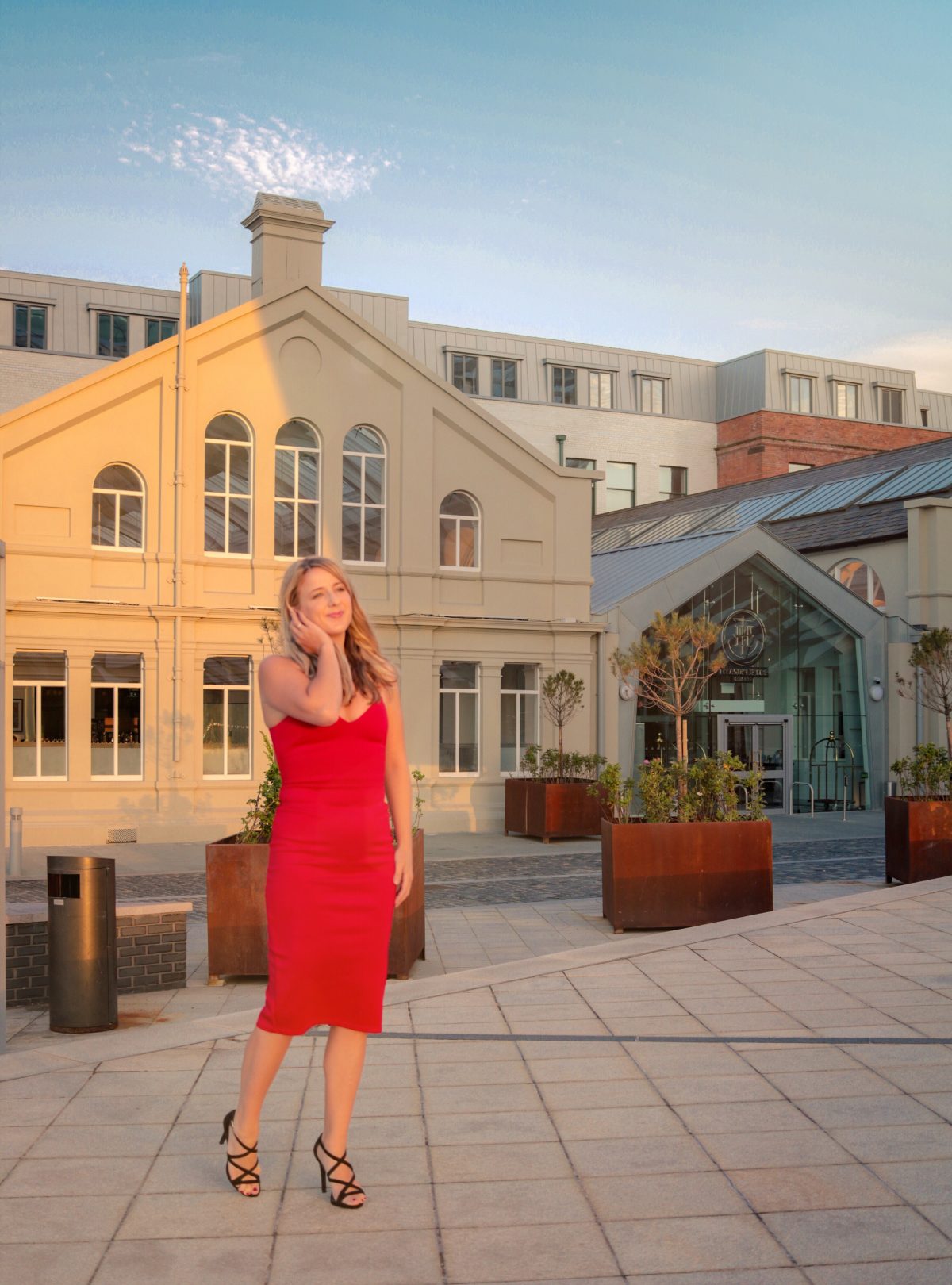 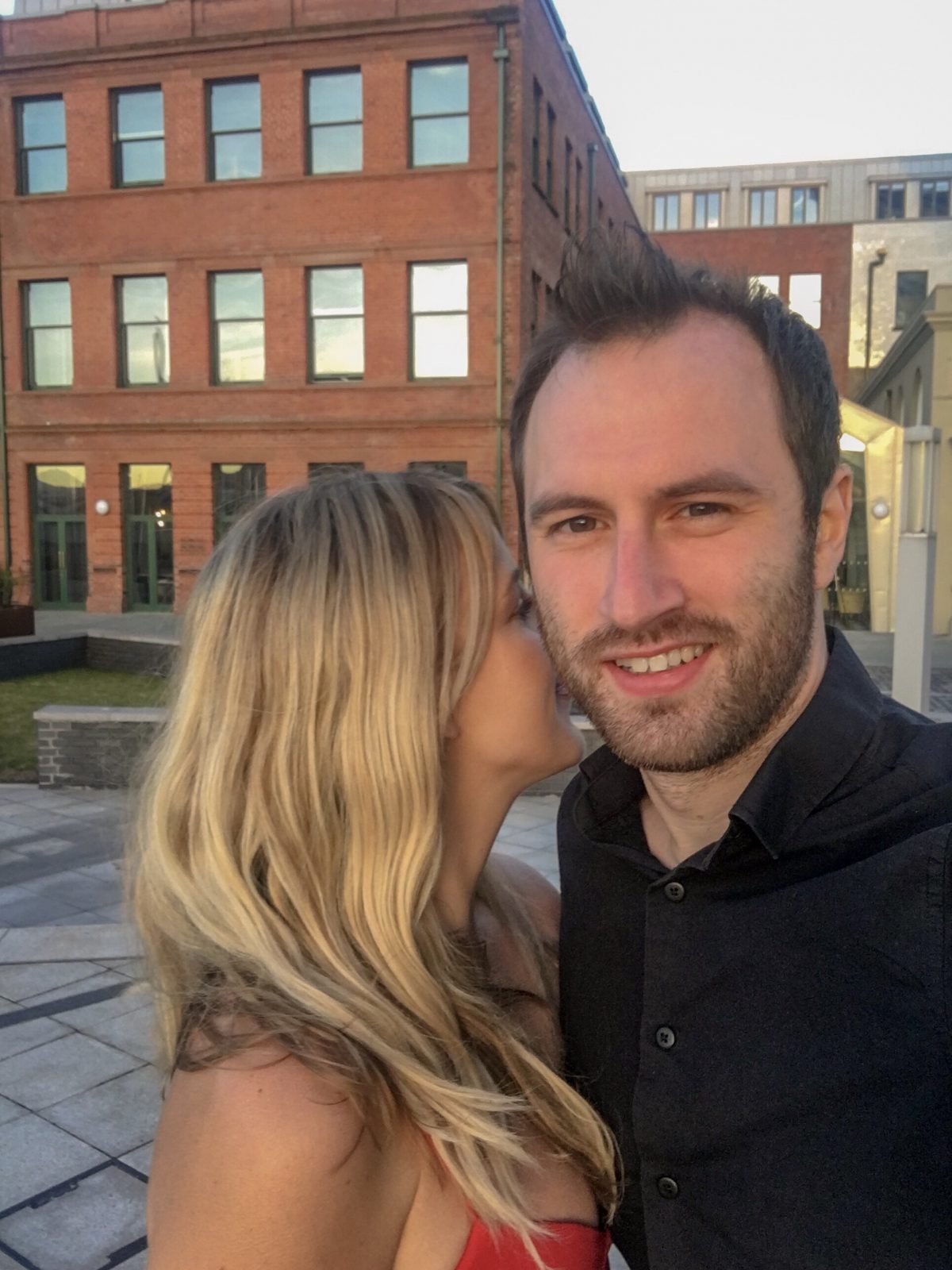 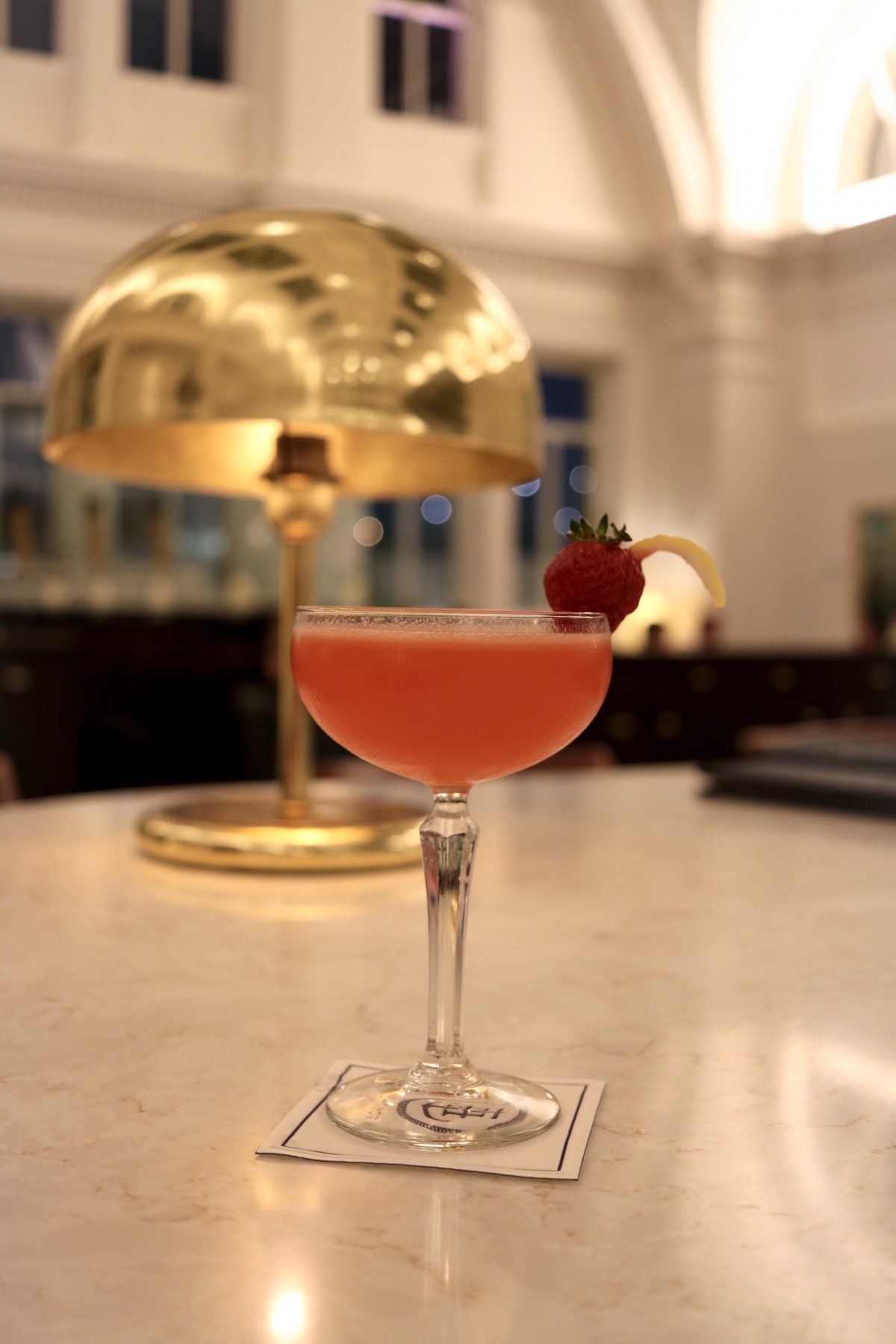 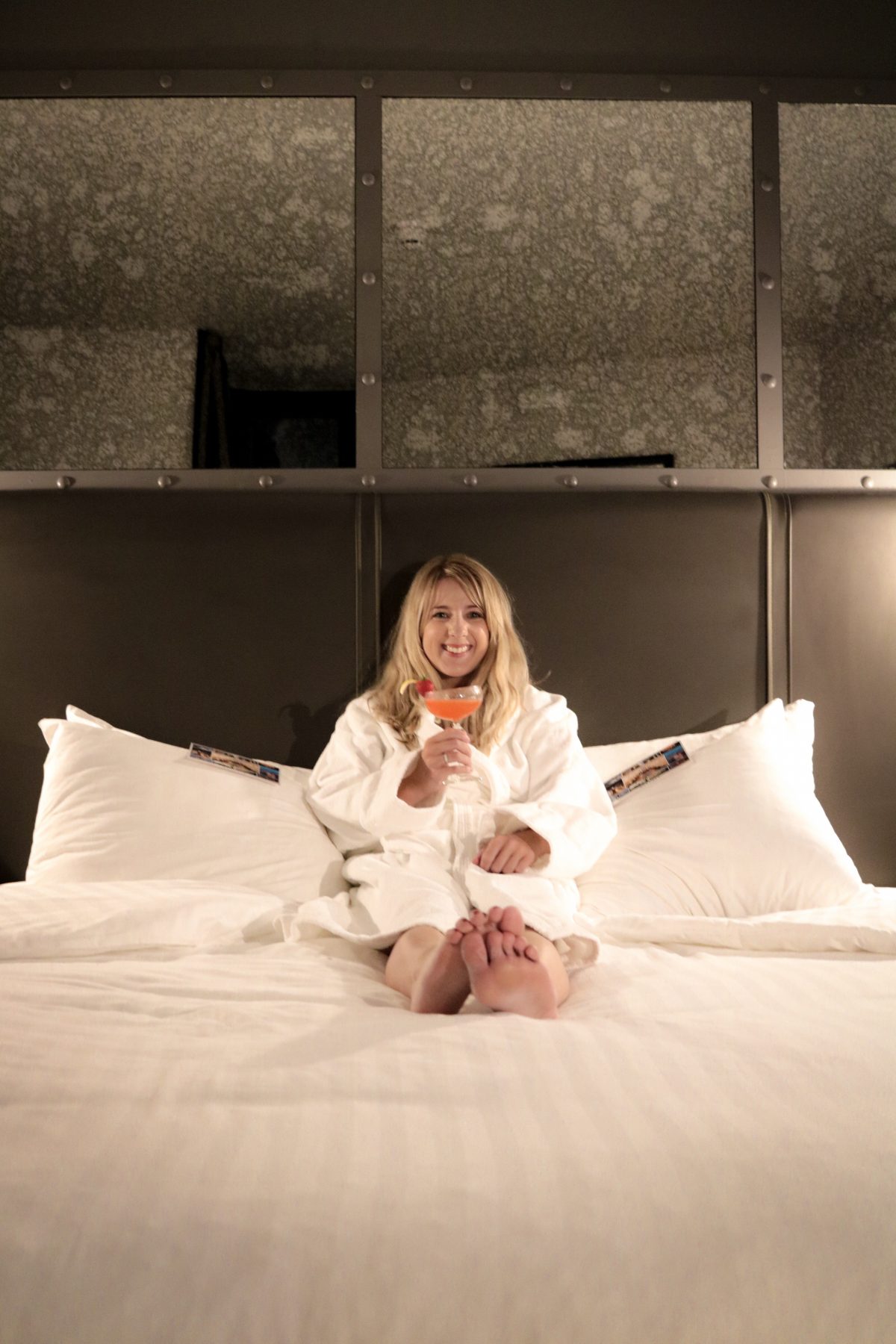 The next morning we felt refreshed taking our time to enjoy the room while we still had it. The bath was a particular treat for me since my own resembles something your Granny would have sported in the 1980's (lemon, it's lemon - damn rental). We pottered down to the Wolff Grill again for a huge buffet breakfast; an impressive selection that I got shamefully excited about. Looking out over the slipway we felt relaxed and almost forgot how close our journey home was. 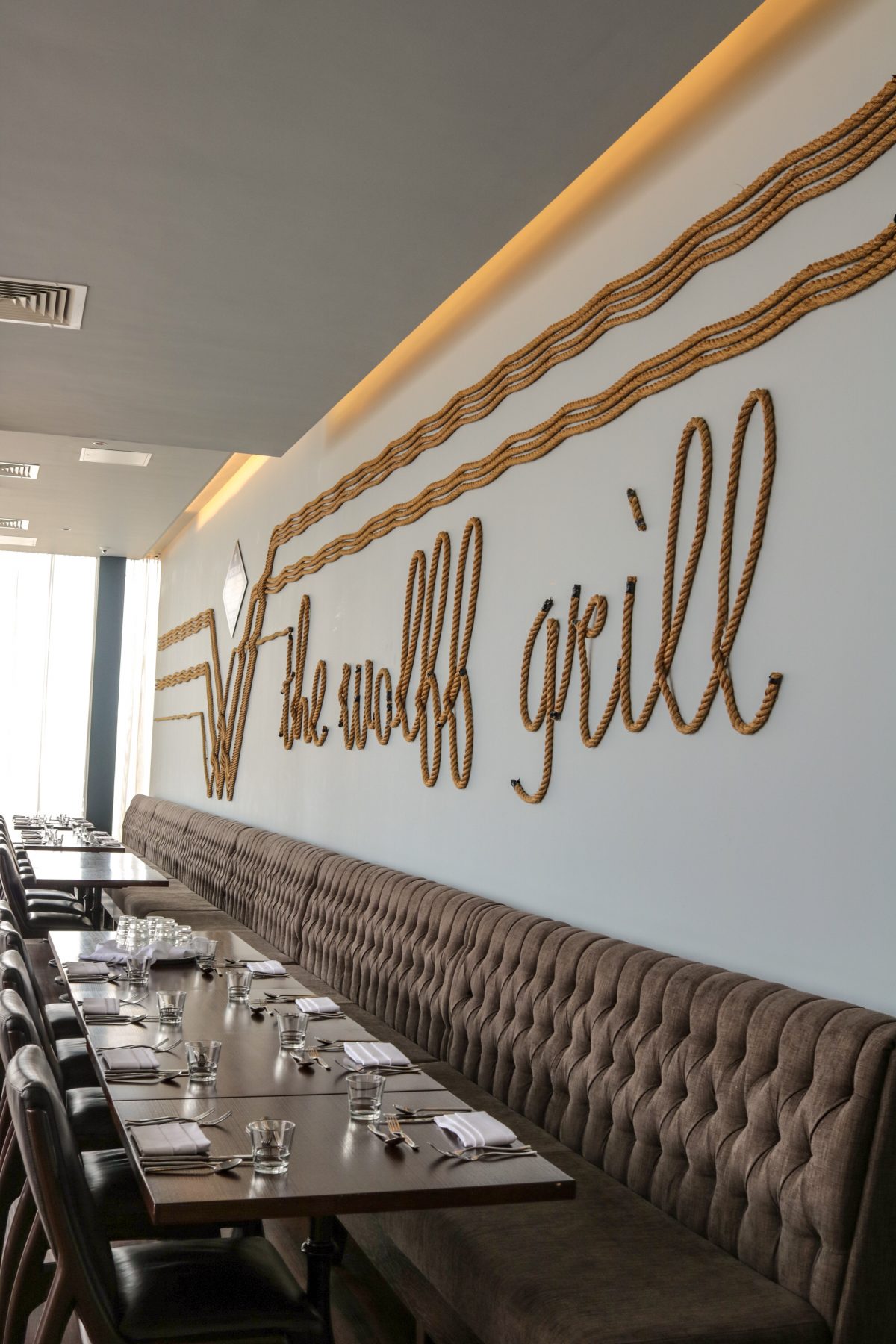 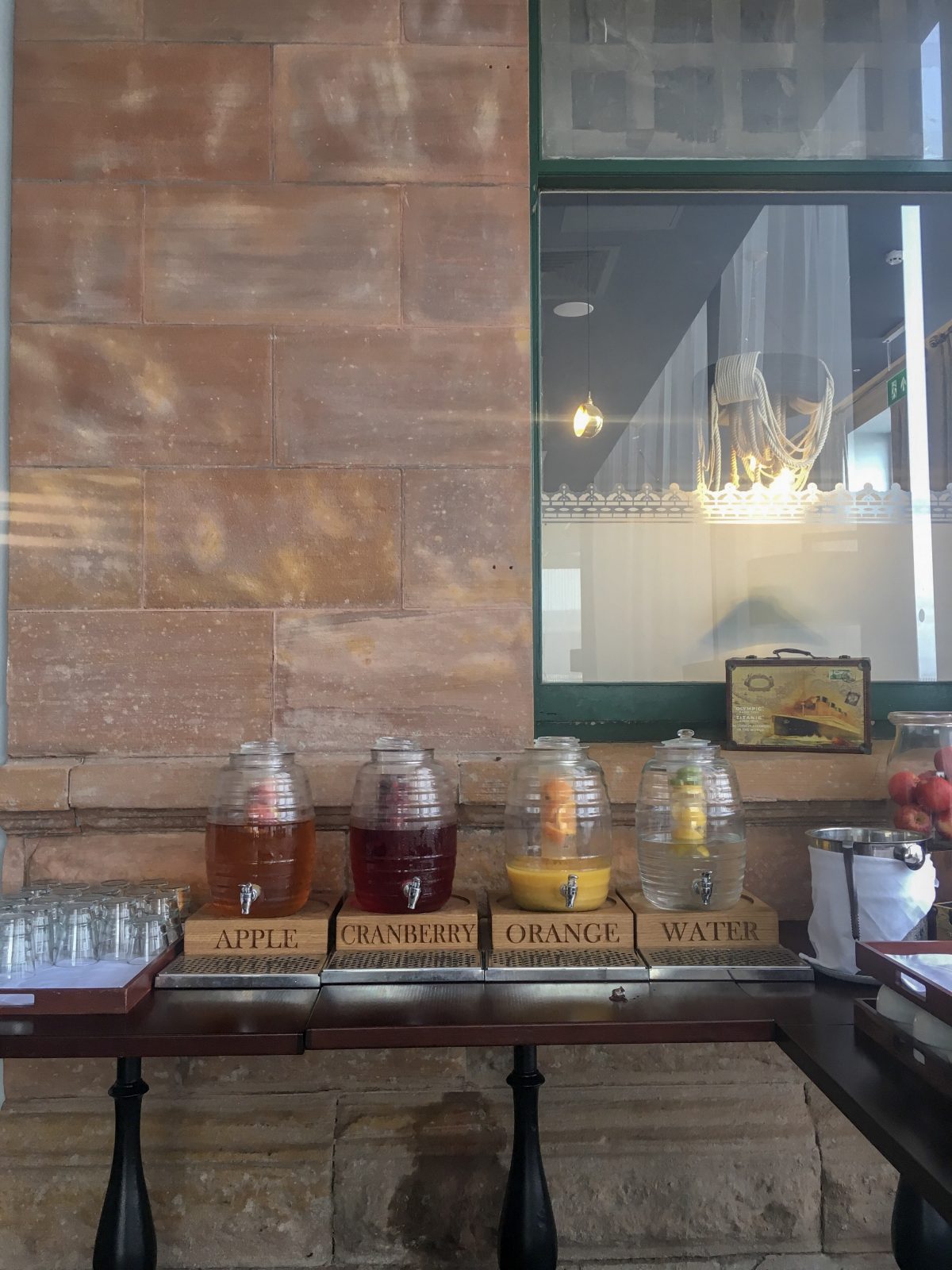 We took another walk round the building before we left not wanting to cut the trip short just yet. I found myself thinking about all the memories that the marble walls held and how much this city has changed since then. These stories would have been lost if the building hadn't been preserved so thoughtfully and as a local this was something I felt very proud of and wouldn't have experienced if I hadn't have stayed there. 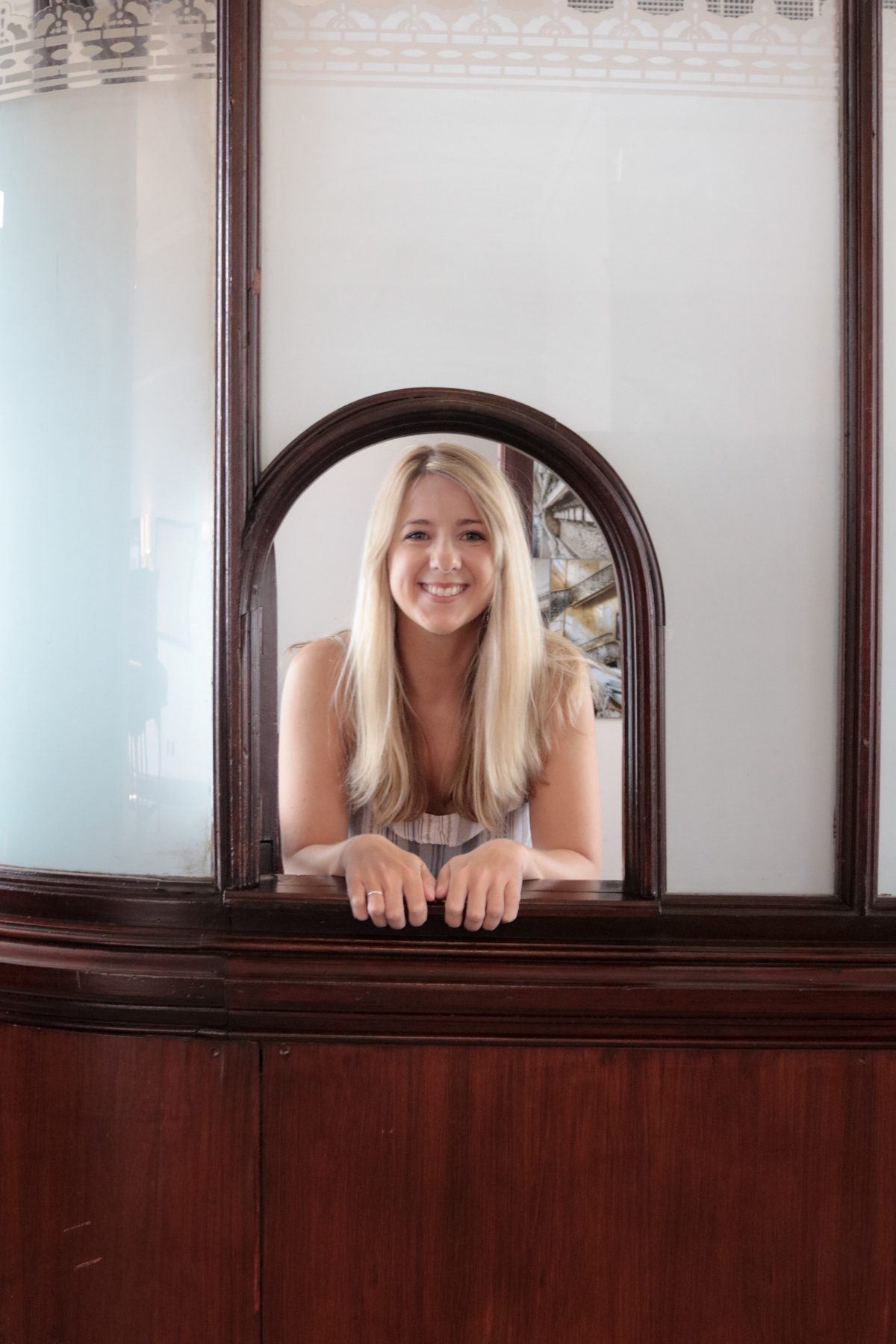 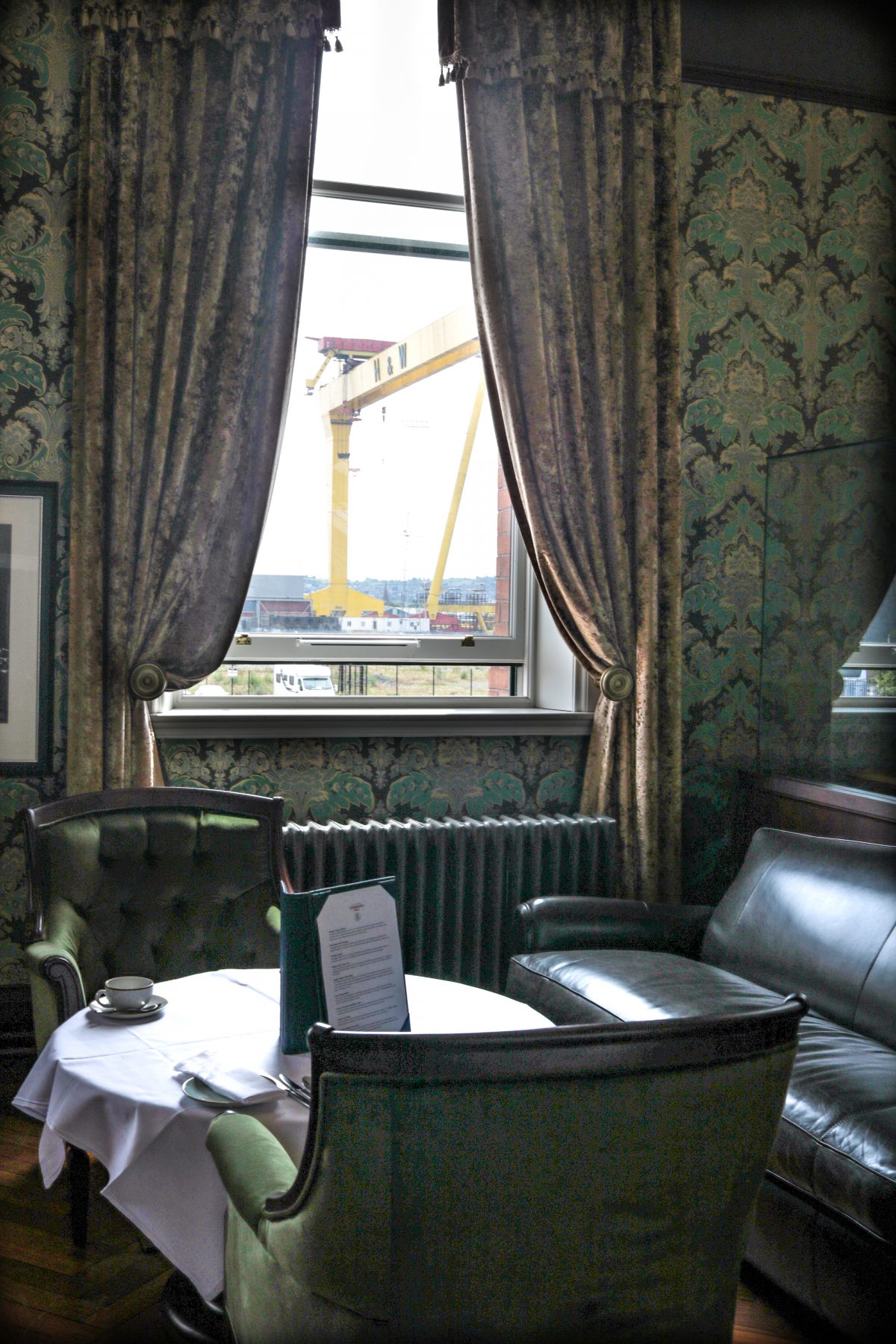 Staycations are a real treat not just because it feels super luxurious but also because it can help us fall in love with our own city. For me it was an absolute game changer and I've a feeling I'll be good at playing tourist in Belfast from now on especially with hotels like the Titanic to welcome me. Note: the Titanic Hotel invited us to stay and have dinner however all opinions in the post are of course my own! If you would like to experience the maiden summer packages the hotel are offering this season then you can check out the special offers here.

Surviving February: 6 Actions to Take When You're Ready to Make a Change