BBQ Recipes to Welcome the Summer

Irish people don’t tend to take a run of good weather in their stride. There’s not a hint of nonchalance when there’s a chance you might be able to do something after work other than spending five hours deciding what shite to watch on TV. So when there were a few consecutive days of temperatures reaching over 15 degrees, an impromptu BBQ just had to happen. We’re only in our new house over a month so this was our first time hosting a BBQ together. We aren’t exactly equipped to host outdoor gatherings as yet so improvisation was key to pulling the whole show together. Andrew had gotten a coffee table for free from someone he used to work with (he has quite a knack for accumulating free stuff… a talent which sometimes comes in handy, sometimes not so much) so we dragged it out to the middle of the grass in the back garden. I had a genius idea of creating a ‘boho’ theme by throwing lots of pillows around the table and decorating with flowers and candles but really it was because we had nothing else to use! 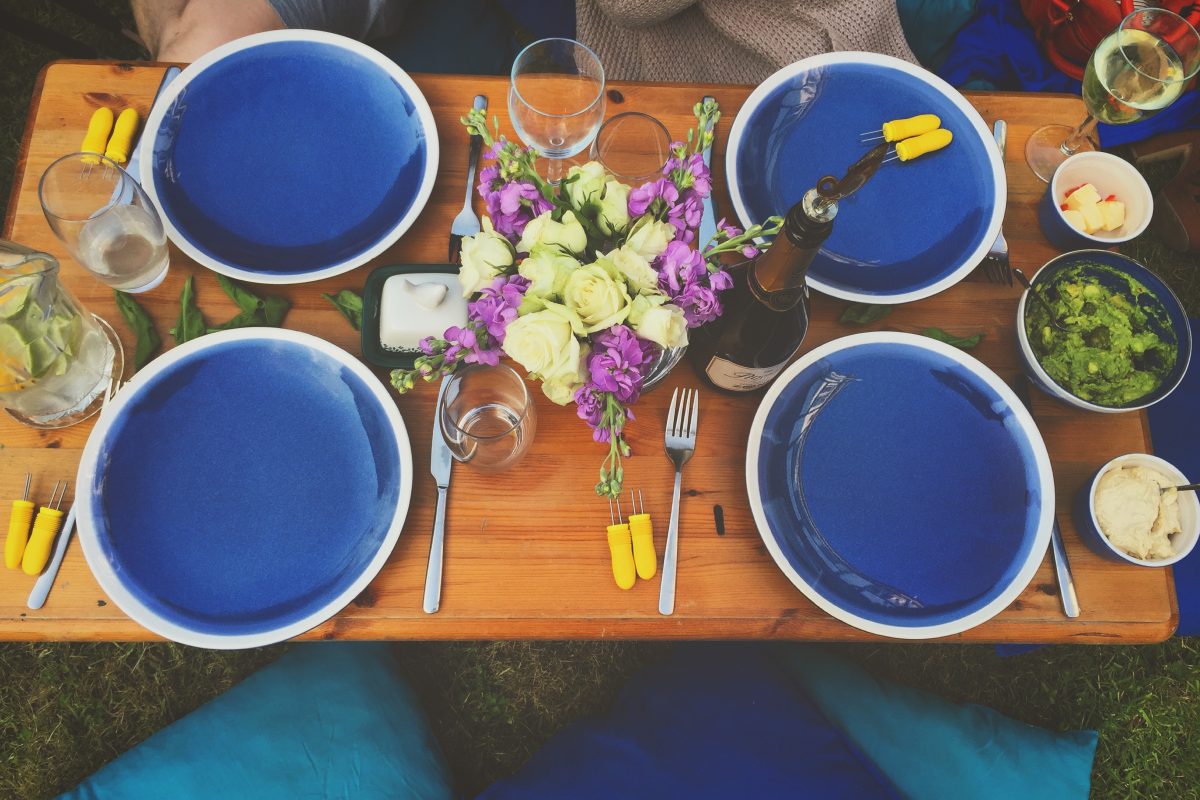 We only had two people coming over - our friends Caoimhe and Lenny - which took some of the pressure off. However, this still didn’t seem to prevent the stress when I realised they were due in a half hour and I had been too busy curating my Aladdin theme instead of actually preparing the food. Andrew claimed his title of ‘BBQ Guard’ which involved standing over the kettle BBQ, a last minute purchase from Homebase, and doing pretty much nothing for a while other than poking coals with a stick. What is it with men and fires? He was all stressed that the coals weren’t hot enough, running off to the shop to get more coals. Meanwhile I was sweating bullets in the kitchen knowing I had to prepare ALL THE FOOD. 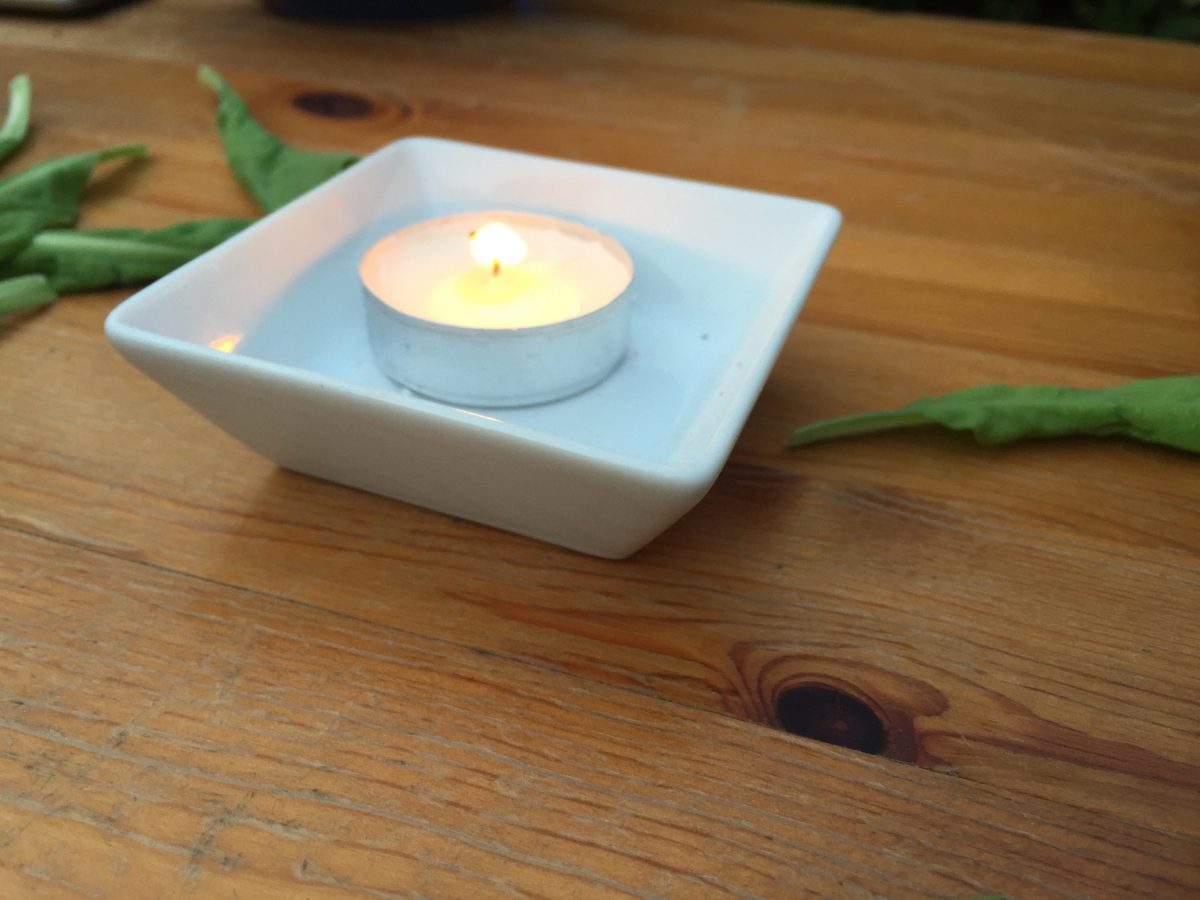 The whole thing reminded me of the annual family BBQ we had as kids when the one week of good weather would arrive. Dad, him being a man and all, was of course ‘BBQ Guard’ but seemed to be more concerned about his supply of cold Buds than the dinner itself. For fear of food poisoning I suppose the sausages usually resembled carcinogenic pencils which we rolled up in a slice of bread with some ketchup. We rarely had hot dogs in buns because someone either forgot them or there was none left in the shop with every other family in town having the exact same idea. A favourite way of cleansing the charcoal grit from our palate was having at least five ice cream wafers after, almost always raspberry ripple flavour. Heaven. Anyway when our guests arrived, Lenny joined Andrew immediately as sous-‘BBQ Guard’. This position has to be handled delicately because the sous ‘BBQ Guard’ should never be overzealous with their advice to prevent the head ‘BBQ Guard’ from becoming flustered and undermined. Lenny was a fantastic sous ‘BBQ Guard’, and provided lots of helpful comments such as ‘Those burgers look grand’ and ‘You’re right, it does take the charcoal a long while to heat up’. 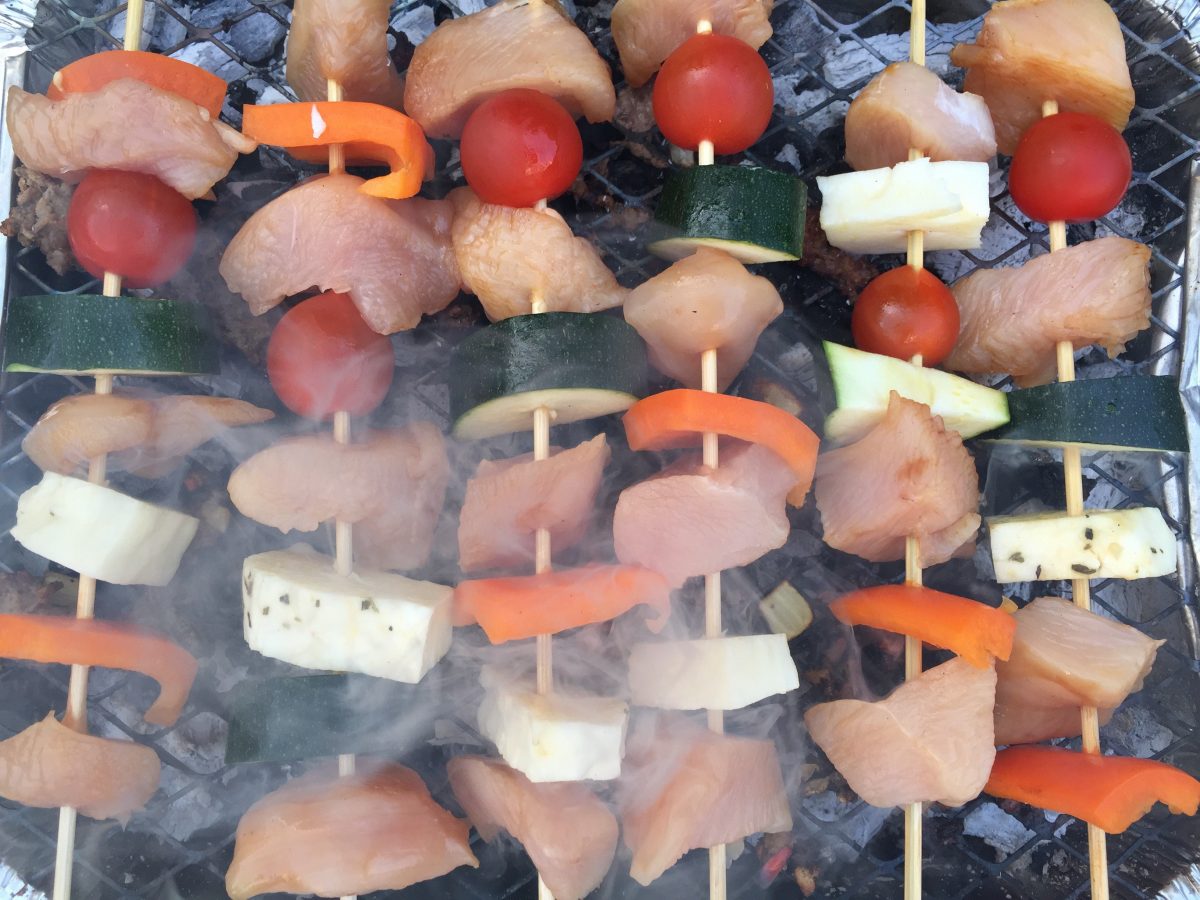 When everything was finally ready and Andrew was certain he wasn’t going to inflict anyone with salmonella poisoning, we sat cross legged and it felt just like Morocco. I was actually a bit impressed with the spread! There were homemade burgers, chicken skewers, corn on the cob (always), sweet potato fries, cous cous and an amazing salad which Caoimhe made (and was much too sophisticated for our basic BBQ). It was a great success and after our desserts (meringue with cream, ice cream and berries – no ice cream wafers here) we moved the table away and sat around the coals keeping warm until the stars came out. For a brief moment I felt I was abroad on holiday with sangria in my belly and warmth in my face. 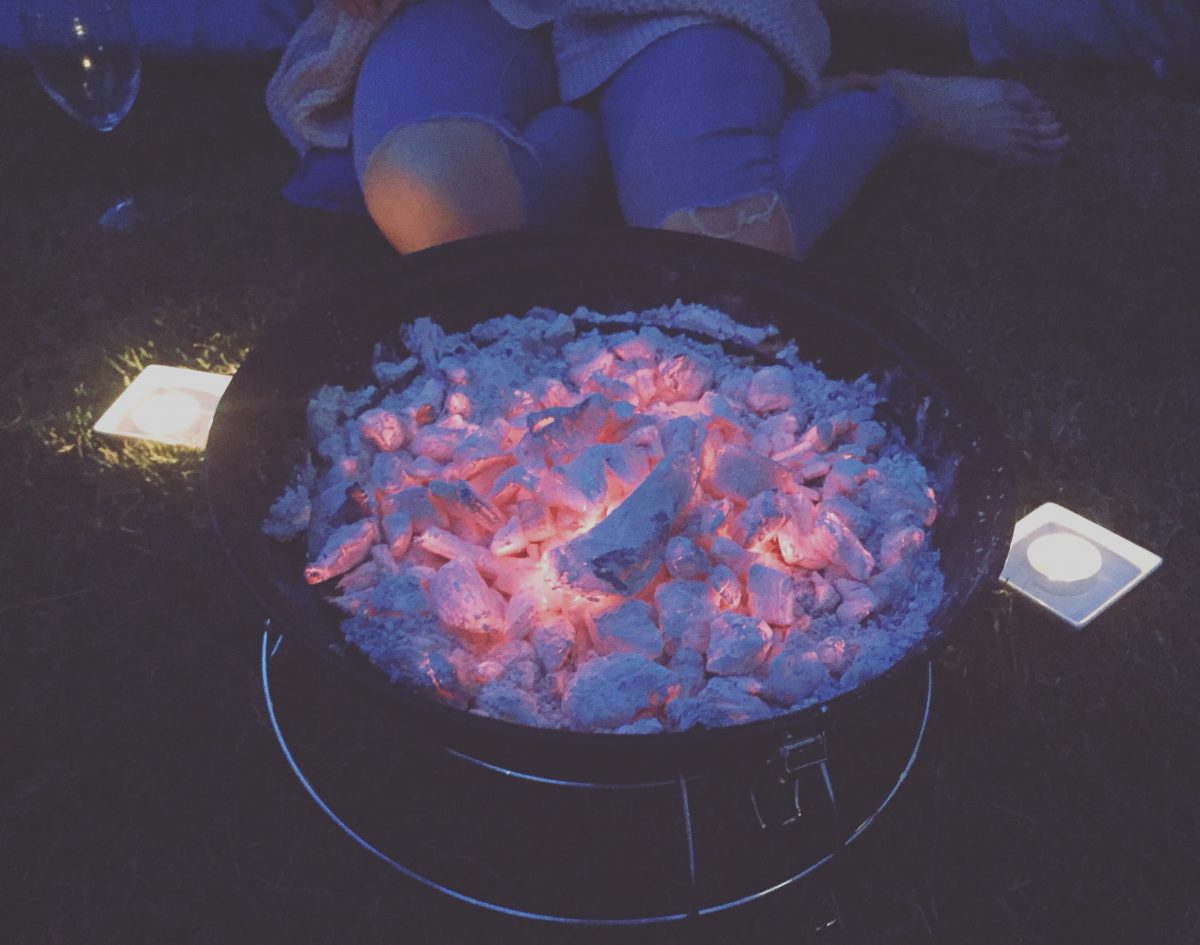 The run of good weather looks like it’s come to an end. I’ll be keeping an ear out for predictable comments such as ‘That’s it, that’s the summer over’, ‘Sure it was good while it lasted’ and ‘Ach but it’s nice to have it cooled down a bit, ‘twas getting a bit too warm there’. I’ll keep our wee Homebase bargain close by in case we’re lucky enough to have another heatwave this year. In the meantime it’s back to the Netflix drawing board.

I am by no means a chef so I don’t use accurate measurements when I cook food. I’ve listed the dishes we made and the ingredients used in them in case you fancy some inspiration but measurements are very rough! 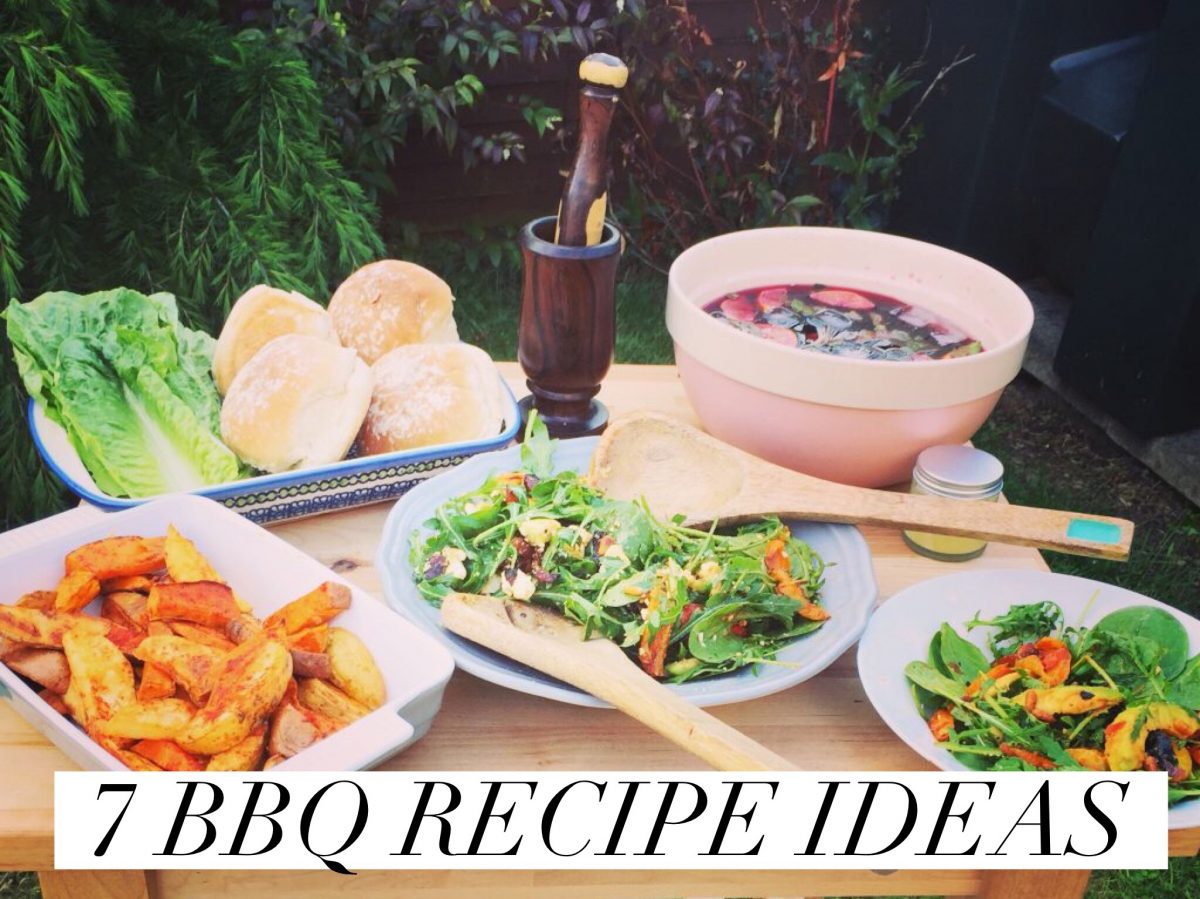