What Not To Worry About #44

Happy Tuesday pals!! It’s been a chilly few days here in Belfast with the snow arriving and characteristically playing havoc with everyone’s lives. I secretly love how people suddenly lose the ability to talk about anything other than the snow and each conversation includes a rotation of the following:

"Mind those roads" - My Dad

“Traffic was mental this morning!” - My colleagues

“Thon road is like an ice rink!” - My country friends

“It’s fairly coming down out there” - My boyfriend

“It gives it to snow all night!” - My little sister

“Ye daren’t leave the house if this carries on…” - Me

Everyone I know becomes an expert meteorologist overnight that can judge the severity of the snow based on the shade of white the clouds turn. While this can be a little irritating (especially when the drama can reach apocalyptic heights - it has snowed before people!), the sense of excitement can be contagious and can encourage festive magic to spread across to even the Scroogiest of Scrooges. On Friday it felt perfectly acceptable to blast Christmas music all day long (the office was practically empty anyway!) as we spent most of the day with our noses pressed up against the windows gazing up at the torrent of snowflakes. 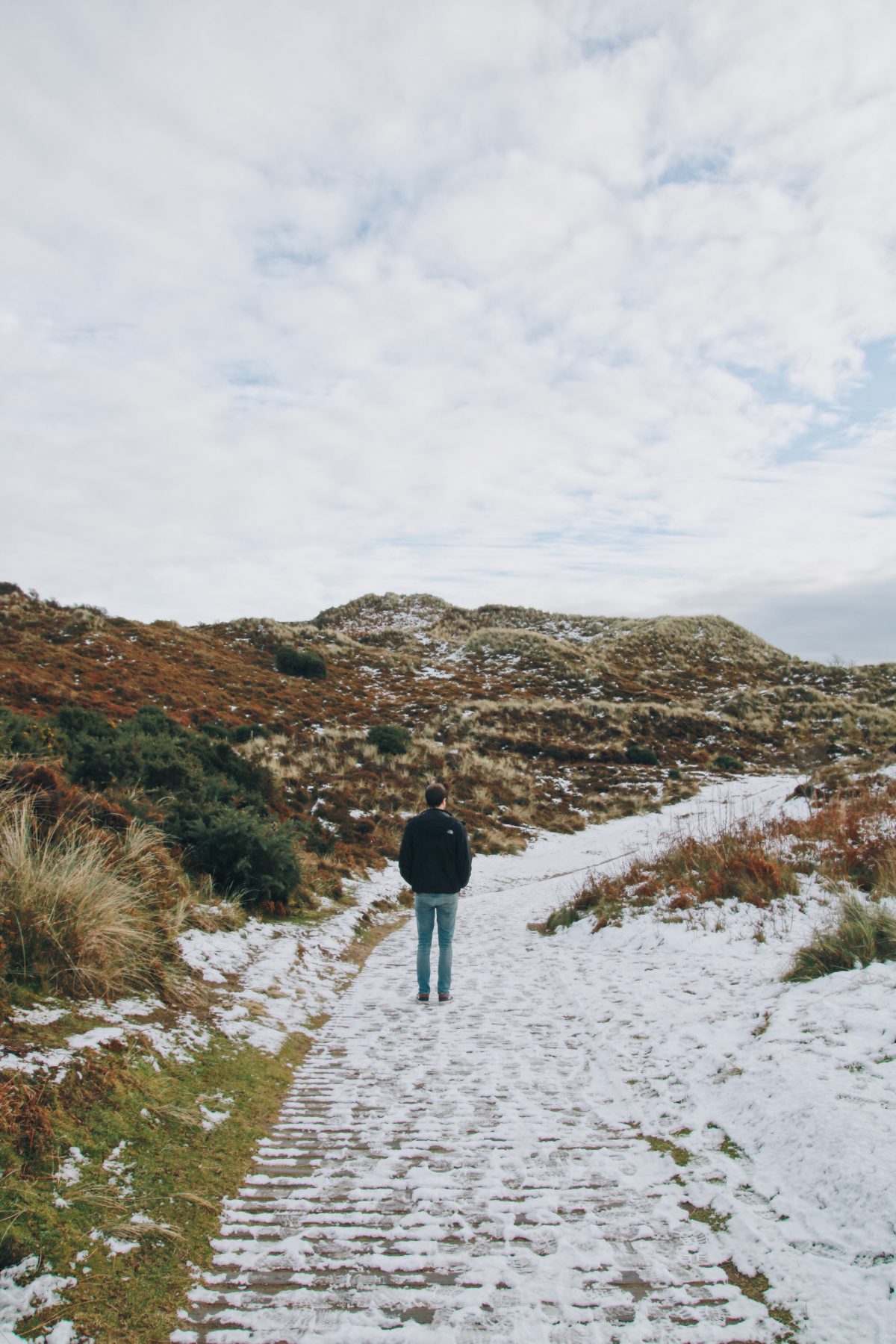 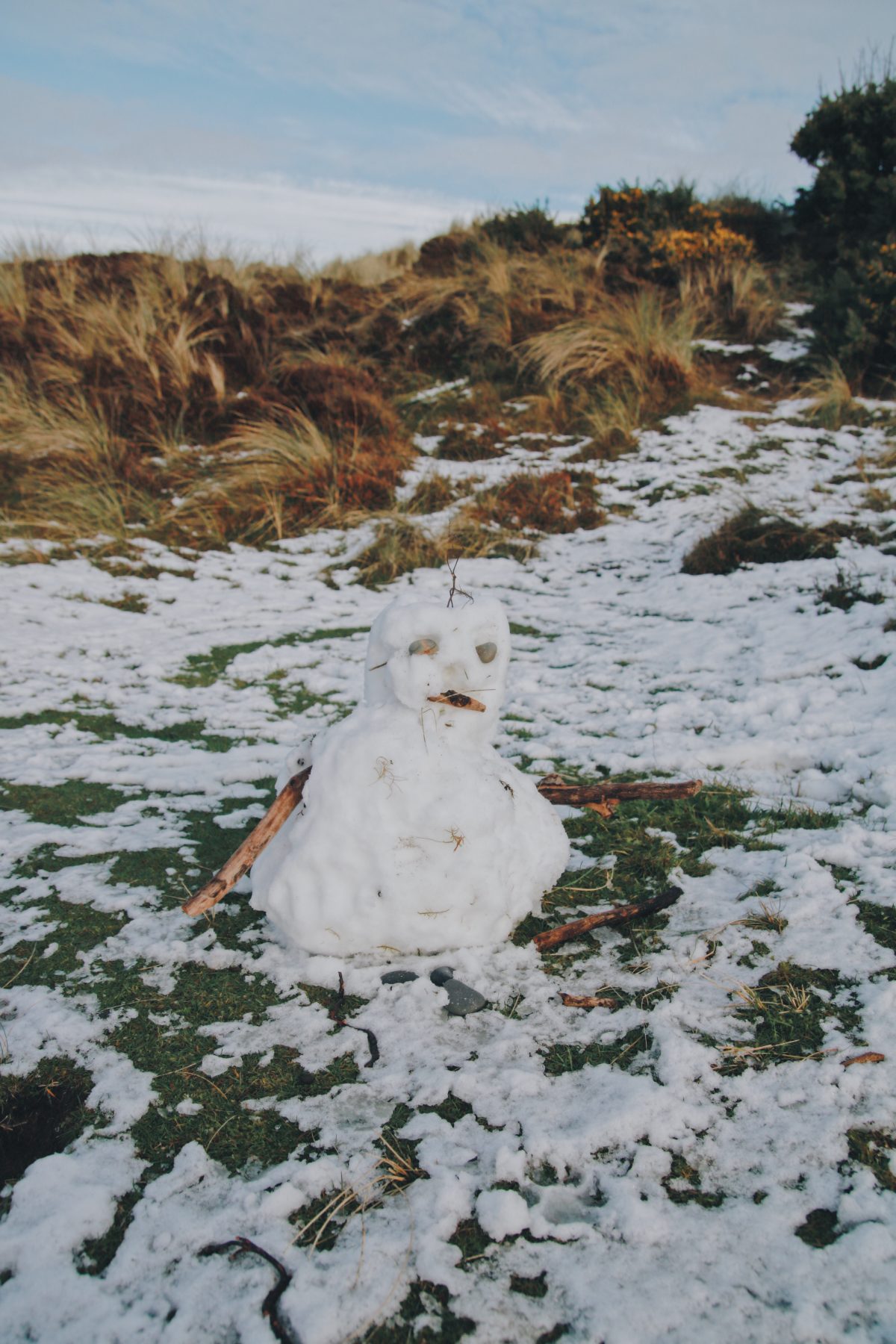 On Saturday we woke up to a blanket of white and I was practically giddy as we drove down to Murlough Bay to walk along a snowy beach. The air was icy but it felt wonderful to walk through the dunes with our coats wrapped up to our chins, spying a few snowmen along the way before reaching the sand. We walked along the waterline, taking pictures of the beach and the snow-capped Mourne mountains towering above us while we still had sensation in our fingers. Feeling thoroughly frozen, we sought refuge in Mourne Seafood Bar in Dundrum to warm our toes and our bellies. We sat beside the log burner which thawed us out in no time and I ordered seafood chowder which, although advertised as a starter, stuffed me to the brim along with the pint of Guinness I washed it down with. 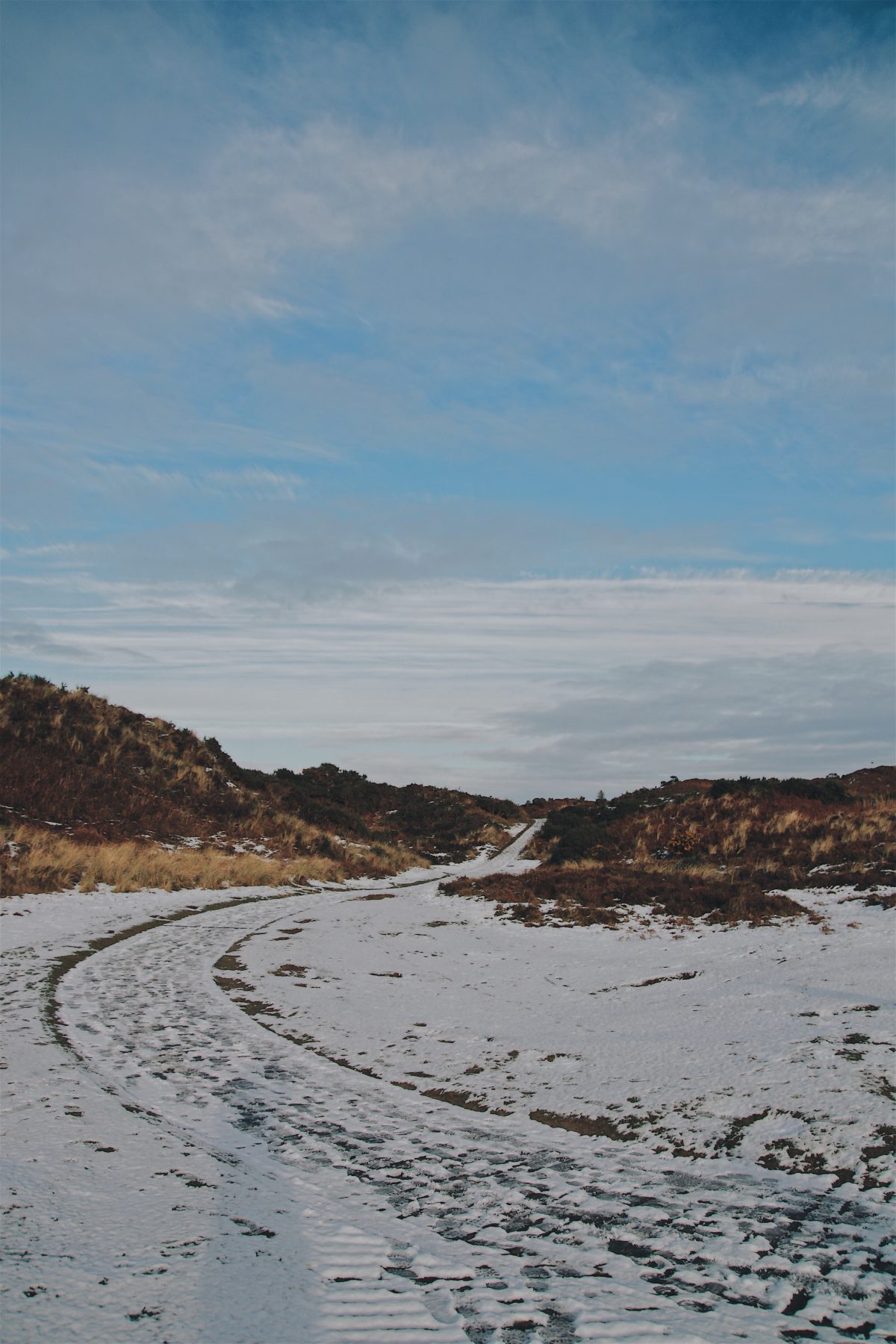 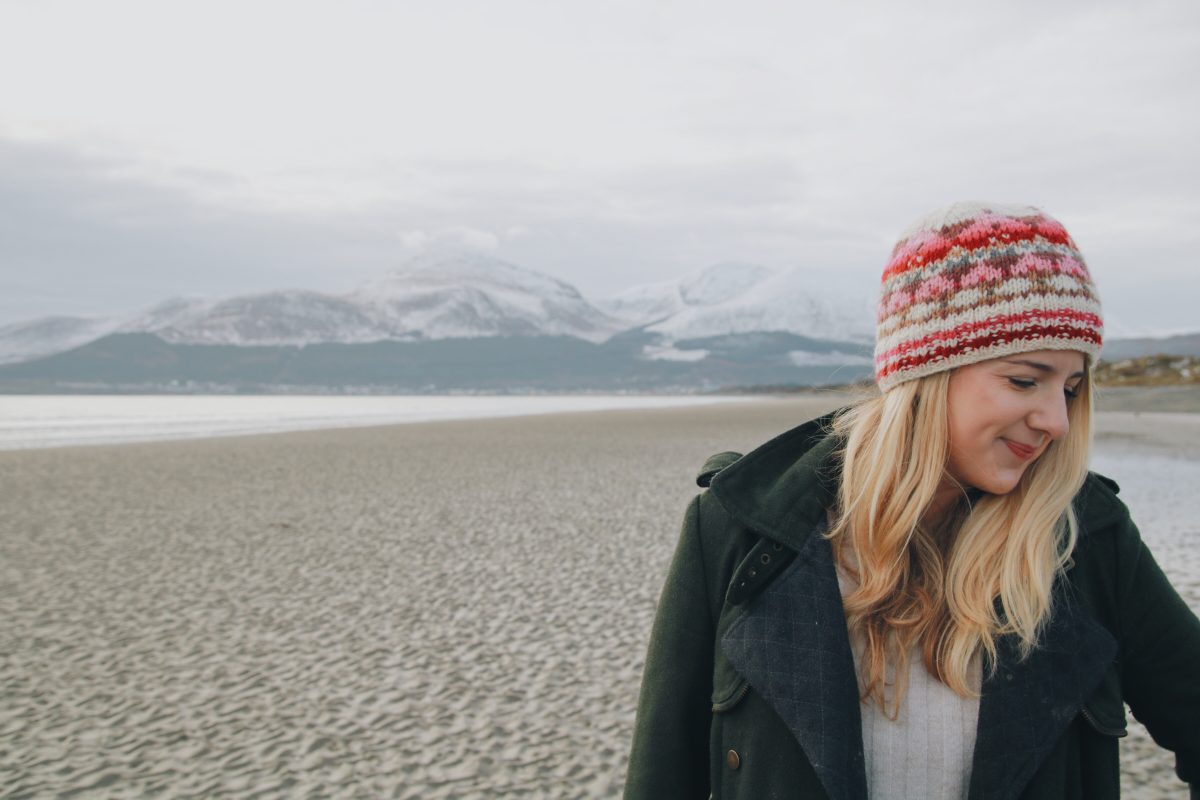 I begged Andrew to take us the scenic route through the mountains to Armagh where we were headed to catch up with family. He eventually relented under the agreement that I would pay for any damage if he was to slide right off the mountain (another snow drama queen). It was worth the risk because it was a winter wonderland up there. Spelga Dam looked like something from a Christmas card with the evergreens dusted with snow alongside the water which was turning gold as the sun set over the mountain. Who knew Ireland could resemble a Nordic paradise? 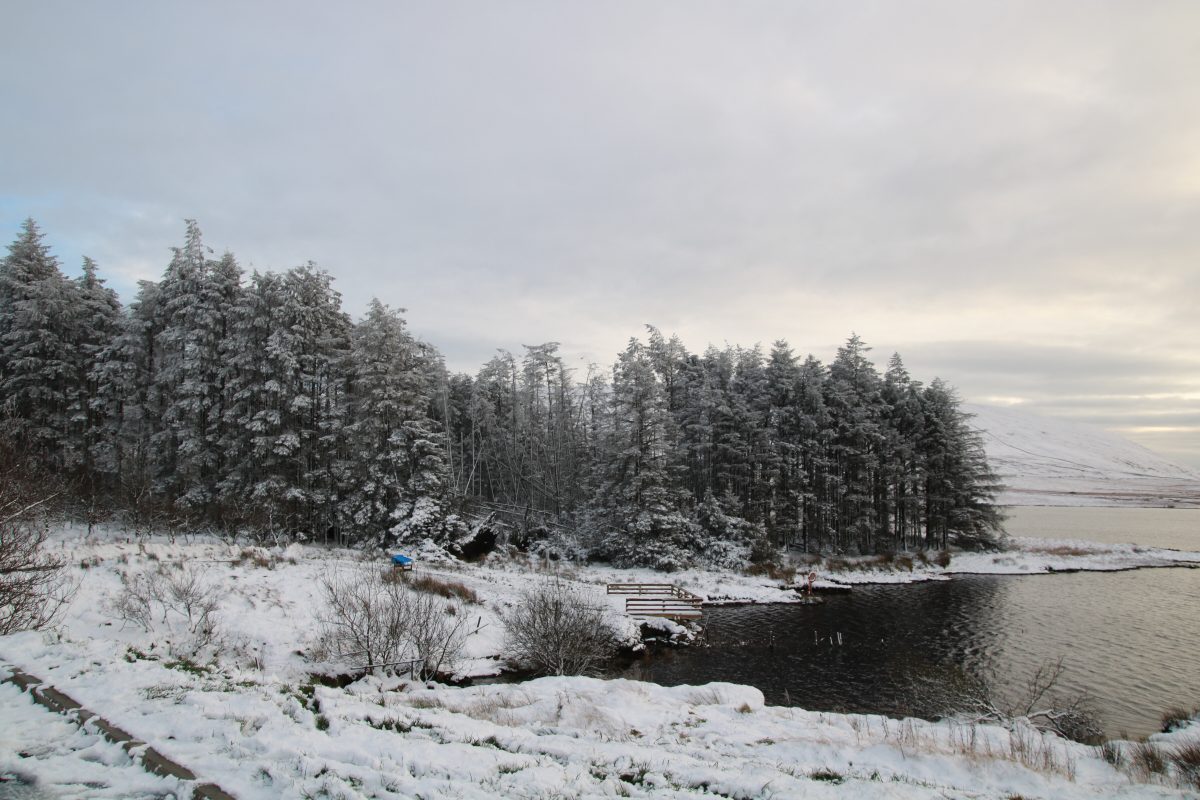 On Sunday there was more snow and more pictures and more delight from me as I watched the sunrise from the country lane by Andrew’s parents’ house (who are always so dumbfounded by my glee at the scenic views they are spoiled with). After a walk with friends, I headed to Downpatrick for an afternoon of pure magic. I have spoken about Mel in the blog before and the Assembly Gatherings she organises for the creative women who are craving connections with other like-minded souls. I attended my first Gathering back in February and it filled me up with so much inspiration I felt capable of just about anything. 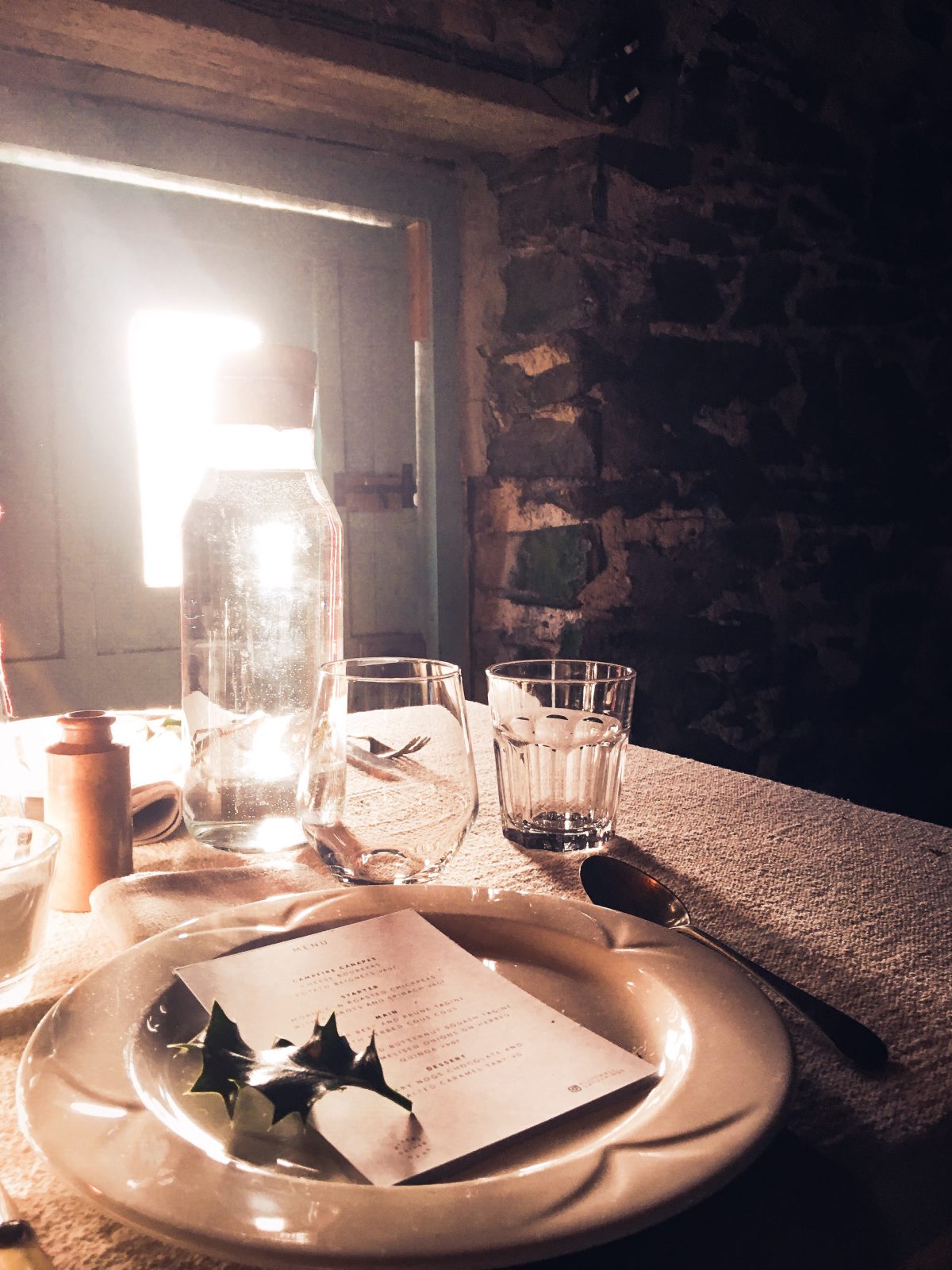 This Gathering was for the festive season and was focused on finding time for ourselves before the whirlwind of Christmas consumes our lives completely. We were told to gather in the hills outside of Downpatrick at Laura Bayley's farmstead where the roads were just a little bit dicey in my new wee Polo! After a white-knuckled drive I arrived when everyone was just sitting down to dine in Laura's stone barn that had been beautifully styled by Grace & Saviour (an Instagrammer's dream!). We ate the most delicious organic food cooked by Laura while I forged connections with the new faces around me (and put faces to Instagram handles!). 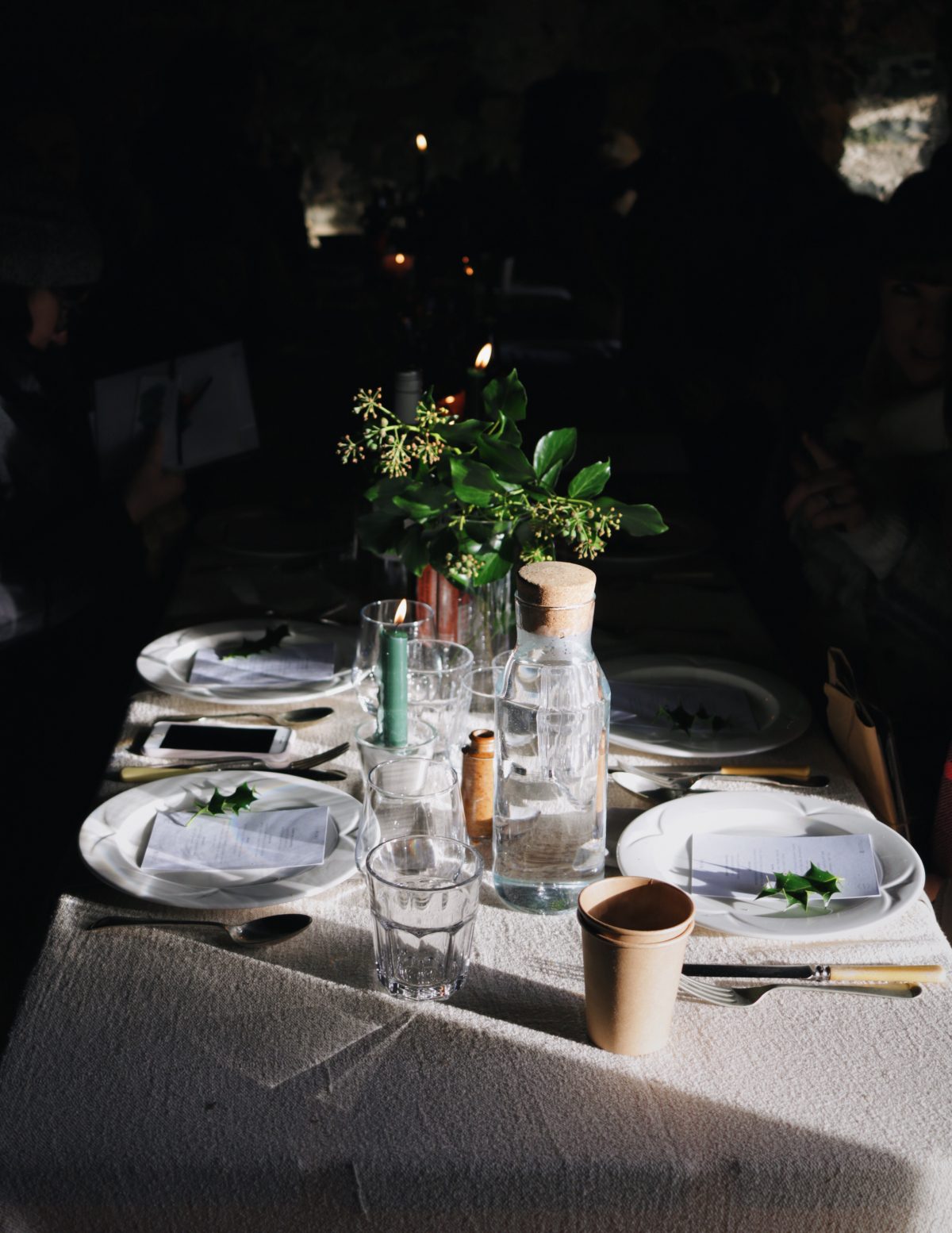 After being stuffed with amazing food, we shuffled in to another room in the barn where we learned about organic chocolate from the lovely women of Nearnógs. We learned how to identify tastes within chocolate and were even given some truffle balls to take home with us which we rolled in our favourite flavouring - yum! 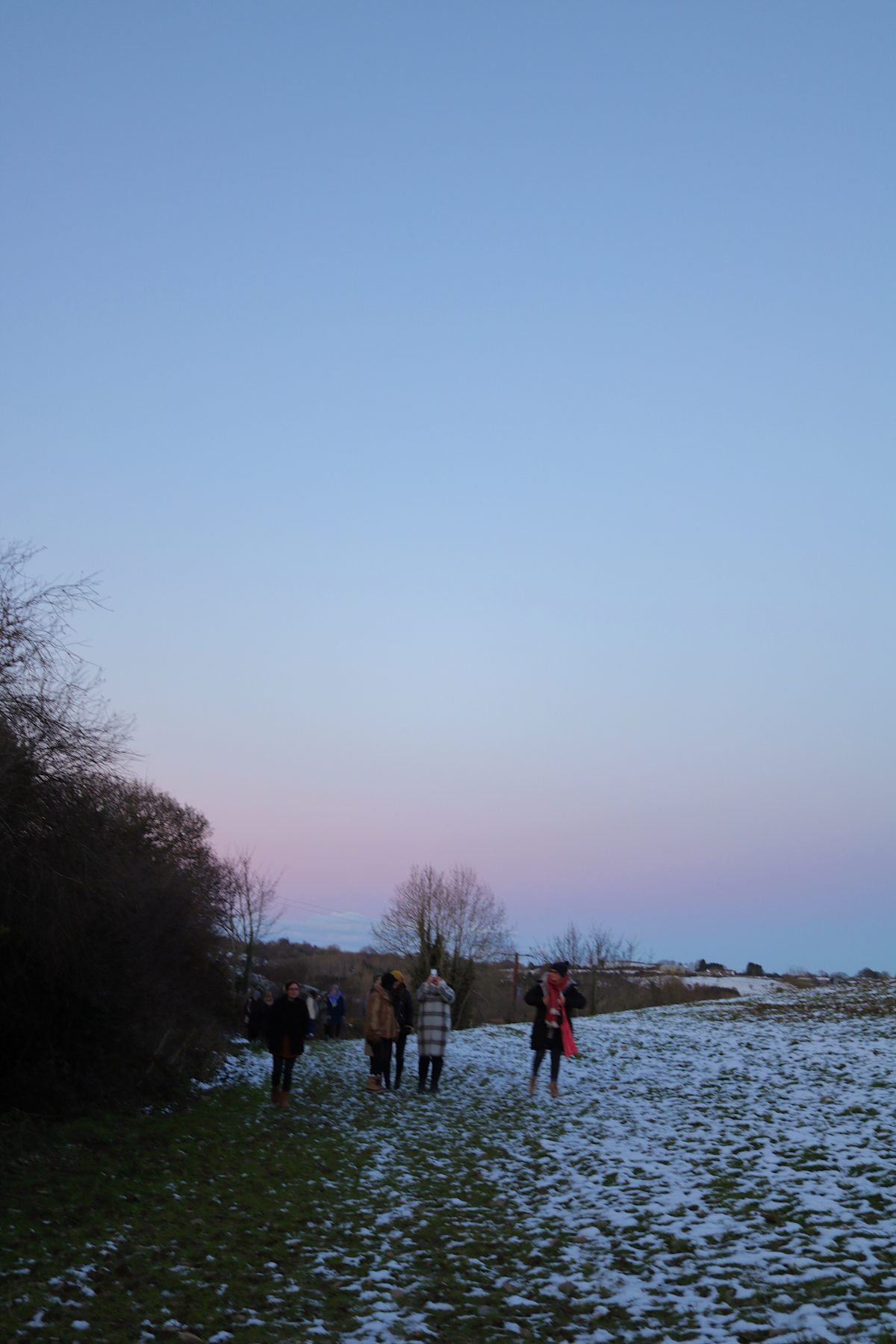 Having been well educated in deliciousness, we braved the bitter cold to go out to the nearby wood to forage for materials to make our own wreaths - you know I love to make a wreath! Janice from Gathered Threads showed us the best pieces to search for while the sky above us turned a crimson pink and the light started to fade. We had our very own workshop to work in after the sun went down, turning a bunch of ferns and evergreens in to something beautiful (if a little rustic in my case!). 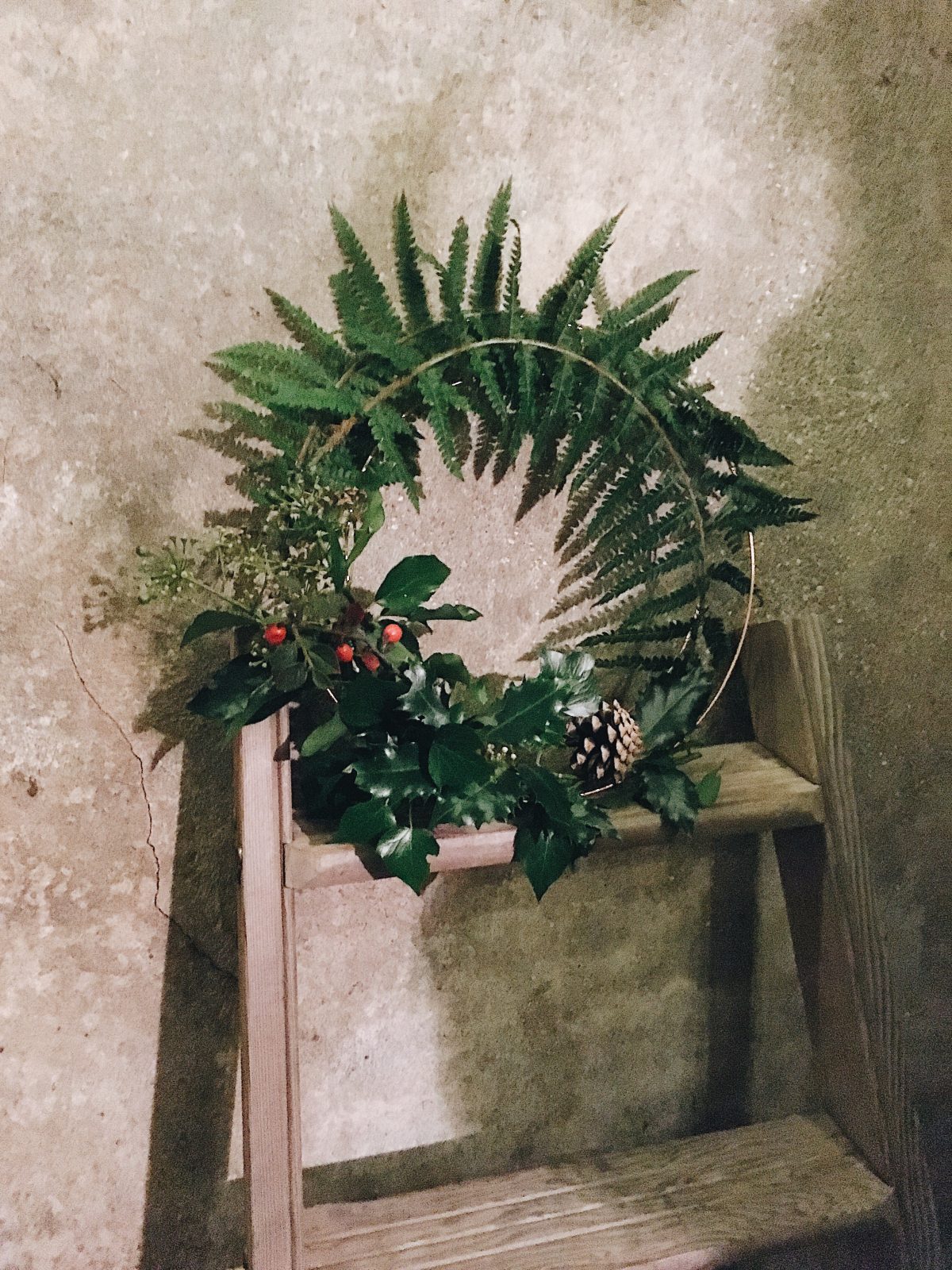 As the temperature plummeted we gathered around the firepit and drank hot chocolate to keep warm. There was a gentle murmur of shared gratitude amongst the group as if we all felt the weight of such a golden afternoon and weren't quite ready to let it go. Eventually we had to head on home to save us losing toes and fingers but I am still feeling the weight of that afternoon and have been carrying it around with me to keep me going during this crazy season. The wreath is hanging above the fireplace too :) And here's a few worries I am letting go of this week: Getting frustrated at Andrew when he is sick - I have zero sympathy when it comes to colds and flus but it turns out some guy actually went out and conducted a study to actually prove that men suffer worse than women when they have flus! I'm still dubious but maybe I should be a little kinder when it comes to sickness, just in case. Having it all figured out - there is so much pressure to know exactly where you are meant to be going and what you're meant to be doing but in reality a lot of us are winging it most of the time. What's encouraging is to know that even some of our personal idols feel the exact same which was why I just loved reading this article. Joanna Goddard is someone who I have looked up to since I started reading her blog Cup of Jo a couple of years ago and it was great to know she's as personable in real life as she is through her words. Blue Planet - the series finished last week and it ended with a pretty ominous message that the plastic crisis is severely affecting the world's oceans and all that live there. This is a very real problem that affects all of us but we can do something, even little things to help improve the future of the world's oceans. Find a few tips here if you want to find out how you can help too. Not reading enough books by women - I have read a lot more books written by men than women; not because I prefer the words of male authors but because it is so much easier for a male to be published than female. John Boyne wrote a great article on why he thinks women are better writers than men and how often he encounters men who write for the prizes rather than for the connection with the reader. Not staying in a tree house - sometimes you just want to run away and live in a treehouse and live up high above the ground. Or even just pay a load of money to stay in a fancy adult version! Check this piece out for some serious treehouse-envy.

Have a great week! 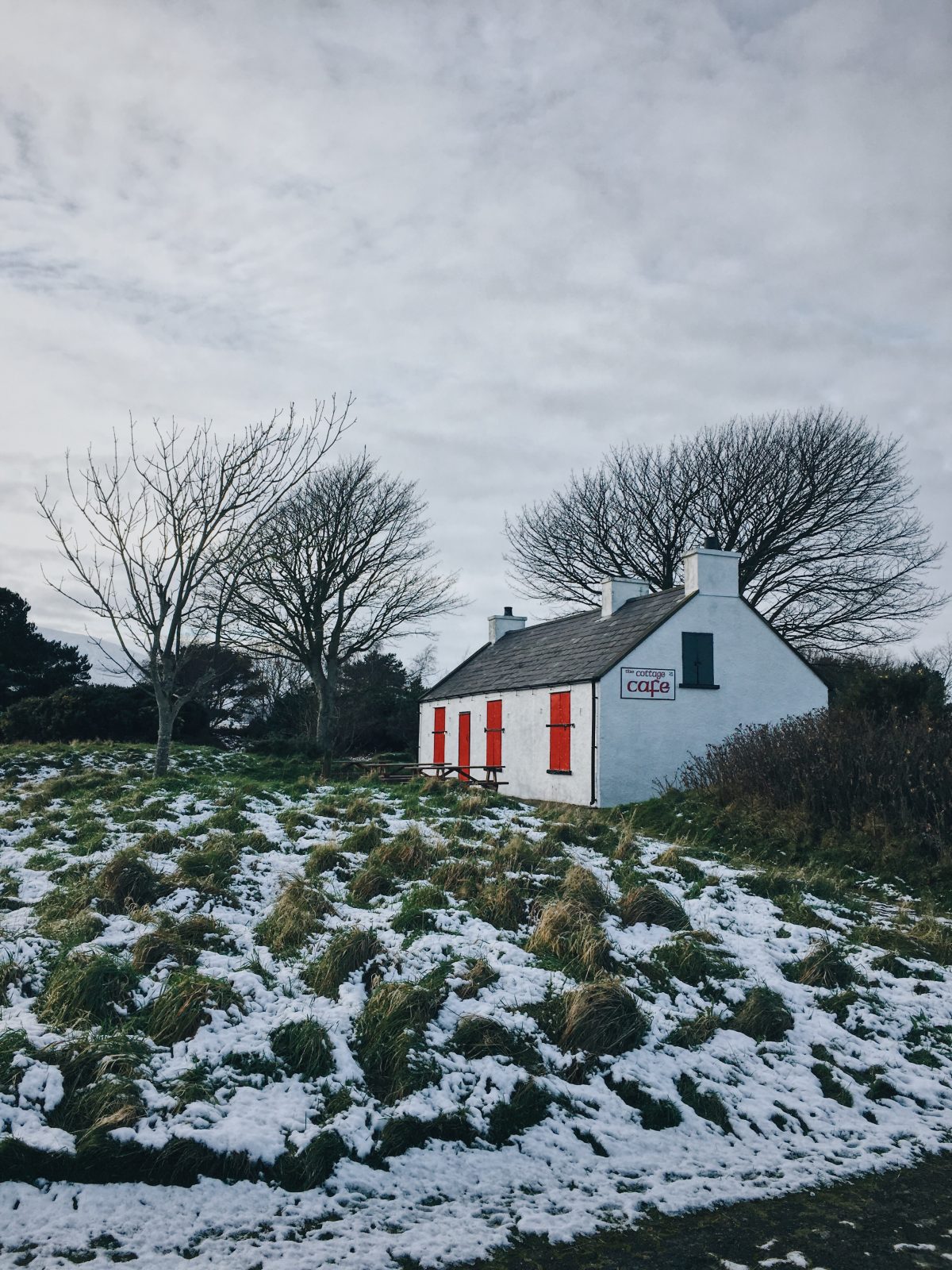 What Not To Worry About #43

What Not To Worry About #45